Case in point: VA05, where Denver Riggleman was a hard-core conservative when he was in Congress (e.g., Progressive Punch rated Riggleman the #394th most progressive member of the House, with a 5% lifetime progressive rating and an “F” score vs. “District Tilt”; Riggleman got a 0% rating from Planned Parenthood, an 85% rating from the “Family Research Council,” a 95% rating from “Heritage Action,” a 0% from the Human Rights Campaign…), yet STILL was ousted in a Republican nominating contest by someone even FURTHER right, if that’s even possible, an extremist named Bob Good, who currently (mis)represents VA05 in Congress.

So now, Good is being challenged by…yep, a self-described “conservative Republican” named Dan Moy. Looking at his positions on the issues, it’s hard to see much daylight between him and Good:

In other words, pretty much the same agenda – if not as much of the wild rhetoric – as Bob Good. The question is, will VA05 Republicans choose to oust Good – who epitomizes the far-right, anti-democracy, conspiracy-theorizing populism known as “Trumpism” – for someone who MIGHT be slightly less “Trumpy?” We’ll find out on May 21, when VA05 Republicans – or at least the hardest core of them – assemble to select their 2022 nominee.It should be…uh, interesting? 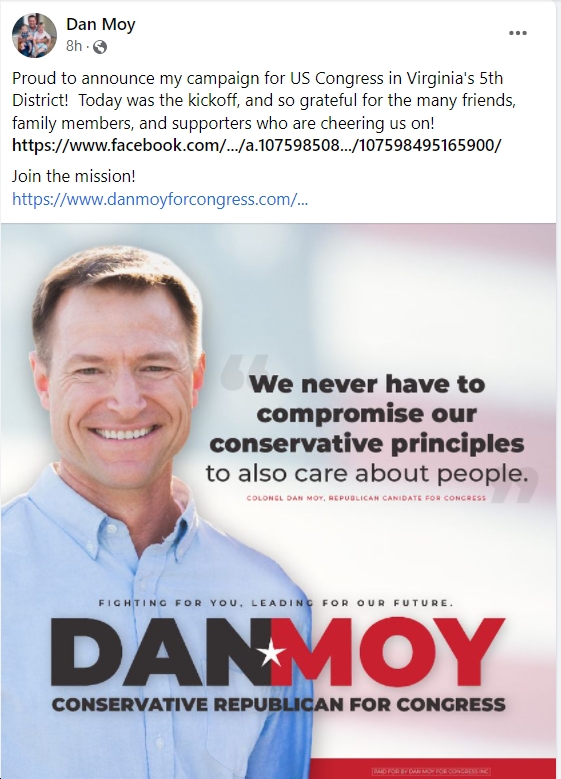