By letter dated February 9, 2022, the U.S. Army Corps of Engineers (Corps) has verified that its evaluation of an application for a Clean Water Act section 404 permit for the Mountain Valley Pipeline will not proceed unless and until the U.S. Fish and Wildlife Service (FWS) provides a valid Biological Opinion for the project.

David Sligh, Conservation Director for Wild Virginia, stated: “The Corps has appropriately acknowledged its legal duty – to halt its MVP review unless it gets assurance that some of our rarest and most sensitive species will be protected. We encourage all federal officials to take a step back now and do what they should have done from the beginning. It becomes clearer by the day that this project cannot be completed in a way that meets our environmental laws, and that realization should put an end to the project. The Biden administration has expressed its commitment to reversing the harmful regulatory rollbacks of the Trump years. The decisions yet to be made on this pipeline are a perfect chance to make that commitment real.”

A legal analysis that supports the Corps’ decision was presented in a February 4, 2022 letter from Appalachian Mountain Advocates, on behalf of Wild Virginia and allied groups. 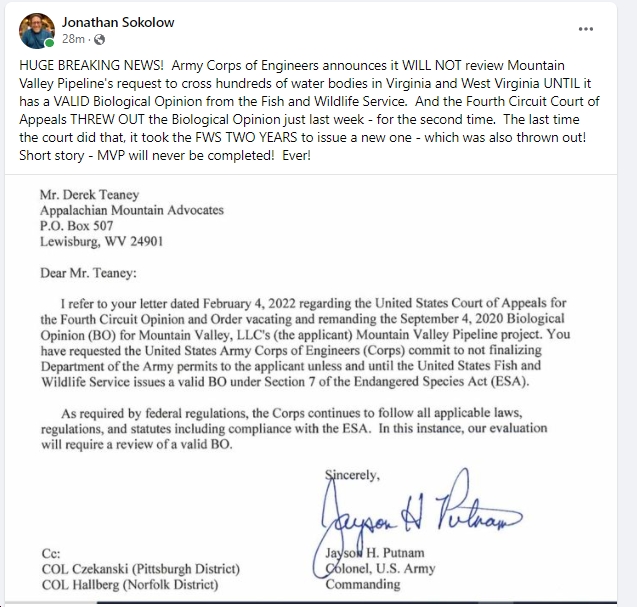 In Yet Another Significant Blow to MVP, Army Corps of Engineers Signals Stream Crossing Permit Will Be Indefinitely Delayed Following Latest Court Decision

Washington, DC — This week, the U.S. Army Corps of Engineers committed to withhold a Clean Water Act Section 404 permit for the Mountain Valley Pipeline (MVP) at least until the project has a valid Endangered Species Act biological opinion. This confirmation was received in response to a letter from Appalachian Mountain Advocates and the Southern Environmental Law Center. The 404 permit, if issued, would allow for the pipeline to trench and blast through hundreds of streams and wetlands in its path.

This is another serious blow to the beleaguered project, which has already had several key permits rejected by the courts. In early February, the 4th U.S. Circuit Court of Appeals invalidated the biological opinion and incidental take statement issued by the U.S. Fish and Wildlife Service under the Endangered Species Act for the Mountain Valley Pipeline. That decision came on the heels of the court’s late-January invalidation of U.S. Forest Service and Bureau of Land Management approvals for the second time, preventing the pipeline from crossing the Jefferson National Forest.

The Corps’ response casts further doubt on the future of the Mountain Valley Pipeline and means that for the foreseeable future the pipeline will not be able to build across streams, wetlands and several major rivers. Those crossings threaten long-term degradation of water quality.

“That the Corps did its job, simply by following the law — gives hope. Southwest Virginia, together with our neighbors to the west and the south, have endured eight years of MVP abuses, specifically to our exceptional waters that are the life force of our forests, aquifers, karst, wetlands and floodplains. By following the law, the Corps has answered the moral imperative of the climate emergency — that in supporting our most fragile biological species and the waters they depend upon, we protect our people — and their future on Earth — over profit,” says Roberta Bondurant, a member of Preserve Bent Mountain, a chapter of Blue Ridge Environmental Defense League (BREDL), and Co-Chair of Protect Our Water, Heritage, Rights Coalition (POWHR).

“The recent letter from the Corps means MVP can’t be granted an ‘all access pass’ to our waterways before the pipeline’s effects on endangered fish are carefully studied,” Sierra Club Senior Organizer Caroline Hansley said. “This project has already received major setbacks with permits still missing and more being challenged, along with millions of dollars in fines for hundreds of violations of clean water protections. Not only is MVP billions over budget and more than three years behind schedule, MVP still has hundreds of difficult waterbody crossings left to complete. Investors and lenders should walk away from this unjust and unneeded project. We all have a right to clean water and will continue to make sure our communities are protected.”

“The Corps’ decision to delay action on the 404 permit is the right course at this time,” said Peter Anderson, Virginia Policy Director for Appalachian Voices. “We will continue to hold the unnecessary Mountain Valley Pipeline accountable for all of its serious flaws and the harms it inflicts on our communities.”

David Sligh, Conservation Director at Wild Virginia stated: “One resource agency after another has failed the public in granting ill-considered and improper approvals for the Mountain Valley Pipeline. In this case, the Corps has acknowledged its legal duty and that gives many of our precious and sensitive streams a reprieve from MVP’s damages. Now is the time for federal officials to finally stop this project, which has already caused so much pain and pollution in the affected communities.”

“Climate change poses a ‘code red for humanity,’ according to the world’s leading scientists. The last thing we need is another massive pipeline that will prolong our reliance on dirty fracked-gas, harm Virginia’s streams and rivers, and trample on people’s property rights,” said Anne Havemann, general counsel with the Chesapeake Climate Action Network. “As permit after permit gets thrown out or delayed, it’s time for MVP to see the writing on the wall and abandon the project.”

“This is very good news about a project and a route that never should have been allowed,” commented Bill Wolf of Preserve Craig, Inc.

“Endangered species like the candy darter and Roanoke logperch are nature’s ‘canaries in the mines’ — a warning to us all about the health of our water, air and entire ecosystem. We appreciate that the Army Corps of Engineers is paying attention and will not complete its review until a valid Biological Opinion is in place,” commented Howdy Henritz, president of Indian Creek Watershed Association.

About the Sierra Club

The Sierra Club is America’s largest and most influential grassroots environmental organization, with millions of members and supporters. In addition to protecting every person’s right to get outdoors and access the healing power of nature, the Sierra Club works to promote clean energy, safeguard the health of our communities, protect wildlife, and preserve our remaining wild places through grassroots activism, public education, lobbying, and legal action. For more information, visit www.sierraclub.org.

About the Protect Our Water, Heritage, Rights Coalition

Protect Our Water, Heritage, Rights (POWHR) is an interstate coalition leading the fight to stop the Mountain Valley Pipeline. The coalition includes individuals and groups from counties in Virginia and West Virginia dedicated to protecting water, land, and communities from fossil fuel expansion and environmental injustice. For more information, visit our website: powhr.org.