Recall that back in January, Virginia’s new Attorney General, right-wing Republican Jason Miyares, summarily removed UVA’s university counsel, Tim Heaphy, who “had been on a leave of absence from the University working as the chief investigative counsel for the Select Committee on the Jan. 6 attack on the U.S. Capitol.” As former Democratic National Committee spokesman and Virginia resident Greg Greene (@ggreeneva) wrote at that time:

“I’m unsure why it makes sense that the AG of Va. _can_ fire the university counsel at U-Va., but we can make a good guess as to why he _has_: retribution for his role, while on a leave of absence from C’ville, as chief investigator for the 1/6 committee.“

“Virginia’s Attorney General [Jason] Miyares took office less than three weeks ago but has already made headlines for all the wrong reasons. While his decisions to fire the well-respected counsels of UVA and GMU — Tim Heaphy and Brian Walther, respectively, were bad enough, when viewed through the lens of Heaphy’s service to the Congressional panel investigating the January 6 Capitol Insurrection, one must question Miyares’s motives. It’s also no coincidence that Miyares has already announced that Anne Gentry, the spouse of a Koch brothers’ major fundraiser, will serve as Walther’s successor.”

So…Miyares announced that “the spouse of a Koch brothers’ major fundraiser” would serve as the replacement for the GMU counsel. And now, Miyares has announced the successor to Heaphy at UVA:

Miyares’ office announced the appointment of Cliff Iler as UVA’s new counsel Friday, more than three months after the firing of Tim Heaphy, who had worked for the university for about three years…Iler has experience working in universities, serving as the deputy general counsel for the Faculty, Students, and Research Group in the Office of Legal Counsel at the University of Kentucky.”

According to a statement by Miyares, “Cliff is a brilliant attorney with over a decade of experience in higher education and healthcare law. I am confident he will be an excellent addition to the University of Virginia and serve the students, faculty, staff, and Commonwealth well.”

Now, here’s some more information about Iler that Miyares conveniently doesn’t mention: back in 2018, Iler hosted an evening with none other than Oliver North. Yep, the same Oliver North who – as you probably recall – was central to the Iran-Contra scandal during the Reagan administration, for which he was “initially convicted on three felony charges, but the convictions were vacated and reversed and all charges against him dismissed in 1991.” North also “unsuccessfully ran for the U.S. Senate seat held by Chuck Robb from Virginia in 1994, receiving 43% of the vote.” Also, “In May 2018, North was elected as president of the National Rifle Association.” In short, Oliver North is a hard-right hero all the way.

So anyway, Iler – who was then Chair of the Board at the Lexington (KY) Christian Academy – back in February 2018 hosted Oliver North as the keynote speaker for an event entitled, “Faith, Family, & Freedom: An Evening with Lt. Col. Oliver North.” I couldn’t find video of the event itself, but Iler’s summary of the event, as you can see below, said:

“Hello, I’m Cliff Iler, current chairman of the board of the Lexington Christian Academy. I want to share with you about a remarkable event hosted by our school this past Thursday: ‘Faith, Family and Freedom: An Evening with Lt. Col. Oliver North.’ This night was so much more than a fundraiser; it was a launching pad for a movement within our school and our community. The energy, dedication and support gathered in that room was powerful, and the focus on the importance of Christian education was meaningful and inspirational to all who attended. Lt. Col. Oliver North focused on three ‘g’s that night – ‘guts, grace and give.’ Over the next several months, we are going to reference Col. North’s three ‘g’s…I challenge each individual who attended this wonderful evening to share the highlights of Col. North’s speech…”

In sum, Miyares’ appointment to replace Tim Heaphy as UVA’s new counsel, is a big fan of far-right Oliver North, who was a central figure in the Iran-Contra scandal, who headed up the National Rifle Association, who Nancy Reagan condemned for having “lied to my husband and lied about my husband” and for having “a great deal of trouble separating fact from fantasy“; etc. Bottom line: you couldn’t get any more ideological – and less technocratic – than this pick by Jason Miyares! 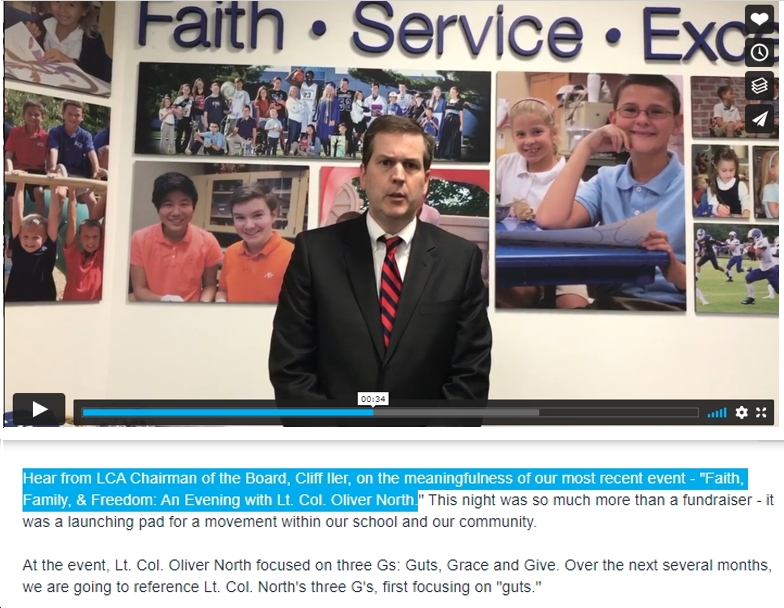