According to a new analysis by FiveThirtyEight.com (“How Redistricting Affects The Battle For State Legislatures”):

“The Virginia House of Delegates could also swing back to Democrats’ control under its new map. Because of the delayed release of the 2020 census, the 2021 elections — which surprisingly saw Republicans take control of the chamber — were conducted under Virginia’s old state House map, which had a slight GOP bias (an R+4 efficiency gap and R+3 median-seat bias). However, under the new map (which was drawn by a pair of bipartisan experts), the median seat almost exactly matches the state’s D+5 partisan lean. On paper, the Virginia state Senate is a tougher climb for Republicans [note: presumably FiveThirtyEight meant to write “Democrats?”] (with a median seat about 3 points bluer than the state as a whole), but Fiddler at Daily Kos said she’s still keeping the chamber on her radar.”

Personally, I think it’s going to be a major battle (but definitely doable!) for Democrats to hold their narrow 21-19 State Senate majority. It’s absolutely crucial, of course, that Democrats do so, or else…watch out, as Glenn Youngkin could end up with a Republican “trifecta,” then move to pass all kinds of crazy/extreme laws, such as we see in Florida, Texas, Oklahoma, etc. As for the House of Delegates, Democrats definitely have a shot of taking it back, the main variable being what the national political climate looks like next year (assuming courts don’t pull a shocker in the next few months and order new VA House of Delegates elections THIS year…).

P.S. “Hat tip” to Sam Shirazi for noticing and tweeting about the FiveThirtyEight piece… 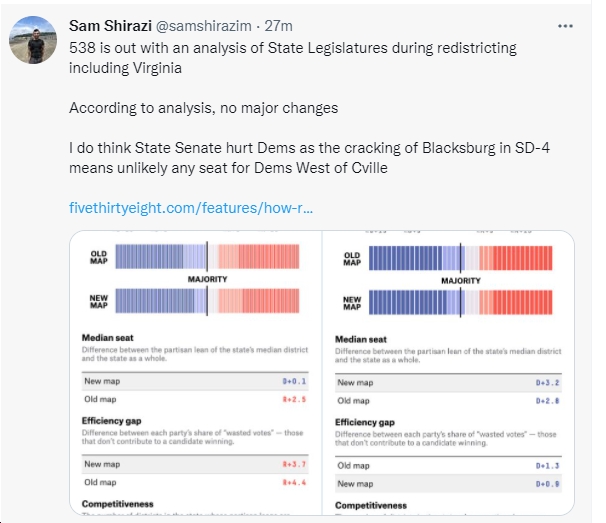