On Wednesday evening, Roland Martin was busy schooling Scott Pio, the Loudoun GOP chair who asked back in October 2011, “Do you think the sea level would lower, if we just took all the boats out of the water?” and who also, After Confirmation of Ketanji Brown Jackson, Loudoun GOP Chair Claims Historically African American Sorority Delta Sigma Theta Is “taking control of our country at all levels of govt”. Completely, bats**t crazy. And yes, this guy really is the *chair* of the Loudoun County Republican Party. Can you even imagine Virginia Democrats putting someone like this in charge of one of their largest local committees? Uh, no.

Anyway, last night, Loudoun County Chair Phyllis Randall – who Pio repeatedly attacked because – as Roland Martin put it – “she’s a Delta and she’s a proud Delta,” and because a bunch of Deltas took a photo of themselves at the White House to celebrate the confirmation of Ketanji Brown Jackson to the US Supreme Court, appeared on Martin’s show to discuss Pio’s remarks.  Chair Randall’s key points were as follows:

Superb job by Phyllis Randall; let’s make sure we all have her back!

P.S. Click on the image to watch the video. Chair Randall’s segment starts about 1 hour 20 minutes in… 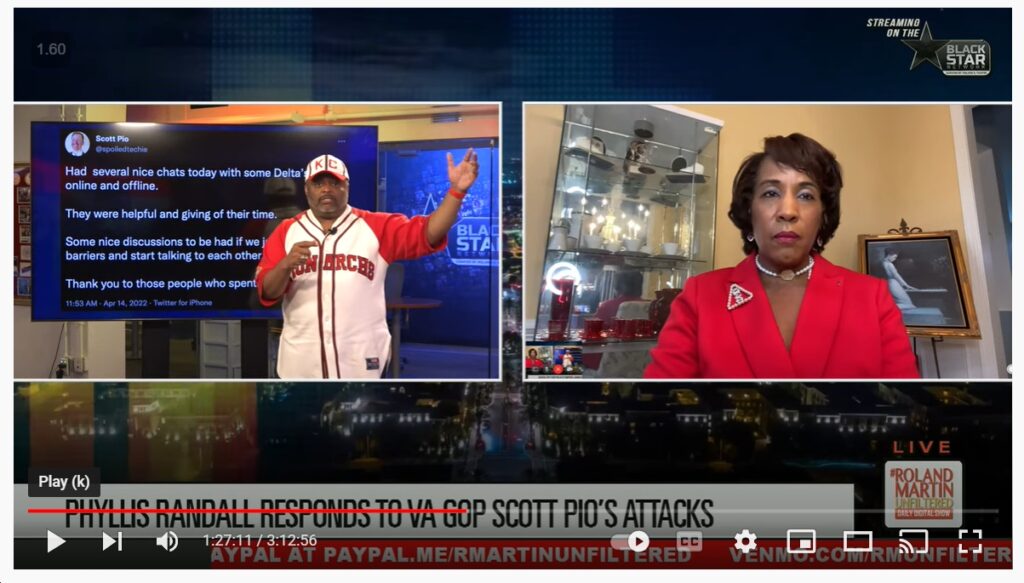