Since Hung Cao won the VA10 Republican nomination in Saturday, a lot of information has come out about Cao. For instance, it turns out that Cao holds a number of VERY extreme views, including:

On and on it goes. As the Democratic Party of Virginia pointed out, Cao “went as far as praising the Supreme Court’s pending decision to destroy decades of women’s rights, tweeting he was thrilled‘,” asking “How is it that bacteria on Mars is considered life, but a viable fetus is not?”  DPVA also noted:

One of his main supporters is former Trump Interior Secretary Ryan Zinke, who resigned in disgrace after misusing taxpayer dollars and abusing his position for personal gain. Cao is also endorsed by former White House physician Rep. Ronny Jackson, who was found to have engaged in “inappropriate conduct” during his time in the White House. The report alleges that Jackson had a pattern of abusive behavior towards staff, sexual harassment claims, and illegally prescribed medicines including opioids to staff. If these are the people Cao surrounds himself with, then Virginians have reason to be concerned.

Well now, as you can see below, Cao says it’s an “honor” to be endorsed by Sen. Tom Cotton (R-Arkansas). A few quick facts on Sen. Cotton really say it all about this one:

Also see here for information on Cotton’s “history of publicly denying climate change,” as well as his comments on COVID, “without regard to science or facts, and willing to use rumors surrounding a global crisis to attack his geo-political opponents.”

Bottom line: Cotton’s one of the most far-right members of Congress, and any endorsement by him should be interpreted accordingly. Needless to say, anyone endorsed by Cotton should not be elected to the U.S. House from a “purple” district like VA10, let alone to replace the excellent Rep. Jennifer Wexton (D)! 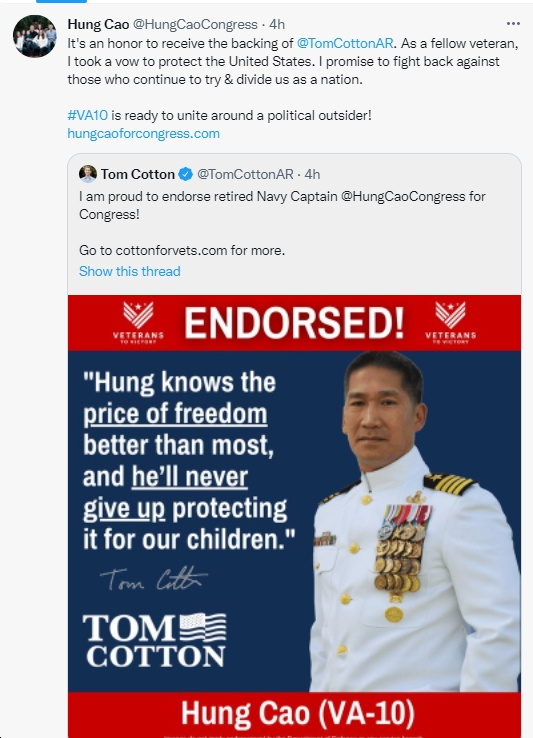