See below for statements by Virginia’s Democratic U.S. House members on tonight’s passage in the U.S. House of the “Protecting Our Kids Act,” which would “ban high capacity magazines”; “raise the age to buy military-style rifles to 21”; impose “federal law/penalties on straw purchasing, gun trafficking”; “promote safe storage”; “ban bump stocks and ghost guns.” Almost all Democrats voted FOR this legislation, of course, while almost all Republicans voted AGAINST it.  Yet again, the difference between the two parties couldn’t be greater. Vote accordingly! 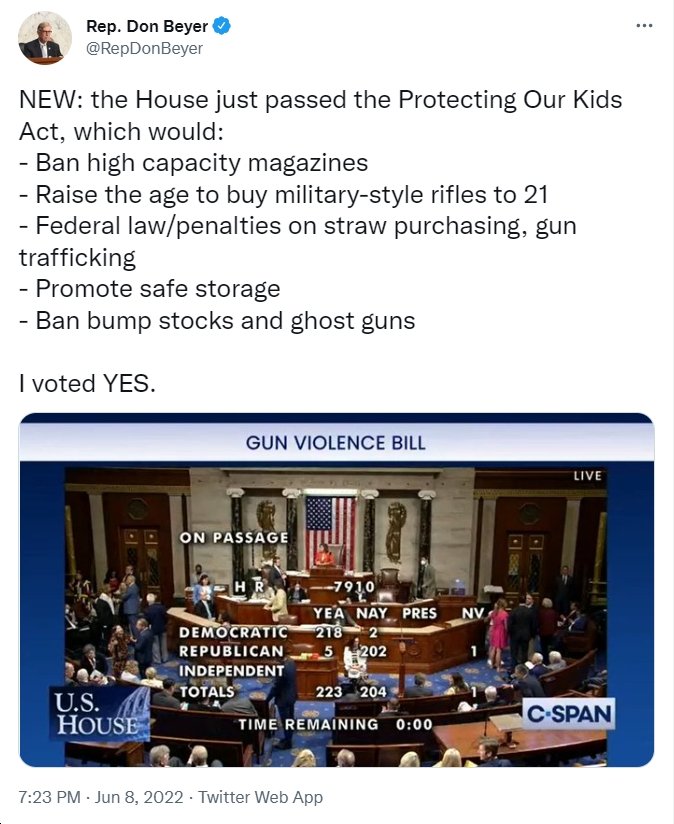 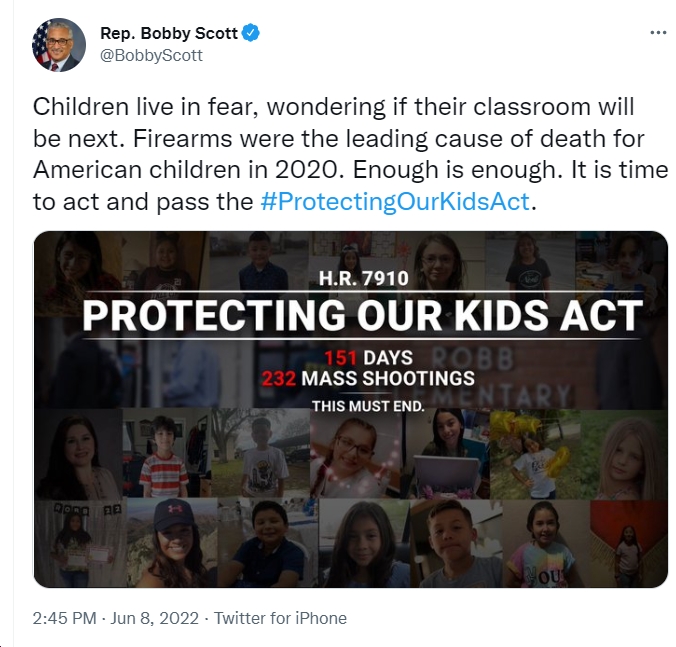 Tonight, I voted for the Protecting Our Kids Act, a bipartisan package of commonsense reforms to end gun violence, curb mass shootings, and keep communities in Coastal Virginia and across the country safe. https://t.co/8G1pFiRy4Y

As a mother, it’s horrifying that the leading cause of death for children in America is gun violence.

Tonight the House took action on a slate of common sense gun safety reforms to reduce mass shootings and make our communities safer for our children.https://t.co/ByzXPEoqMH

In the wake of the massacre at an elementary school in Uvalde, Texas last month, Spanberger has called for Congress to take long overdue steps to protect the lives of American citizens. The Protecting Our Kids Act — which passed in the U.S. House today — includes eight individual provisions to prevent mass shootings and combat gun violence in America, including raising the purchase age for assault-style weapons, improving safe firearms storage, and limiting access to large-capacity magazines.

“The American people expect action from their lawmakers — particularly as we grasp the horrors of the slaughter in Uvalde, the attack in a Buffalo supermarket, and dozens of mass shootings across the country in recent weeks. The provisions in this legislation are straightforward, and they make sense to Virginia’s gun owners and non-gun owners alike,” said Spanberger. “As someone who previously carried a gun for my job every day, I understand the responsibility that comes with carrying a firearm. The individual provisions in the Protecting Our Kids Act would demonstrate responsible steps towards keeping our communities safe. As the U.S. Senate continues its negotiations, I will continue to be a vocal supporter of commonsense gun violence prevention measures. In our district, we have seen the horrors of gun violence against Virginians — and I take these votes in honor of their stories.”

Since arriving in Congress, Spanberger has been a consistent voice for commonsense gun violence prevention legislation that can protect the lives of families, communities, and law enforcement.

In both 2021 and 2019, Spanberger voted to pass bipartisan gun safety legislation that would close existing federal background check loopholes and make sure individuals already prohibited from gun possession under federal law are unable to purchase firearms.

Spanberger has also voted twice to pass legislation to close the “Charleston Loophole,” which allowed Dylann Roof — a man prohibited by law from buying firearms — to purchase a gun before killing nine congregants at Emmanuel AME Church in Charleston, South Carolina in 2015. This legislation extends the background check length to 10 days, so that federal law enforcement have the time they need to complete necessary background checks.

Spanberger is a member of the Gun Violence Prevention Task Force, which was established in Congress after the mass shooting at Sandy Hook Elementary School in Newtown, Connecticut.