This morning, former Virginia House Speaker, Del. Eileen Filler-Corn, held a press conference with Jewish physicians and Rabbis to discuss “last week’s Supreme Court Decision overturning Roe v. Wade,” how it conflicts with Jewish law, and ” what this means for the Jewish community in Virginia and across the nation.” According to Del. Filler-Corn, the Supreme Court’s extreme decision overturning Roe v Wade:

“…was devastating news for millions of Americans and triggered laws in several states banning abortion. In Virginia, however, access to abortion remains legal thanks to the leadership of Eileen Filler-Corn and other Virginia Democrats. As the 56th Speaker of the House of Delegates, Eileen Filler-Corn led the effort to repeal Republican barriers to abortion access.

However, new efforts to ban abortion by Governor Glenn Youngkin and Republican legislators are not only dangerous for women, but are in direct conflict with Jewish law and infringe upon the religious liberty of many Virginians.”

Participants in the call, in addition to Del. Filler-Corn, were:

In her intro (see video below), Del. Filler-Corn said she’s “looking at this as an opportunity to educate the public on Hewish law and abortions.” She said “the decision by the Supreme Court last week overturning Roe v Wade was devastating,” although for now “abortion remains legal” in Virginia “as a result of Democratic leadership.” Del. Filler-Corn added that, “as the first woman, as the first person of Jewish faith to serve as speaker of the House of Delegates, I was proud to be a supporter of reproductive health care” and to “work to repeal the republican Republican restrictions on abortion access.” Today, “we find ourselves at a different point in time,” as “Governor Youngkin and his Republican allies are attempting to use the power of their offices to infringe upon the religious beliefs of Jewish Virginians, while also at the same time putting women’s lives at risk.” “Since he took office, the governor has supported incredibly dangerous legislation that bans abortion in the Commonwealth and just this past week he had said that he be he believes that life begins at conception and that he would quote gleefully sign any bill that came to his desk – this is of extreme concern.  We already know that the governor has a team of legislators working on legislation that is currently as we speak aimed at removing licenses from doctors. We saw Senator Travis Hackworth has already announced that he will file a bill that will be a total abortion ban is quickly as the next session. Obviously this is dangerous for women, but beside that it’s also in direct conflict with Jewish law…As the only Jewish woman currently serving in the General Assembly, I say we cannot have a discussion about respecting religious freedom without discussing laws that directly conflict with religious beliefs of so many Virginians” and are “infringements on not just our personal freedom, not just liberty, but also the free exercise of religion for Jewish Virginians.”

Dr. Imershein: “I can say unequivocally that restricting abortion at any gestational age is anti and contrary to thousands of years of Jewish law and also Islamic law.” She added, “the question is who gets to decide – the government or individuals – and in Judaism we believe in self determination; pregnant persons need to be given the same autonomy.” According to Dr. Imershein, “the question, ‘does life begin at conception’ is contrary to Jewish law,” and that until the baby is born, “the life of the mother always supersedes the life of the fetus or embryo.”

Rabbi Mandelberg said this is “an issue of critical importance to Jews.” She added that “our tradition teaches us that…a fetus is not a child and that our priority must be to consider the well-being of existing human beings – their health, their needs, their lives. That is why Judaism insists on protecting the lives of women and ensuring that they themselves make decisions that are right for their physical and mental health. Nowhere is this choice more important than when it comes to bringing a life into this world…That is why the Supreme Court’s reversal of Roe v Wade and the governor’s push to propose legislation to limit access to safe abortions countermands our Jewish faith tradition. Forcing a woman to bear a child when she may not have the emotional physical or personal resources to care for that child simply contravenes Jewish law and commonsense….What we are dealing with here is one group imposing their religious and political values upon others – a clear violation of the establishment clause that separates church from state. The Supreme Court decision and push for a 15-week ban on abortion here in Virginia is about stripping half the population of bodily autonomy.”

Rabbi Schwartzman said: “Last week’s Supreme Court decision conflicts directly with Jewish law which clearly permits the termination of a pregnancy in certain circumstances and always always prioritizes the health of the person giving birth. It is truly an outrage that women and others who can become pregnant are being stripped of their fundamental right to make essential health care decisions free of governmental interference. There is no question that abortion access is a vital component of reproductive health care. Even more critical to this conversation, pregnant individuals must be able to make ethical decisions based on their own beliefs and medical best interests without  government officials imposing their personal religious views on others…It is devastating to hear our Governor Youngkin has aligned himself with the court’s religious authoritarians in denying freedom of religion for not only the Jewish community but for all of those whose beliefs allow pregnant individuals their full rights. I’m sure you know that in addition to his clear commitment to the separation of church and state, Thomas Jefferson believed that our country must guarantee religious freedom for all…citizens from such diverse religious, ethnic, racial backgrounds…How shattered can you imagine [Thomas] Jefferson, who was also governor of this very state as well as our third president, would be to learn of the actions of Glenn Youngkin, actions that deny the very religious freedom Jefferson passionately enshrined through his life work… All of us must stand together to protect our rights. We do so as an expression of our understanding of our American values as well as from our deeply felt and legitimate religious moral beliefs.”

Ron Halber said the JCRC “condem[s] the U.S. Supreme Court’s decision that has ended constitutional protections for the right for an abortion that had been in place for nearly 50 years.” He added that this decision “will also likely create a situation where women of minority faith groups will be unable to fulfill their religious obligations.”

Guila Franklin Siegel said she speaks “on behalf of the nearly 150,000 Jews residing in Northern Virginia – Jews who overwhelmingly oppose the overturning of Roe v Wade.” She added: “We deeply respect other religious beliefs that life begins at conception. Judaism however has no such dictate. Even under its strictest most traditional interpretation, Jewish law mandates the termination of a pregnancy in certain circumstances involving the life or health of the mother. Compelling Jews to adhere to a law that elevates one religion’s tenants over and others is wrong, forcing Jewish pregnant individuals whose rabbis have advised them that Jewish law requires them to terminate their pregnancies to violate that religious directive is simply unacceptable.”

Del. Filler-Corn concluded: “The final line of defense standing between Virginia women and Governor Glenn Youngkin is a slim Democratic majority in the State Senate, and the only way that we can ensure that these basic liberties remain intact in the Commonwealth is to elect strong pro-choice candidates clearly in the next federal but also state elections – to ensure that we can expand our majority in the Senate and also flip the House. And as I stated at the beginning, I wanted this to be an  opportunity to bring together amazing, credible community leaders who could speak intelligently about and educate you all about Jewish law and abortion, and I think hopefully that that opportunity was presented here today.”

Also interesting, Rabbi Schwartzman referenced a lawsuit brought by a synagogue in Florida over abortion restrictions, calling it a “critical important test of true religious freedom,” adding, “I personally would commit to being involved in such a challenge” here in Virginia. Good! 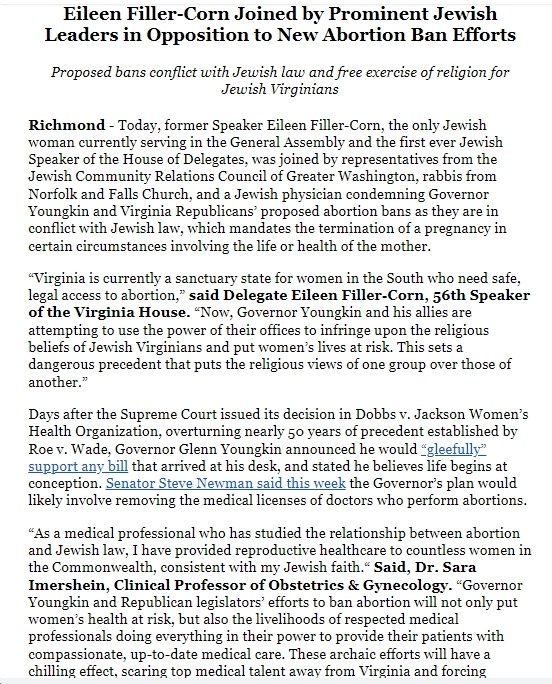 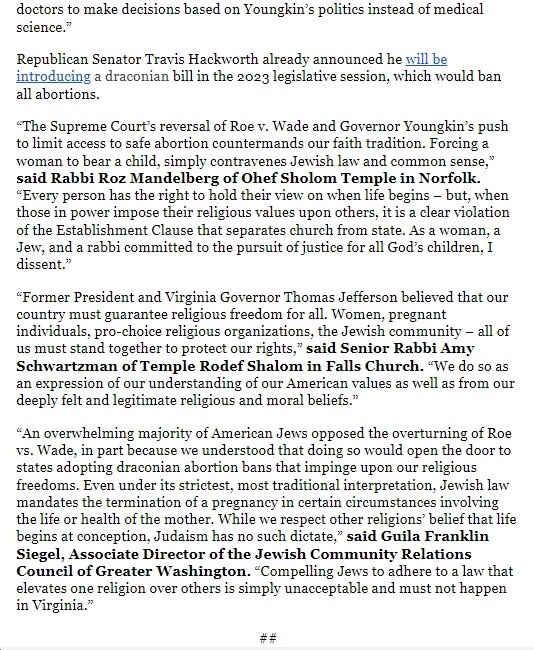