For whatever reason – gee, what could it be? what could it be? LOL – Glenn Youngkin, who’s only been in office as governor of Virginia for six months and has plenty to work on here (if he gave a rat’s hindquarters about Virginia), was busy delivering a speech this morning in…Nebraska?!? Yep, Nebraska, which just so happens to border on a certain state that traditionally holds the first presidential nominating caucuses every four years, with the 2024 cycle slated to really start gearing up next year, and with increasing talk about possible alternative Republican presidential candidates if Trump decides not to run, is in prison, etc.

One of those Republicans increasingly being mentioned is none other than Glenn Youngkin. For instance, see Reports: Presidential buzz surrounds Youngkin; GOP Gov. Glenn Youngkin expands political operation as 2024 speculation grows; and Political pioneer? Youngkin to deliver keynote speech to Nebraska Republicans, which reports:

Youngkin will deliver the keynote speech to the Nebraska Republican Party Convention, meeting July 8-9 in Kearney, Neb., a foray with potential political reverberations because of its proximity to adjacent Iowa, where the quadrennial political caucuses will help begin the next presidential election season in 2024.

So who knows if Youngkin is actually serious about running for president in 2024, but he’s increasingly acting like he’s at least thinking about it. For instance, check out the speech Youngkin delivered this morning in Nebraska (video below), to an audience of what appears to be middle-aged-or-older conservative white people (naturally!), who not surprisingly seemed enthusiastic to hear Youngkin spin a yarn about how he supposedly won the governorship, what he’s supposedly accomplished, how supposedly “Republican values are American values,” how supposedly a “red wave” is going to come crashing down on “Nancy Pelosi” this November, how we should all thank the lord for the (far-right) Supreme Court, blah blah blah. Of course, this being Glenn Youngkin, almost everything he said was either exaggeration, distortion or flat-out false. For instance, here are just a few of Youngkin’s bullsh*t and/or flat-out lies:

This could go on all day, given that almost every word Youngkin uttered in his speech this morning was either hyperbole, distorted, erroneous, flat-out false, cliched, moronic, and/or cringe-inducing. And, to use one of Youngkin’s verbal tics, “oh by the way,” how about the faux sincerity, the fake catch in his voice, etc? Vomit-inducing or what? Hey Glenn Youngkin, how about you just STAY in Nebraska and don’t come back to Virginia? LOL 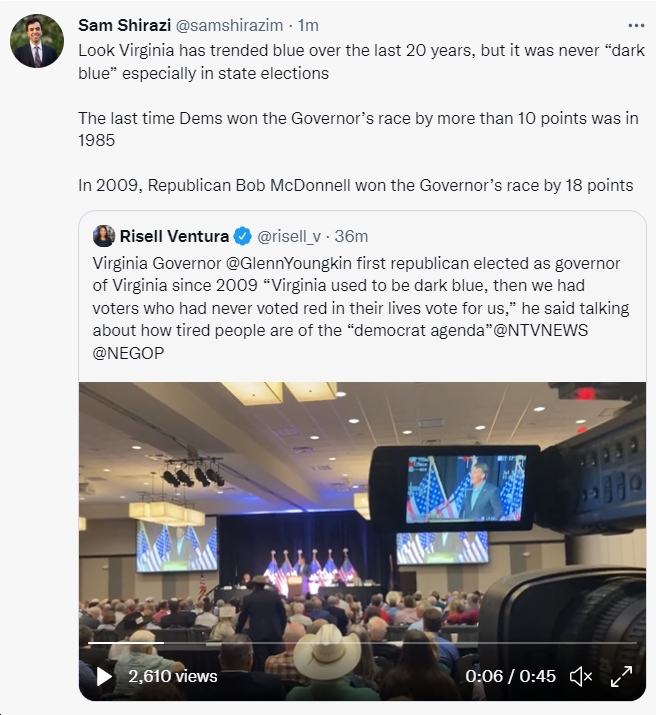