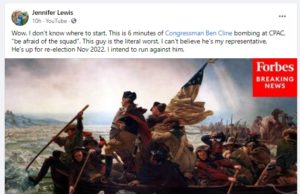 Conservatism in the Age of Trump (My latest challenge to the...

Is Rational Argument Worthless? (This week’s op/ed in red VA-06)

Newspapers Across the Country Stand Up for Freedom of the Press;...

lowkell - August 16, 2018 5
Today, Almost 350 news outlets to publish editorials denouncing Trump's 'dirty war' on press. Trump has stepped up his attacks on the media in recent...

“But everyone else is doing it!” Said the Man Holding Thomas...

Kellen Squire - October 19, 2017 0
by Kellen Squire While I'm out on the campaign trail, I frequently remind voters that while my opponent, Delegate Rob Bell, and I have differing...

Owning The Declaration of Independence

Blue Virginia - July 4, 2017 1
by Schuyler VanValkenburg, House of Delegates Candidate, VA-72, and Sam Ulmschneider In November 1863 at Gettysburg, President Lincoln called back to a document written in July fourscore...

Tom McLaughlin - April 20, 2017 1
By Tom McLaughlin; cross posted from SoVaNow.com  Loyal readers will remember that back in the day when Robert Hurt was our congressman — not that...

Why is right wing crackpot Ken Cuccinelli running for Virginia governor?  Well of course because he is the spiritual descendant of Thomas Jefferson:

I am running for Governor of our Commonwealth to advance the same First Principles [...] best articulated by Thomas Jefferson in that most famous sentence of the Declaration of Independence: "We hold these truths to be self evident, that all men are created equal, that they are endowed by their Creator with certain unalienable Rights, among these are Life, Liberty and the pursuit of Happiness."

No, that wasn't another Virginia earthquake you just heard -- that was old Tom doing flips in his grave. Because it is hard to think of a politician in this country who so thoroughly repudiates the democratic, egalitarian, academic, rational spirit with which Jefferson endowed the American republic -- on all the issues that matter, including:

- "All men are created equal":  Our Ayatollah General actually has the cojones to quote Martin Luther King in calling Jefferson's famous line above "our national creed."  Well of course it is, but to what was King referring?  To the inalienable right of coal company owners to avoid environmental and safety regulations if they give you big enough campaign contributions?  Hardly.

Thomas Jefferson Changes Us From “Subjects” to “Citizens”

The Library of Congress explains:

Recent hyperspectral imaging of Thomas Jefferson's rough draft of the Declaration of Independence has clearly confirmed past speculation that Jefferson made an interesting word correction during his writing of the document, according to scientists in the Library of Congress' Preservation Research and Testing Division (PRTD).

Jefferson originally had written the phrase "our fellow subjects." But he apparently changed his mind. Heavily scrawled over the word "subjects" was an alternative, the word "citizens."

The correction seems to illuminate an important moment for Jefferson and for a nation on the eve of breaking from monarchical rule: a moment when he reconsidered his choice of words and articulated the recognition that the people of the fledgling United States of America were no longer subjects of any nation, but citizens of an emerging democracy.

Very cool, I wonder what "hyperspectral imaging" analysis would find if applied to other great documents from our history.

Jefferson insisted in the last year of his life that the university would be "now qualified to raise its youth to an order of science unequalled in any other state; and this superiority will be greater than the free range of mind encouraged there, and the restraint imposed at other seminaries by the shackles of a domineering hierarchy and a bigoted adhesion to ancient habits."
- Willard Sterne Randall, Jefferson: A Life

Thomas Jefferson must be doing a Triple Lutz in his grave right now.  The author of the Declaration of Independence spent the last decade of his life focused on a project that serves as a fitting epilogue to all that he had contributed to the world.  If American democracy may be viewed as a vessel to channel the power of free thinking people to actively shape and improve society, the University of Virginia was Jefferson's experiment in how to train people to become precisely the kind of citizens that democracy requires.

Just as one day Adolph Hitler would epitomize the opposite of free society through the hideous invention of the concentration camp, Jefferson capped off a lifetime of molding the concept of democracy by designing its model institution and incubator, the public university.  So the University of Virginia is more than just one of the world's great centers of learning, more than the campus that the American Institute of Architects proclaimed in 1976 as "the proudest achievement of American architecture in the past 200 years."  It is also a symbol of the freedom of thought, of democracy - and of the great man who planted those seeds in Virginia soil almost 200 years ago.

This is the institution now under attack by Attorney General Ken Cuccinelli.