Why You Should Vote for Don Beyer

What you want in your Congressman is someone who cares about you and the country, is a leader on the Hill and in the community, is knowledgeable, and is open to innovative ideas. We are fortunate to have all of that and more in our Congressman, Don Beyer. As your Delegate, I want to give you the rationale for my support of Congressman Beyer by detailing just a few of the most influential accomplishments that Don has made while serving in the US Congress and to ask you to re-elect him in the upcoming November 8th election. 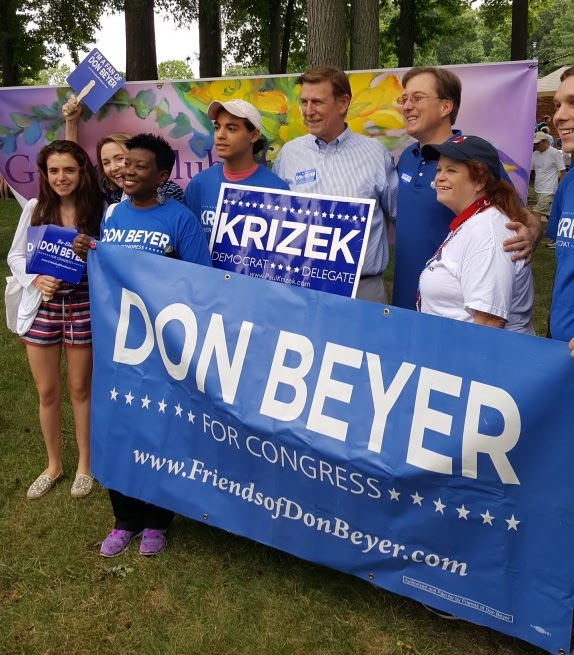 In the House of Representatives these past eight years, Congressman Beyer has led every major climate change effort. He authored seven distinct pieces of the recent Inflation Reduction Act, including tax credits for electric commercial trucks and vans, and the first-ever tax credit for taking existing carbon out of the atmosphere. Don founded the Congressional Fusion Caucus, and he has been leading bipartisan efforts to bring fusion energy to humankind in the next ten years, rather than the next thirty. Fusion energy is clean energy from seawater with no radioactive waste, what Don calls “the Holy Grail for cooling our planet”.
Don chairs the Space committee. As a result, we recently successfully smashed a rocket into a small asteroid moon named Dimorphos to learn how to change the course of any future asteroid heading for impact with Earth. It is important to avoid what happened to the dinosaurs 66 million years ago when an asteroid slammed into Mexico’s Yucatan! Hopes of going back to the Moon with Artemis were set back by the arrival of Hurricane Ian, but the launch date is on schedule for November. This will be our first trip to the Moon and back in 50 years!
Lastly, in terms of leadership positions, Don chairs the Joint Economic Committee, working to overcome persistent inequities in wealth and income.
The Don Beyer we all know relishes every opportunity to help his constituents here in the 8th district. A few examples include the successful legislation he and Republican Congressman Rob Wittman sponsored to allow the new railroad Long Bridge over the Potomac. Don also secured an earmark to complete road striping on the Parkway and sewer grate replacements. Don’s office was also proud to host the recent forum that I attended on improving safety at the Belle Haven and Belle View intersections. He expects to hear something from the Parkway by month’s end outlining the plan to rework the intersection.
Another issue that many of us are concerned about is the awful noise in the sky from low-flying jets and helicopters. Due to Don’s efforts this summer, Congress rolled out the first-ever online site to report helicopter noise, so that we can identify the abusers. In a meeting with the FAA’s regional director this year, he expressed his strong support for a pending proposal that would move the planes further down the river before making their turns. He is awaiting the FAA’s response to the proposal.
Additionally, Don sponsored the legislation that gave states and counties the ability to deal with predatory towing companies. And, in the last two years, he has secured 25 earmarks, for everything from storm sewer flood control in Alexandria, to a behavioral crisis mobile unit in Arlington, to electric school buses in Falls Church. But, his most meaningful work is completing over 13,000 constituent service cases – everything from emergency passports, to finding hospital beds, to securing more than $10 million in refunds from the IRS and other federal agencies, to securing the release of Americans held in an Egyptian prison, to nominating 233 awesome Northern Virginia young women and men to West Point, Annapolis, and Colorado Springs.
I understand that Don’s office’s casework is at an all-time high with constituents, including many in Mount Vernon, who need help navigating federal agencies. He would be the first to tell you to reach out to his office for help with the IRS, Social Security, passports, and the Postal Service.
There is so much more your vote for Don means. With Don and the Democrats in power, this has been the most productive Congress since the 1960s. The largest infrastructure act in a generation. The Chips and Science Act will invest $52 billion in the semiconductor industry and double our nation’s investment in basic research. The Inflation Reduction Act is actually the largest environmental bill in human history. The American Rescue Plan proved to us that we can lift most American children out of poverty with the Child Tax Credit. The real net worth of the bottom income half of American families has risen 60% in the last 20 months, to almost $68,000.As most know, Don has cheerfully dedicated most of his adult life to public service – putting people over politics, leading his colleagues with innovative thinking and a love of science and technology. Most importantly, Don Beyer works hard for us. I hope you will join me in supporting Don Beyer’s re-election to Congress.
********************************************************