But it helps when the team is being coached by a true leader who knows how to win.

In the case of Abby, as her constituents often know her, she had to introduce herself to new voters constituting 75 percent of the newly redrawn 7th CD. This is the largest percentage of new voters in all of Virginia’s 11 CDs after redistricting.

Abby’s proven success at building consensus among many seemingly different residents and communities as well as her ability to craft pragmatic legislation again put her on a winning path. In fact, she ranks as the 5th most bipartisan member of the U.S. House.

The results were astonishing. Rural Caroline County voted 44 percent for Spanberger, In addition, several other rural counties also hit or nearly achieved 40 percent vote totals for Abby. No modern Democrat is supposed to come close to winning 40 percent of the vote in rural areas and small towns. This comes from the teamwork and selflessness of everyone involved, motivated and inspired by the problem-solving policies of the incumbent.

In fact, Abby’s 52.2 winning percentage is the highest she has received in three campaigns for VA’s 7th, the first tally that has exceeded a full 52 percent.

These efforts dovetailed with the suburban Providence District of Fairfax County – both to help in nearby rural jurisdictions and to foster a dialogue to understand the intersection of needs and views between other jurisdictions and our own.

A rural-suburban working group of Democratic committees formed for regular conversation and dialogue through Zoom, including leaders of a number of the rural Democratic committees in the new 7th such as Orange, Culpeper, Madison, and Greene Counties as well as suburban Stafford County. This partnership formed with the Statewide Affairs arm of the Providence District Democratic Committee (PDDC) of suburban Fairfax County in Northern VA (NoVA).

These virtual conversations discussed everything from the main issues of this election season to the challenges of fielding volunteers for canvassing or other needed help in various locales, as well as persuading folks in deep blue suburban areas in NoVA to climb into their vehicles and travel through country landscapes to help Abby prevail in November. Congresswoman Spanberger headlined one such discussion, an 18 May public forum hosted virtually by Providence Democrats with each of the other Democratic committees listed as full partners.

Direct conversation between rural and suburban Democratic committees fostered increased levels of awareness, not to mention trust, between the Rest of Virginia (RoVA) and NoVA. Providence Democrats also hosted a Volunteer Mobilization Fair on 18 September, in which each of the mentioned rural Democratic committees sent virtual participants by Zoom, except for Greene County whose Chair Sara Ratcliffe drove up to Providence to present in-person to the applause of those in attendance. This Mobilization Fair also had virtual participation from Team Spanberger, by way of Audrey Kranc, who capably served as Field Organizer in ruby-red Caroline and King George Counties. Providence’s Volunteer Mobilization Fair yielded in-person canvassers, phone bankers, and even a lawyer for voter protection efforts.

Being no stranger to door to door canvassing, I took to the road nearly every Saturday this year to help Abby. Having grown up on several acres in the small town of Mars, PA, I continue to feel both a desire to help in small towns and a comfort level talking with Virginians far away from the bright lights and big cities.

Piling the miles on my Jeep Liberty became a favorite pastime again this year – Orange, Culpeper, Spotsy… no problem. Madison, Stafford, Prince William, and the City of Fredericksburg… keep on driving. King George and Caroline, where the driveways often put on more miles than the roads and many residents do not often see a Democrat in real life. In all, I met voters in eight of the 10 Counties and City of Fredericksburg in the new 7th, having conversations or dropping lit at over 1,400 homes total.

Having stopped by and knocked on the doors of 366 homes in Caroline County – the most rural and Republican of all the counties in the new 7th – I found a welcoming population curious to hear more about this Congresswoman they often know as Abby, whom they have read about in their local newspaper or heard about when traveling to a neighboring county.

The rural Democratic committees of the Piedmont Region, including Orange, Culpeper, Madison, and Greene, all organized like there would be no tomorrow. Folks chipped in with volunteerism when and where they could in the further-out areas of King George and Caroline Counties. It is through several years worth of organizing experience and expertise in these rural counties that Abby achieved the previously-unattained 40 percent of voters in small towns and rural areas. All of this activity led to proving that the path to winning starts with losing less badly, with respect to Democrats across the country in rural areas.

But the efforts of all the Democratic committees were also bolstered by a dream team of campaign staff rivaling the dream team from 2018, who in both 2018 and 2022 set high goals for themselves and volunteers alike. The efforts in the rural areas were punctuated by almost flipping outer suburban Stafford County and running up the score in the suburban areas of eastern Prince William County, thus securing the win.

And the campaign efforts of staff and volunteers alike could not be achieved with the other three parts of any congressional office – a finance team second to none in one of the most expensive U.S. House races in history, a district office team that not only knows the district but actually shows up and is present in the district, as well as a legislative team that pieces together practical pieces of bipartisan legislation that helps Virginians solve real problems.

The coming together of RoVA and NoVA through combined volunteerism in this year’s midterms may also prove another point: Congresswoman Abigail Spanberger has appeal across the geographies and regions in the Commonwealth of Virginia.

Below are a few photos taken throughout the 2022 midterms campaign trail while knocking on doors and volunteering in other ways to reelect Congresswoman Abigail Spanberger. 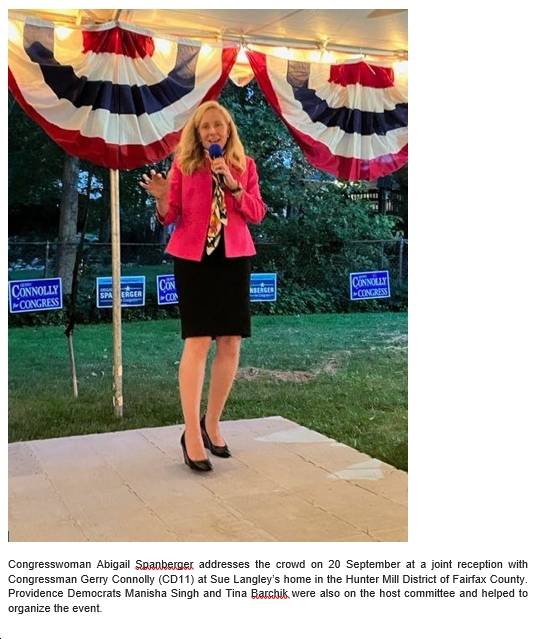 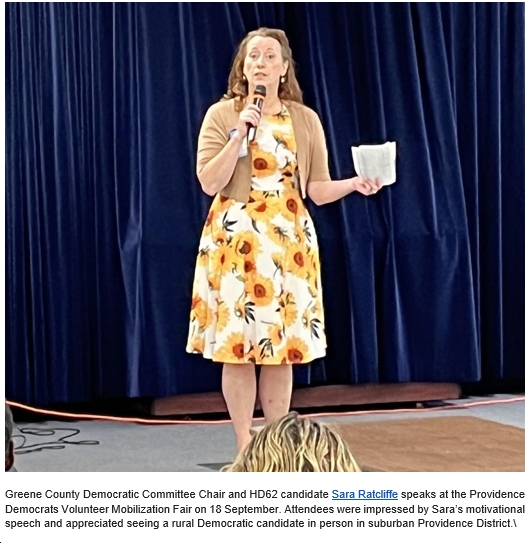 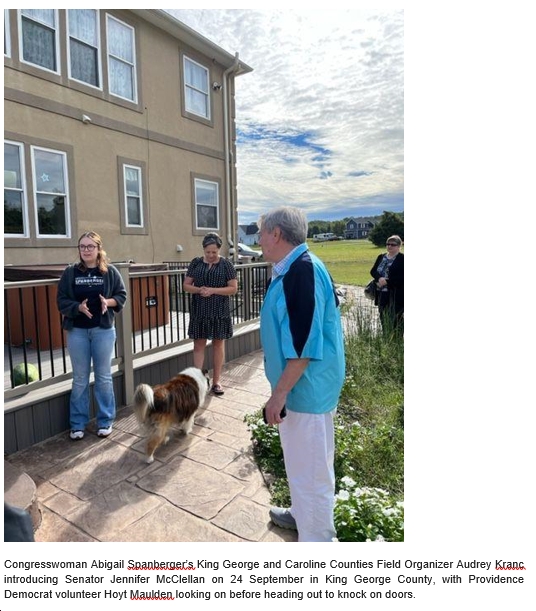 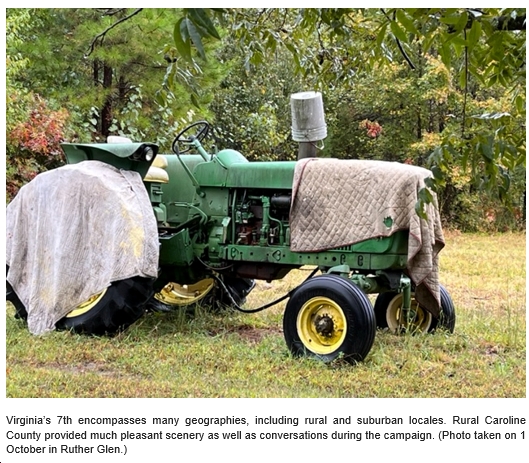 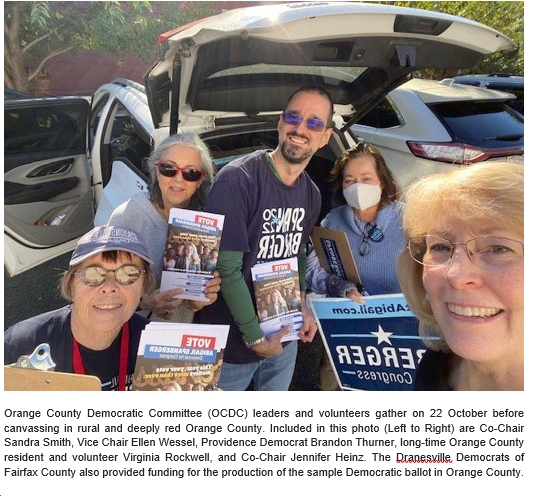 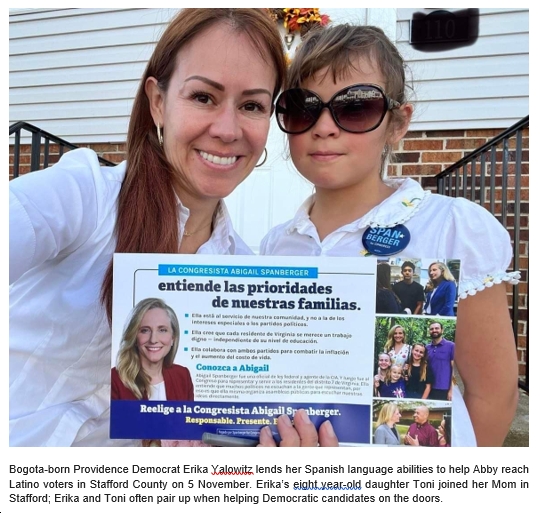