And with that, VA02 is going to see a MASSIVE downgrade in its representation in the US House. 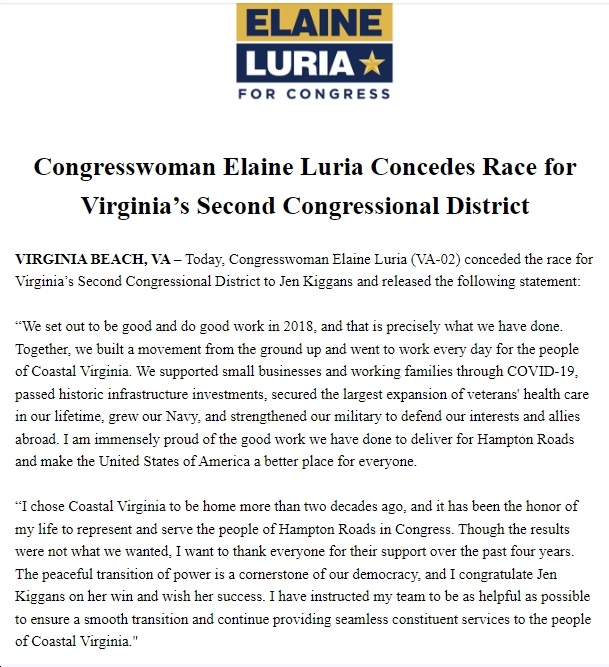 UPDATE 8:59 pm: Per Ben “Not Larry Sabato” Tribbett – “Spanberger has no way with the math to lead until Prince William County early vote comes in so we are just waiting on that. I think she’s in a much stronger position then Vega at this point but can’t call without seeing at least some of that.”

UPDATE 8:54 pm: Per Ben “Not Larry Sabato” Tribbett – “Only locality with early votes in for VA2 is Suffolk. Luria winning eday by 2 points, early vote by 29 points and mail by 52 points. Virginia Beach has Kiggans by 12 so far on eday with No early vote in. This one will tighten up for sure.”

UPDATE 8:51 pm: With 88.6% of E-Day precincts and 66.3% of early votes reporting, Republican Yesli Vega’s lead over Rep. Abigail Spanberger (D-VA07) is now down to 7,385 votes. There are about 30k early votes, which should skew strongly “blue,” outstanding, plus 18 precincts in “blue”-leaning Prince William County.

UPDATE 8:36 pm: With 86.5% of Election Day precincts and 39.8% of early votes reporting, it’s now Republican Yesli Vega by 11,499 votes (52.9%-46.9%) over Rep. Abigail Spanberger (D-VA07). About 49k early votes, which should skew strongly “blue,” are outstanding, plus 18 precincts in Prince William County, which also should help Spanberger. As Ben “Not Larry Sabato” Tribbett tweets, “Too early to call but with what is outstanding I would much rather be Abigail Spanberger than Yesli Vega.”

UPDATE 8:21 pm: Per Sam Shirazi, this is good news for Rep. Abigail Spanberger (D-VA07) – “Spanberger wins Orange early in-person and blows out mail ballot Vega did well on Election Day, but Spanberger crushed it in the early vote. Orange County is done except Provisionals in VA-7 Biden got 38.5% in 2020 Spanberger got 39.5% tonight”

UPDATE 8:13 pm: Per Sam Shirazi, “Most of Stafford Election Day is in Vega up 5 BUT Spanbeger wins Stafford in-person early vote 58-42 AND Does not include mail ballots” and “Yes can confirm all that is left is Provisionals in Culpeper in VA-7 Spanberger almost matches Biden Remember Biden won district overall by +7 Rural margins matter”

UPDATE 8:11 pm: With 55.9% of Election Day precincts and 49.8% of early votes counted in VA10, Rep. Jennifer Wexton (D) leads Republican Hung Cao 52.2%-47.8%. As Sam Shirazi tweets, “Wexton up in Loudoun with about half of Election Day in VA-10 And that’s only with in-person early vote Not counting mail Looking good for her”

UPDATE 8:00 pm: In VA07, with 68.4% of Election Day precincts and just 6.7% of early votes reporting, it’s now Yesli Vega (R) 56.3%-Rep. Abigail Spanberger (D) 43.5%. So…we’ll see how Prince William County does for Spanberger, but I’m concerned because it didn’t look like big turnout there, at least not on election day. Stay tuned…

UPDATE 7:56 pm – Per Ben “Not Larry Sabato” Tribbett, “Bob Good (R) has been re-elected in Virginia’s 5th District. Only districts left to call are 2nd, 7th and 10th…” Also, “7th is all about PWC turnout”; “2nd only has election day vote from the Beach in. Need early data.”; “10th has some election day upside for Wexton to come in, plus early (good for her) while Cao has got in a bunch of good stuff for him”; “Early vote in Loudoun goes Wexton by 8000- this will be her single best “precinct” reporting tonight- also tells us this will be more like 2020 in big biases between methods of voting.”

UPDATE 7:44 pm – With 16 of 57 precincts reporting in Arlington, it looks like County Board member Matt de Ferranti is cruising towards reelection with 59.8% of the vote, with independent Audrey Clement in second place at 28.9%. And for School Board, Democratic-endorsed Bethany Sutton leads 65.5%-32.6% over James Rives IV.

UPDATE 7:33 pm – Per Ben “Not Larry Sabato” Tribbett, “1/4 of the election day vote in for Loudoun County and Jennifer Wexton and Hung Cao are running almost even. If this holds, it will be Loudoun early votes vs. the rurals to determine this one.” Also, he’s called VA04 for Rep. Donald McEachin (D).

UPDATE 7:15 pm – Some early results coming in from very “red” areas of VA07 (Orange  County and Culpeper County) and VA10 (Fauquier County), and not surprisingly Reps. Spanberger and Wexton are trailing. The issue’s going to be margins. Also note that in  both VA07 and VA10, the results so far appear to be election day precincts (which lean Republican), not early votes (which lean Democratic).

As always, I’ll be live blogging Virginia’s election results as they come in tonight (polls close at 7 pm – make sure you stay in line and cast your ballot!), with results from the State Board of Elections, VPAP, etc. I’ll also be keeping an eye on Twitter feeds from political gurus like Not Larry Sabato (Ben Tribbett), Dave Wasserman, etc. [Note: check out the Election Day Open Thread, particularly the comments section, for tons of information from today…]

The main races I’ll be focusing on are:

Heading into election day, the consensus seems to be that Democrats will win VA10, with Democrats favored in VA07 and with VA02 a tossup. Also, per Dave Wasserman, if Rep. Luria wins VA02 (and if both Reps. Spanberger and Wexton win), it’s almost certainly going to be a good night for Democrats. We’ll know soon enough.

Finally, here are a few numbers to keep in mind as results start coming in tonight:

Also, see below for information, from Sen. Scott Surovell, about how votes will be reported tonight.

It will be important to keep this order in mind as results are reported on Tuesday night. Also, keep in mind that the early vote skews Democratic and that Election Day itself will be “redder” than the early votes. https://t.co/yZ884f6aOE h/t @ssurovell pic.twitter.com/LhSczJbOR8

Apparently vote reporting order is NOT going to be uniform, but all votes will be reported by precinct & sorted by E-Day/Early In Person/Early By Mail – diff jurisdictions will report these in diff orders depending when they’re done + early vote should be in sooner than prior yrs

"Today, we learned that inflation moderated and incomes grew in October, following yesterday’s news that our economy grew at an even stronger pace from July to September than we previously thought." - @POTUS https://bluevirginia.us/2022/12/thursday-news-banana-peels-for-xi-jinping-kevin-mccarthy-is-caught-in-trumps-vicious-cycle-teachers-rail-against-virginia-gov-youngkins-proposed-curriculum-updates-m#comment-6054625307

40 Groups Call on Forest Service, BLM Not to Rush Enviro Reviews on MVP (@KarennaGore: "government should not hand over public land to private interests who damage it -- all for the sake of a project that...does not benefit the public") https://bluevirginia.us/2022/12/40-groups-call-on-forest-service-blm-not-to-rush-enviro-reviews-on-mountain-valley-pipeline h/t @Wild_Virginia