Representative Abigail Spanberger’s win in the newly drawn 7th Congressional District (CD) this November can be attributed to a great number of factors, not the least of which is the strength of the candidate herself. The influence of the voters and volunteers of Prince William County on the results of this election cannot be overstated, however. Simply stated, without the strong support of Prince William County voters – all of whom were new constituents of the 7th CD – Rep. Spanberger would not have won reelection.

As can be seen above, the registered voters of Prince William County alone make up nearly a third of those in the VA 7th. Prince William County is the largest single jurisdiction in the district, with more voters than Culpepper, Caroline, Greene, King George, Madison, Orange Counties, and the City of Fredericksburg combined. The number of potential voters is only the beginning, though; this year it was also necessary to get those registered voters to vote in an election year with nothing else on the ballot, and for a Democratic candidate relatively unknown to most of the electorate. We achieved both of these goals admirably.

Virginia voters have had more choices in how to cast their ballots in recent years. In this election, about a third of voters across the 7th CD, and in Prince William County, chose to vote by absentee ballot or early in-person. Given the large number of votes involved in Prince William, examination of this portion of the election results is warranted. In Prince William County, Rep. Spanberger won 65% of the vote cast on Election Day itself. Nearly a quarter of people who voted Democratic chose to vote early in-person, with Rep. Spanberger winning 73% of those votes. For those that chose to vote by absentee ballot, 80% chose Rep. Spanberger. The number of Democratic voters who chose to cast their votes before Election Day is truly astounding. 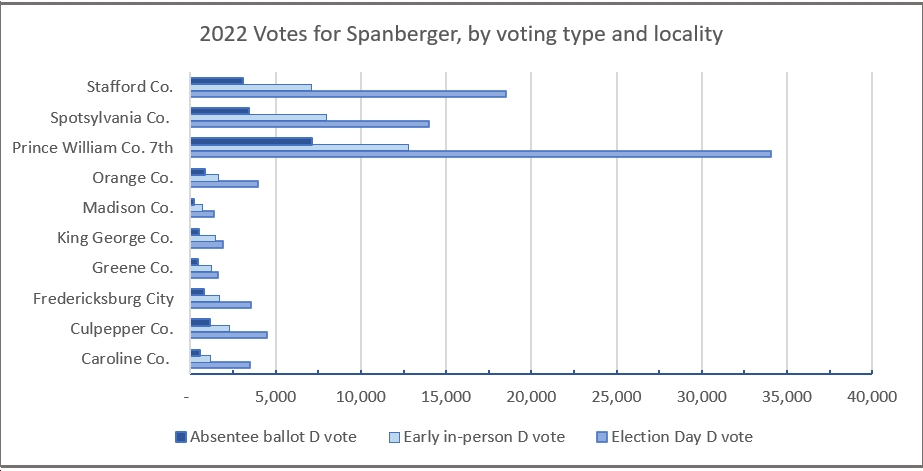 Volunteers for Democrats in Prince William County have been cultivating their presence at early voting locations for many years, and our efforts have paid off. The opportunities that early in-person voting provides are numerous. The appearance of partisan political signs at early voting locations, which only appear when early voting is open, increases awareness of people driving by, both of the election and also of the opportunity to vote when it’s most convenient for them. At places where there are a significant number of customers passing by early voting locations for other purposes, such as at the Woodbridge Department of Motor Vehicles (DMV) in Prince William, many people take advantage of the “two-for” opportunity. Once reminded, we hear many people comment that they might as well vote since they are already here for another purpose. 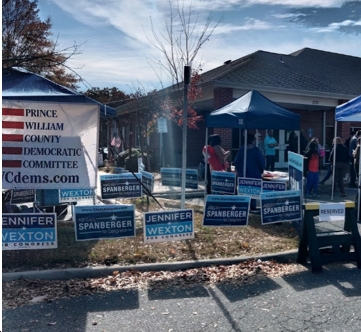 Perhaps most importantly, the presence of passers-by allows our volunteers an opportunity to provide more specific election information to citizens. The number and range of questions our volunteers field on an average day can be huge. Even for residents who are politically aware, there is a paucity of local news reporting and consumption that makes it difficult to keep up with the specific changes related to redistricting, registration (particularly following a move or change in citizenship status), and what is necessary to bring in order to vote.

In addition, we are often approached by persons with disabilities or their advocates with questions regarding allowable accommodations. While these rules have remained largely stable (with the notable exception of the availability of drive through voting during the COVID emergency), the population of people needing or wanting accommodation is constantly evolving and growing.

There are good reasons to believe that early voting locations such as the DMV in Woodbridge are more likely to attract people who have in-depth questions or hesitancy about registration or voting generally. There are significant differences in the demographics of Prince William County’s portions of the 7th CD compared with the rest of the district. The American Community Survey shows that Prince William County residents are much more likely to identify as persons of color, to have been born in a place other than Virginia, and to speak a language other than English at home. Prince William and Stafford Counties, and the City of Fredericksburg, have the highest populations of youth in their teens and twenties – who are also likely to visit the DMV for obvious reasons. I have personally spoken with many of these citizens, many of whom have just attained U.S. citizenship, who just want to get a better understanding of what registering to vote means, when they need to re-register, or of what the voting process is. Some new voters have real fears about voting – they ask if someone will watch them, or force them to vote in a certain way. Simply reassuring these voters and speaking with them has a big impact.

I would argue that these are conversations that are less likely to occur at precincts on Election Day itself, where people only tend to show up if they are ready to cast a ballot. Unlike other opportunities for voter education and outreach, such as at doors, events, or over the phone, our presence at early voting locations allows citizens to immediately follow through with their new information and resolve to cast a ballot. It is difficult or impossible to say how many of these people would’ve voted on Election Day; however, given that most of them voted Democratic, the benefits are indisputable. Further study after this year’s results are finalized would be valuable, particularly regarding provisional voters who registered after the initial period of registration had closed. The information currently reported by the provisional vote category does not yet provide enough information to allow for further examination of how the change in registration will affect voting.

There are some within our own party who believe that there is little point to our presence or to offering Democratic sample ballots at voting locations on Election Day or early voting, particularly during the federal cycles when candidates are well publicized and feature a “D” or “R” after their name.  This view overlooks what research has clearly demonstrated about human behavior more broadly. People are social animals. We respond positively to positivity – there is a reason why Walmart pays a person to greet shoppers at the entrance to their stores. A simple sincere smile before, a thank you after, and a casual offer to help goes a long way to making voting a positive experience for voters, who are then more likely to repeat the behavior. Likewise, we actively celebrate new voters and provide encouragement to come back; studies show that once a person has voted in two consecutive elections, they are more likely to become life-long voters.

Most people also want to feel that they are part of a group, and some Democrats live in families, neighborhoods or larger communities that make them feel isolated or alone in their views. Our presence lets them know that that is not the case. Personal relationships are formed when you see the same person day after day or year after year – even if you don’t know the person’s name. Studies have demonstrated that these “loose” social ties are more influential on some behaviors, such as voting, than very close social ties. This is why making a plan to vote with a person who can’t cast a ballot in that moment or saying the words “I will see you next year!” matters.

Finally, for people who volunteer for political purposes regularly, it’s easy to overlook things that may seem obvious to us – which door to go in, who should they take a particular question or problem to, what do those letters after the candidate’s names indicate, and (this year) is there really just one office on the ballot? Casually offering this information in a friendly way also makes the voting experience more likely to be positive.

Prince William County Democrats and supporters in the 7th CD are thrilled with our new (for us) representation in the U.S. House of Representatives. We look forward to working closely with Rep. Spanberger on present and future challenges, and the many victories that are yet to come.