The Republican Party having a “normal one” this morning, huh? Seriously, though, who in their right mind would vote for any of these extremists, “Big Lie” promoters, racists, nutjobs, etc?

First off, check out Trump’s racist, bizarre post, in which he writes about “Young Kin” (seriously, that’s how Trump spelled it) and then, vicious racist that he is, says “Sounds Chinese, doesn’t it?”  Sick shit. Also, the thought that racist nutjob, criminal, etc. Donald Trump was ever president of our country is beyond horrifying. As is the thought that Glenn Youngkin actually said, “President Trump represents SO MUCH of why I’m running”  – and proudly accepted the endorsement of a guy who TRIED TO OVERTHROW OUR DEMOCRACY! Just think about that. 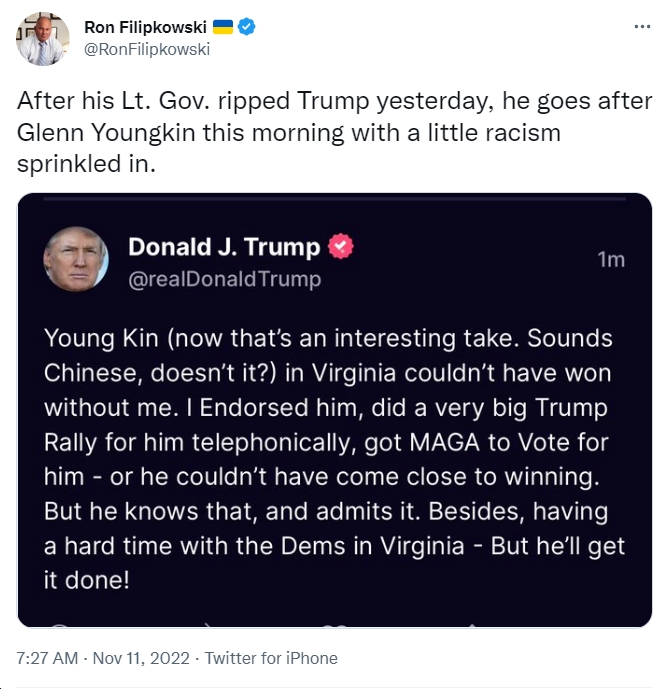 Next, check out the audio of VA Sen. Amanda Chase (R) on far-right talk radio (WRVA) this morning, where she said in response to Del. Tim Anderson (R)’s comments yesterday about her and about Trump:

“You shouldn’t go after a fellow Republican…I know Tim [Anderson’s] heart, I know he meant well, but what he said was disappointing, hurtful, divisive and quite honestly odd. Now, I do know…he’s eyeing [Jen Kiggans’ Senate seat]…and I know Tommy Norment…telling Tim Anderson you’re going to have to denounce Amanda Chase if you’re going to get support for Jen Kiggans’ seat.”

What did Anderson say to trigger this? The following: