See below for Democrats’ condemnation – and Republicans’ silence – of a tweet by the Virginia GOP, using anti-Semitic tropes to attack VA House Democratic Leader Del. Don Scott for receiving a $25,000 contribution from billionaire, progressive donor and Holocaust survivor George Soros. Note that Soros is a citizen of the United States as well as of Hungary, and is a frequent target for attacks by Hungarian Prime Minister Viktor Orbán, and:

His extensive funding of political causes has made him a “bugaboo of European nationalists“.[25] The New York Times reported in October 2018 that “conspiracy theories about him have gone mainstream, to nearly every corner of the Republican Party“.[26] Numerous American conservatives have promoted false claims that characterize Soros as a singularly dangerous “puppet master” behind many alleged global plots.[26][27][28][29] Conspiracy theories targeting Soros, who is of Jewish descent, have often been described as antisemitic.[30][31][32]

So now, the VA GOP has claimed that Soros is a “foreign ultra left-wing billionaire” who supposedly has “bought radical prosecutors in VA” and supposedly is now “trying to buy Democrat [sic] leadership in Richmond too.”

In response, Virginia House Democratic leader Don Scott tweeted simply, “Delete this antisemitic filth.” And Rep. Elaine Luria (D-VA02), who is Jewish, tweeted, “The GOP continues to use antisemitic signaling language to its base just like their leader Donald Trump. Jews who are American citizens are not foreign. Call it out. Reject it.” Del. Schuyler VanValkenburg tweeted, “To call a Jewish-American a foreigner is to use one of the oldest – and most vile – antisemitic tropes. A slander used to persecute Jews throughout world history.” And SEIU leader David Broder tweeted, “With anti-Semitism on the rise, will the Governor or his Commission to Combat Anti-Semitism call on the Virginia GOP to apologize for this trash tweet?”

In glaring contrast, so far at least, Virginia Republicans – including Glenn Youngkin, Winsome Sears, Jason Miyares, etc. – have been silent. And in this case, for sure, that silence is deafening. Also note that this comes in the context of a disturbing rise of anti-Semitism on the political right in this country, including Donald Trump’s recent dinner with virulent anti-Semite/neo-Nazi Kanye West and white supremacist Nick Fuentes – and failure of most Republicans to condemn that. Very disturbing. 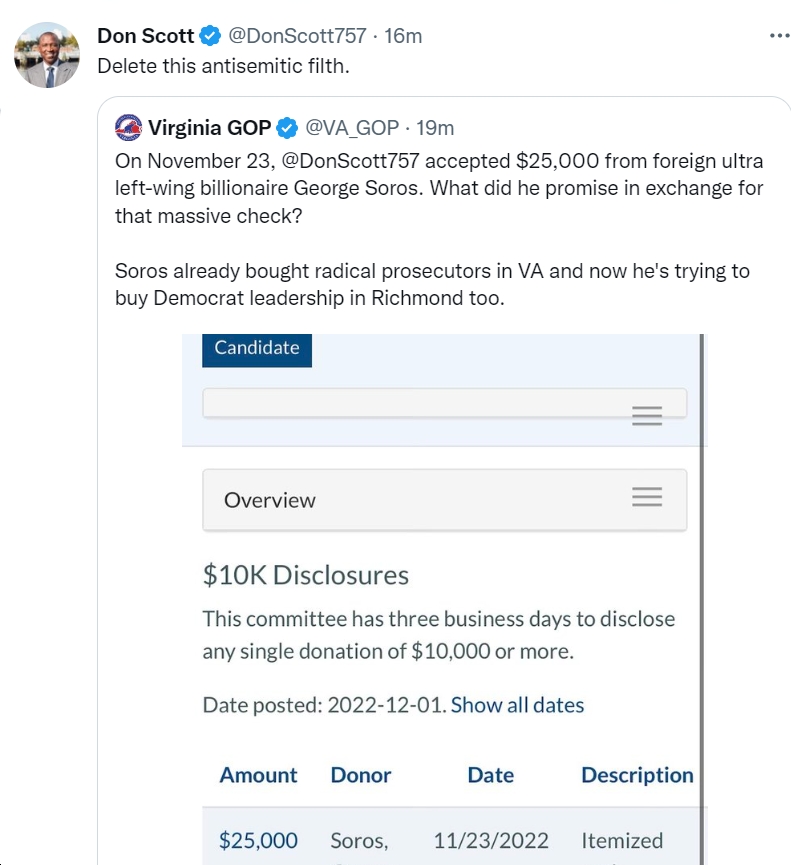 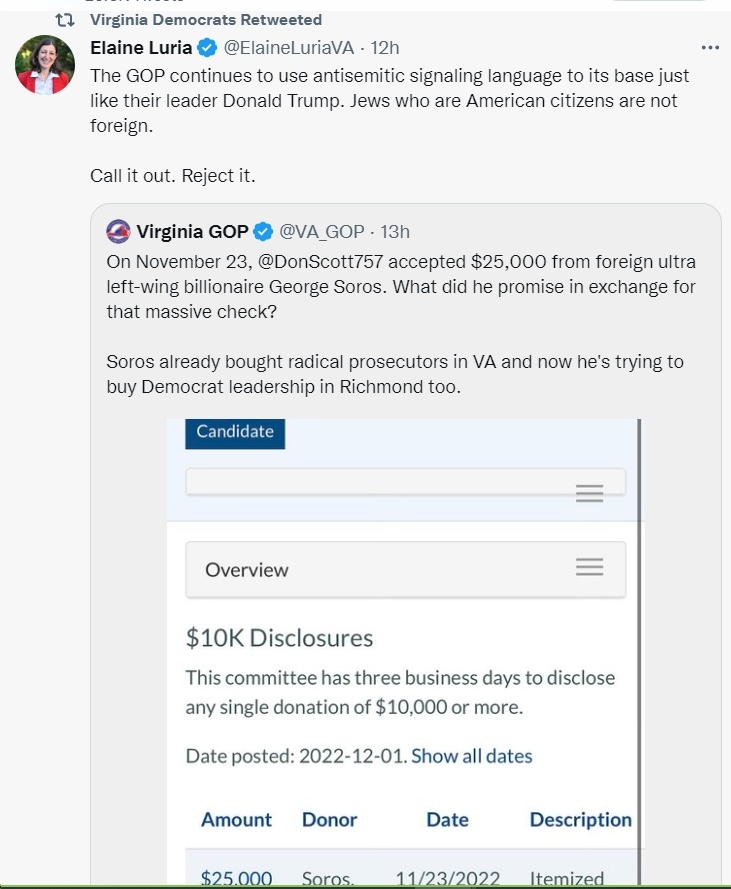 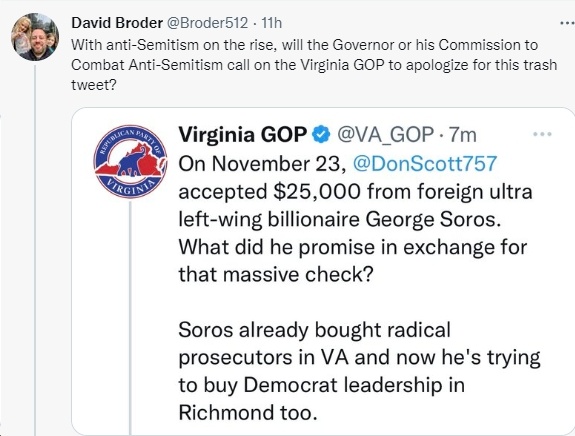 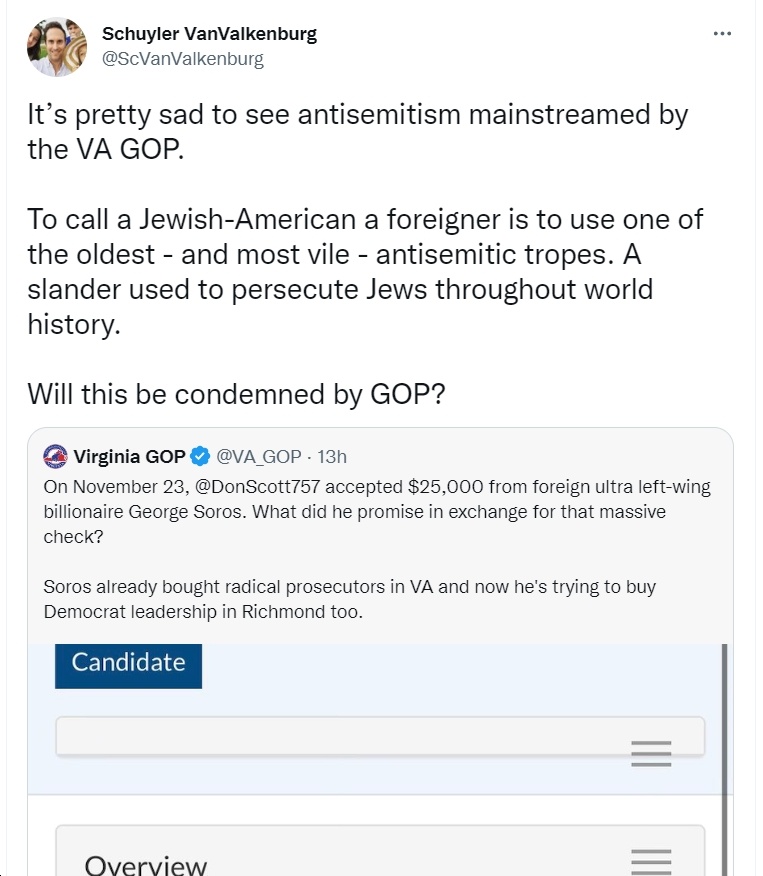 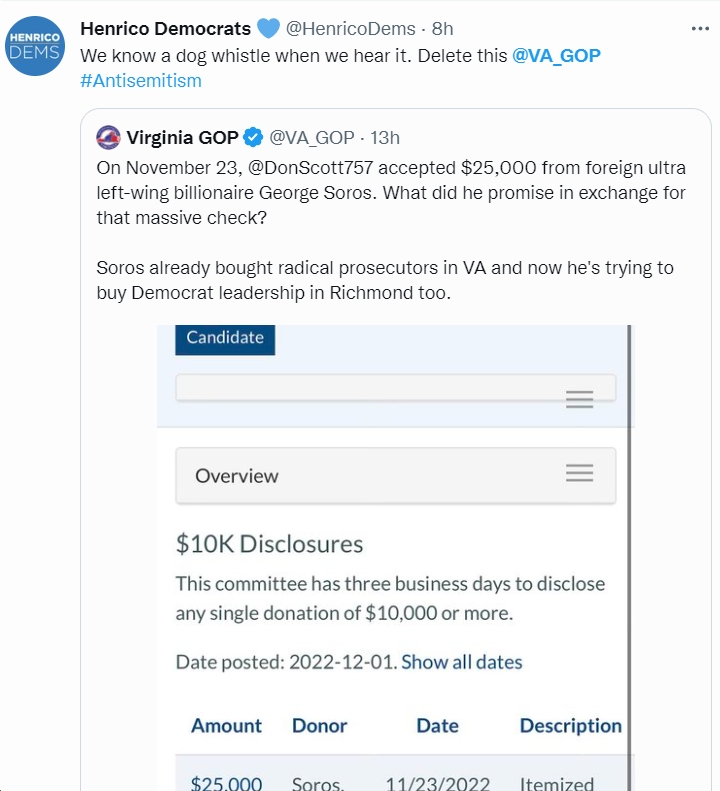 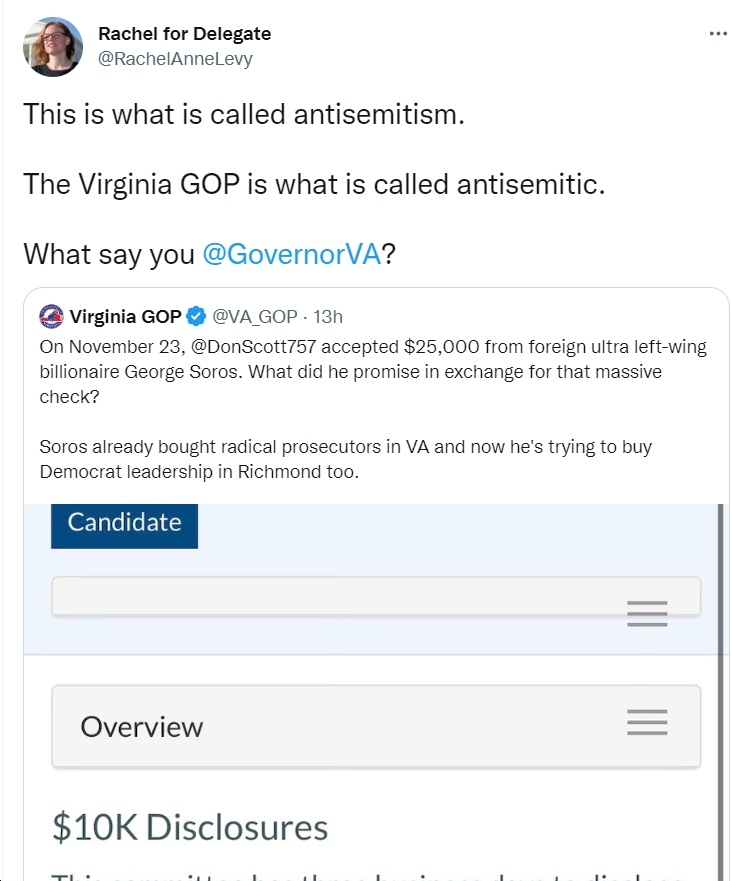