It's time Bob McDonnell and Ken Cuccinelli come clean with Virginians.  It's clear that together they have received almost $200,000 in "gifts," "loans," cash, vacations and fun-filled trips around the country from just one company, Star Scientific.  And that is just what we know about.

The latest revelation in this scandal "is rapidly recasting the state's image for clean government" according to today's Washington Post.  McDonnell and Cuccinelli either failed to report these "gifts" at all or reported them late "inadvertently."

We deserve to know not only all the gifts they received from Star Scientific, but what other gifts did they and their family members receive from other high profile companies?  What favors have McDonnell and Cuccinelli provided?

Also please forward this to your friends, tweet it, and post it on Facebook.  Let's get as many signatures as we can demanding that McDonnell and Cuccinelli come clean with the folks they are supposed to serve.

Authorized and paid for by Virginia Senate Democratic Caucus.

"In the words of Dr. King, 'I have been to the mountaintop, and while I was there, they heavily redistricted the Promised Land.' "

Stephen Colbert: "This is my Alpha Dog of the Week. Folks, this week's Alpha Dogs are the pack of pure-bred Republicans in the Virginia state Senate. This past Monday, these boys redrew the district lines for the Virginia state Senate to make eight electoral districts, six of them presently held by Democrats, more heavily Republican, and to concentrate more minority voters in a new Southside district, and they did it by pushing the redrawn state political map past flabbergasted Democrats."

"In the words of Dr. King, I have been to the mountaintop, and while I was there, they heavily redistricted the Promised Land."

Legislation introduced by Senator Ralph Northam (D-Norfolk) and Senator Barbara Favola (D-Arlington) that would have overturned the mandatory ultrasound law passed last year was defeated 8 to 7.

Dr. Northam, a practicing pediatric neurologist and the only doctor in the Senate, said, "Last year Virginia legislators, mostly men, passed a law that forced a medical procedure on women. Only women and their doctors should make that decision. Richmond legislators with no background in medicine should not make those decisions."

Prior to the vote on SB 1082, Senator Favola said, "The role of the Commonwealth should be to protect a woman's right to privacy - not to trample it."

Senator Herring said, "These clinics provide critical low-cost reproductive health care, and losing one of them because of these unnecessary regulations may cost thousands of women access to health care. The legislature was wrong in helping pass these last year, and it's wrong keeping them this year."

For more information about the Republicans extreme social agenda go to www.varepublicanoverreach.com.

Improving Education
Senator George Barker (D-Fairfax) said, "Historically, Virginia has been third or fourth in the nation in terms of educational achievement. We need to ensure that success benefits all Virginians, and we can do that with targeted programs to eliminate achievement gaps."

"Teacher salaries are one of the issues that we're dealing with this year. We have a budget amendment in to increase teacher salaries by 3% during the second year of the biennium. We'd like to go higher than that, but we want to operate within the budget constraints that we have," added Senator Barker.

Expanding Medicaid
Senator Barbara Favola (D-Arlington) said, "About a million Virginians who add to our economy through service jobs, including construction, tourism, and social services, lack health insurance. We must help these hardworking people by expanding Medicaid and providing them with quality health care."

With the legislative Session just two days away, we at the Senate Democratic Caucus have released a new website targeting Virginia Republicans' radical social agenda.

VARepublicanOverreach.com documents the Republicans' assault on women's health care. With Republicans poised to renew that agenda in the coming Session, Senate Democrats will post updates that highlight the ongoing costs of Republican extremism.

The website also features two web videos, titled "2012" and "Bad for Business," which show how Republicans took Virginia backward and made our state a national laughingstock in the previous Session.

This website is a way for the Senate Democratic Caucus to communicate with the citizens of Virginia. Last year, the radical Republican agenda caught many Virginians by surprise. This year, with Republicans proposing even more divisive legislation, we want to give Virginians the information and tools they need to stop radical Republican overreach. 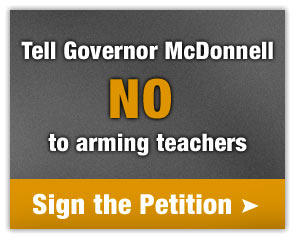 On Tuesday, Virginia Gov. Bob McDonnell said he believes the answer to school violence may be arming teachers and principals. We know that's the wrong answer.

Senate Democratic Leader Dick Saslaw said it best when he said, "When that does not work what's next? Arm the students?  If teachers wanted to carry guns in order to do their day jobs, they would have become policemen."

Giving teachers weapons and turning schools into armed camps is not the solution. Can you sign our petition telling Governor McDonnell that arming school teachers and principals is wrong? More guns in our schools is not the answer.

Sign this petition to get rid of this awful idea once and for all. With your support, we will fight for solutions that actually make a difference, like banning hundred-round magazines and getting the mentally ill the help they need.

We need to look at solutions that actually make a difference, like banning high-capacity magazines and keeping guns away from those who are mentally unstable.

Sign this petition today and tell Bob McDonnell "NO" to arming teachers and turning schools into armed camps.

Virginia Senate Democratic Caucus - December 17, 2012 0
Today, Governor McDonnell unveiled his proposed amendments to the biennial budget.  He proposed diverting state funds from schools to pay for his transportation plan. In total the Governor proposes to take nearly $50 million a year away from schools, first responders and aid to our most vulnerable citizens.  He also said he will let Virginia fall under a federal exchange health care exchange and not expand Medicaid.

Senator Richard L. Saslaw (D-Fairfax), Democratic Leader of the Senate, said of diverting sales tax revenue from the General Fund to transportation, "We need a comprehensive statewide plan to solve transportation. We cannot build and pave roads by taking money out of our classrooms.  It's time we got real."

Senator A. Donald McEachin (D-Henrico), Democratic Caucus Chair, said, "The state's budget should be a moral document that reflects the values and priorities of  Virginians. I find unconscionable the Governor's decision not to include any funding for the expansion of Medicaid to hundreds of thousands of Virginia's working poor. Expanding Medicaid will provide essential health care to hard-working Virginians who are struggling to support families as well as create jobs. In the coming General Assembly Session, I hope to work with my colleagues in the legislature and the Governor to grow jobs and increase health care for Virginians by expanding Medicaid."

Today, the Virginia Senate Democrats called for a special legislative Session to create a state health insurance exchange as provided for under the Affordable Care Act.

Senator Richard L. Saslaw (D-Fairfax), Democratic Leader, said, "The Governor needs to call the legislature back into Session now to get a Virginia-based health exchange created. Virginians deserve an exchange that suits their specific needs, not a one-size-fits-all solution from the federal government. I can't understand how the self-proclaimed party of limited government would allow the federal government to impose a generic exchange on Virginians. We are ready to get to work, and I hope the Governor is too."

Senator A. Donald McEachin (D-Henrico), chair of the Senate Democratic Caucus, said, "The time for action is right now. Governor McDonnell should follow the recommendation of his own expert panel and call the legislature back into session. Virginians have different needs than Texans or Minnesotans, and they deserve an exchange that suits those specific needs.  Democrats stand ready to get to work now to improve access to health care for thousands of Virginians."

In recent days, Gov. McDonnell has called SB 1's restrictions on voting "unreasonable," and said that the legislation imposes an "unduly burden and barriers to your vote." Senate Democrats agree: the Governor should veto this discriminatory bill immediately.

"Senate Bill 1 will systematically disenfranchise the poor, the elderly, the youth, and the disabled, and I call on Governor McDonnell to veto it right away," said Senator A. Donald McEachin (D-Henrico). "The fact is that some of the most vulnerable members of our society will be disenfranchised by this bill, and Governor McDonnell should veto it."