Comstock is polling through Mclaughlin Associates

2019 Elections snolan - October 21, 2014 0
I used an incognito window to go through the questions and was not surprised to see several deliberately misleading questions about John Foust in the poll...  disgusting.

Hopefully John crushes her in the election.

Jealous of the United Kingdom 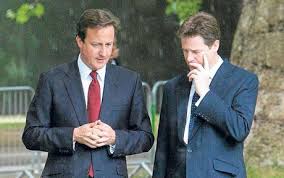 I confess I am a bit jealous that the United Kingdom enjoys a Conservative Party that is willing to accept modern realities and even compromise with moderates on important national issues. I am not a huge fan of the Tories, but they can at least be reasonable and be reasoned with.

UPDATE by Lowell: See here for a less positive view of the Tories.  For instance:

Not that the Lib Dems managed to exploit the inherent weakness in Cameron's situation. When the agreement brokered between the two parties is analysed in detail, it becomes clear that Nick Clegg's supposedly canny negotiators got a lousy deal. The worst elements of Tory policy - immediate spending cuts, an ill-defined and undeliverable cap on immigration, a reduction in the number of MPs and those deeply unpleasant married couples tax allowances all survive the axe. Some commentators think Clegg's team did manage to win a few worthy concessions, but in practice the policies they did help secure greater consensus on are unworkable. A unilateral tax on bonuses will simply result in risk migrating across the pond and infecting the global system from a new starting point, while a tax on planes does not directly force consumers to curb emissions in any meaningful way. Those on the left who are now happily defending the Liberal Democrats' role in government are asking to be disappointed.

Still, I agree with snolan about being jealous of the United Kingdom.  Here in the United States, the British "Conservatives" would be moderate Democrats like Mark Warner, while Labour and the Liberal Democrats would be liberal Democrats or Bernie Sanders-style "socialists."  Note that all of the major British parties would fall significantly to the left of the Republican Party. In fact, it's hard to think of the current GOP - global warming denying freaks, opposed to national health care, rabidly anti-government, anti-choice, etc. - as constituting a serious, mainstream, national party in almost any (other) advanced, industrialized country in the world.  In the the U.S., however, the political spectrum is sharply shifted to the right compared to the UK's and every other industrialized nation's.  The question is, how did it get that way exactly, and will it ever change for the better?

P.S. We can run through the same exercise using historic Republican presidents like Teddy Roosevelt, Dwight Eisenhower, and Richard Nixon. Today, all of them almost certainly would be Democrats, possibly even LIBERAL Democrats.  Which means that the U.S. political spectrum today isn't just out of step with the rest of the western world, it's also out of step with our own history.  Ugh.

National Politics snolan - April 19, 2010 2
Normally I am a rather quiet advocate for gun rights, but picking the anniversary of the biggest domestic terrorism act as your day to march for gun rights should exclude you from being able to ever own a gun.