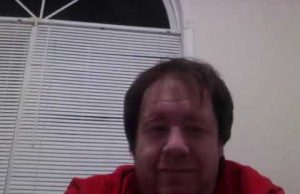 lowkell - April 4, 2020 9
In his first-ever Facebook Live chat (see video, below), Ben "Not Larry Sabato" on Thursday night had some interesting things to say about politics... 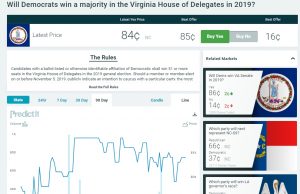 lowkell - August 14, 2019 1
I'm not exactly sure what to make of this, but according to PredictIt's Virginia 2019 markets (see screenshots, below), right now Democrats are strongly...

Boysko Ready To Wipe Out the “Rust” in Fairfax

I was really pleased to see that NLS has declared the 86th House of Delegates race between the presumed Democratic candidate Jennifer Boysko and Del. Tom Rust (R), "one of the marquee House of Delegates races in 2013." Boysko has a primary opponent in Herbert Kemp, but she should easily win that one. The 86th District is one that Barack Obama carried by 61% of the vote. Tom Rust has managed to keep his seat mainly because of his having served as mayor of Herndon and by good constituent service, but NLS points out that Boysko's service as Herndon aide to Fairfax Supervisor John Foust  will give her some real political strength in Rust's Herndon stronghold.

I first met Jennifer Boysko during the Howard Dean campaign for president. Back then, she was a whirlwind of effective activity as the State Director for Dean's campaign. I know that she will bring that same energy and political know how to her campaign for the House.

There are a couple of ways we progressives can assist Jennifer's campaign. First, go to her website and check out the impressive list of endorsements she has. While you are there, take time to hit the "Contribute" button and add to her war chest. Also, go to the Democracy for America website and support Boysko's endorsement by Democracy for America this year. DFA is a PAC that was formed out of the Howard Dean campaign for president.  Each year it endorses progressive candidates at all levels of government. That endorsement brings contributions and volunteer recruitment that often make the difference between success and failure. Candidates receive the endorsement based upon the grassroots support expressed on the DFA website.

The 86th is not the only Republican-held HofD district that Barack Obama and Tim Kaine easily carried. They should be the first districts where Democrats nominate first-tier candidates to take on incumbents.  In fact, if the Democrats ever have any hope of taking back the House, they will emulate what the Republicans did back when they were a "permanent minority" gerrymandered out of districts all over the state. They will run strong candidates in every district every election until they break through the gerrymandering. If the GOP can do it, so can we. We won't become a majority this year, but eventually we will if we don't give up.

The Richmonder - August 18, 2010 3
Borrowing a theme from the far right wing, blogger Ben Tribbett has launched an all out attack against U.S. Senator Mark Warner:

What the hell is he thinking?

I've been to this once a year event (probably 10 times over the years) and it's a great party.  But why would Mark Warner have his annual Pig Roast on September 11th this year?  The large pig being carved up, the hay rides, and a big party across his lawn and around the pool just doesn't seem appropriate for the 9th anniversary of the September 11th attacks on New York and Virginia.

I'm going to call Senator Warner's office first thing in the morning to find out about this.  For now, all I can say is this.  If Mark Warner's political judgment is that this kind of party is acceptable on 9/11, then I am very grateful that he didn't run for and wasn't elected President.

You can read the original attack with links at Not Larry Sabato.

There are a couple of notable features to this story and at least one unanswered question.  The first is the grounds for the attack.  Tribbett--who claims to be a Democrat--has adopted the hardest of hard right arguments: that 9/11 is "sacred" day and you cannot hold any event on 9/11 other than commemorations of the attacks of September 11, 2001 on September 11th.  I wonder, has Ben Tribbett ever made the same argument in regard to December 7th?  I suspect that any number of Christmas parties have been held on December 7th over the years.  Why no 12/7 outrage?