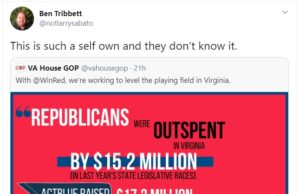 lowkell - April 18, 2020 1
Hahahahaha. Need a good laugh? Check out the following tweets, in which the Virginia House GOP gets mocked for arguing that the "single explanation... 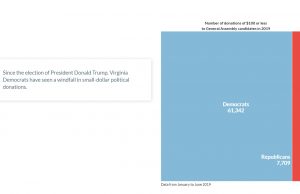 lowkell - August 12, 2019 0
Interesting graphics from VPAP, showing that "Democrats running for the Virginia General Assembly are winning the battle for small-dollar donors" (61k+ donors to 7.7k...

Good for the Kaine campaign on this one. Apparently, they read Blue Virginia! :)

We always expected that George Allen would go on the attack against Tim Kaine - but now Allen's campaign is attacking you.

In the past three months, we've used many tools to build our network of grassroots supporters, including using a website - ActBlue -- which makes it easy to process contributions from small donors who want to take back ownership of our political process.

Responding to the outpouring of support we've received, Allen's campaign went on the attack, calling ActBlue and our small donors "special interests."

This is absolutely absurd.  The real special interests in this race are the ones funding Karl Rove's shadowy group that accepts anonymous, limitless contributions so they can run attack ads here in Virginia.

Together, let's send a message: when the Allen campaign denigrates the power of ordinary individuals to come together to change our politics, it only motivates us to fight harder to send Tim Kaine to the US Senate.

Click here to make a contribution.  Together, we can fight back against the shadowy, outside groups coming into the Commonwealth and instead make this election about the people of Virginia.