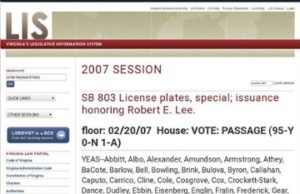 Just 10-15 Years Ago, Virginia Legislators Were Voting Overwhelmingly to Approve...

lowkell - June 18, 2020 0
How far and how fast has public opinion shifted in just a few years? Recent polls show rapid shifts on Confederate statues (as of... 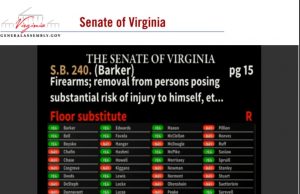 lowkell - January 21, 2020 4
Yes, elections really do have consequences - see below for what's happened already this afternoon in the Virginia State Senate, now under Democratic control...

Today the IRS published a ruling for "individuals of the same sex who are lawfully married." Unlike the state residency restrictions published by the Social Security Administration, the IRS will recognize marriages of same-sex spouses even if the married couple resides in a jurisdiction that does not recognize the marriage.

"Any same-sex marriage legally entered into in one of the 50 states, the District of Columbia, a U.S. territory or a foreign country will be covered by the ruling. However, the ruling does not apply to registered domestic partnerships, civil unions or similar formal relationships recognized under state law." (emphasis added) IR-2013-72

This ruling affects not only returns filed for tax year 2013, but also affects all prior years during which individuals were legally married. It appears that individuals affected may choose whether or not to amend prior year returns based upon their circumstances and whether or not it is to their benefit.

"Generally, the statute of limitations for filing a refund claim is three years from the date the return was filed or two years from the date the tax was paid, whichever is later. As a result, refund claims can still be filed for tax years 2010, 2011 and 2012. Some taxpayers may have special circumstances, such as signing an agreement with the IRS to keep the statute of limitations open, that permit them to file refund claims for tax years 2009 and earlier."

This ruling not only applies to individual tax returns but also gift and estate tax returns. Additional guidance can be found at Answers to Frequently Asked Questions for Individuals of the Same Sex Who Are Married Under State Law on the IRS website. The ruling will not, however, automatically extend to state individual filing statuses in states like Virginia that do not recognize same-sex marriage.

Some Marriages Remain More Equal Than Others

Two months on, a hodgepodge of policies have emerged reflecting the limited scope of the Supreme Court's decision regarding the Defense of Marriage Act. Homeland Security and the Social Security Administration policies diverge. The Internal Revenue Service has yet to decide which same-sex couples may file as married.

The Supreme Court ruling left intact a paragraph in the Defense of Marriage Act (DOMA) that is likely unconstitutional. That is the one that blows by the concept of full faith and credit being extended between states. This situation is not without historical and case law precedent; many states once refused to recognize interracial marriages performed in other states. This issue was not within the scope of the case as New York recognizes same-sex marriage. That paragraph of DOMA is an obstacle to clear and consistent federal policy. Same-sex couples may find that in order to benefit from the limited protection afforded by the decision, they will be forced to move to a state that recognizes same-sex marriage. It is almost certain that couples in unions that are not legal marriages, civil unions and registered domestic partnerships, do not benefit from the decision.

The practical effect on same-sex married couples begins to become evident in policy that has been promulgated by the Social Security Administration. The bottom line thus far is that for same-sex married couples to be considered married for social security purposes and enjoy the benefits afforded married couples, they must be married in a state that recognizes same-sex marriage and live in a state that recognizes a same-sex marriage of the state where married. For Homeland Security's purposes, however, this same standard does not apply to couples who were married outside the United States and are immigrating, though the Social Security Administration literally ignores them.

The Internal Revenue Service (IRS) has yet to define marriage for tax purposes. Its website still contains the guidance predating the ruling. There are a variety of combinations that could be reflected in policy, but for practical purposes, it may be simplest for the IRS to follow the lead of the Social Security Administration, determining marital status based upon the laws in the state of residence. So, a couple married in Washington D.C. and living there would file federal and district returns as married while that same couple living across the river in Virginia would file using an unmarried federal and state status.

So, for now, same-sex marriage is not fully portable. And as for the Commonwealth of Virginia, it disintegrates at the state line.

DOMA, Discrimination and the Constitution

Elaine in Roanoke - March 29, 2013 3
Perhaps someone with a legal background can answer a question or two I have about the Defense of Marriage Act now under review by the Supreme Court, as well as state laws that vary in their treatment of single-sex marriage. Long ago, when I studied government on the high school and the university levels, I read carefully the Constitution of the United States.

Article IV, section 1 of the Constitution (that document Republicans in the House have become fond of reading aloud at the start of each Congress) states, "Full Faith and Credit shall be given in each State to the public Acts, Records, and judicial Proceedings of every other State. And the Congress may by general Laws prescribe the Manner in which such Acts, Records and Proceedings shall be proved, and the Effect thereof." Or,  as the example given by USLegal.com explains, "For example, a marriage which is recognized and performed in state A should be considered as a valid marriage by state B even if state B does not recognize the type of marriage, for e.g. same-sex marriage." Remember that marriage as recognized by a governmental entity is a legal "contract."

So, by that reasoning the state of Virginia would have to recognize same-sex marriages from the states that grant them if a same-sex, married couple moves to Virginia, right? Doesn't the Full Faith and Credit Clause override the denial of equal rights for such couples recently placed in the Virginia Constitution?

My other question has to do with Article IV, section 2 of the Constitution that reads, "The Citizens of each State shall be entitled to all Privileges and Immunities of Citizens in the several States." According to USLegal.com, "Under this clause, people of all states shall enjoy free mobility between each state and also enjoy all privileges and immunities of free citizens in all the states." So, how can the Federal government by a law like DOMA deny the "privilege" of a marriage granted by a state from being recognized as such by the Federal government? A three-judge panel of the 1st U.S. Circuit Court of Appeals has ruled that the federal Defense of Marriage Act is unconstitutional, at least the benefits part that denies gay couples the same federal benefits as heterosexual couples. It did not rule on the constitutionality of other sections that say that states which refuses to recognize same-sex marriages cannot be required to recognize such marriages from another state. It also didn't address whether gay couples have a constitutional right to marry under the 14th Amendment.

I'm no lawyer, but it seems to me that, as significant as this ruling is, it doesn't change the situation in Virginia at all, where in 2006 for the first time the state constitution was amended to take rights away from citizens of the state. That marriage amendment doesn't even allow for civil unions. It doesn't allow for what used to be called "common law marriages," where a couple - gay or heterosexual - that stayed together for a set number of years was recognized as being married.

When this case gets to the Supreme Court, I can't guess how the far-right, conservative "gang of five" will rule. Will they go with their "states' rights" tendency and agree that the federal government has no role to play in defining marriage, or will they be so biased by their homophobia that they will reinstate DOMA?  Beats me.

Either way, at some point Virginia must confront the injustice that voters put into our constitution six years ago. Barring a ruling saying that all Americans have a constitutional right to marry by the Supreme Court, it will take far more political courage than Richmond's politicians have to undo the wrong done in 2006.