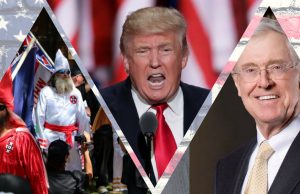 lowkell - August 31, 2016 5
Sadly, the party of voter suppression and disenfranchisement - that would be the Virginia GOP, formerly the "Party of Lincoln" but now the "Party... 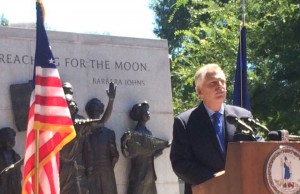 lowkell - August 22, 2016 3
Gov. McAuliffe speaking a few minutes ago (see above for video; photo by Del. Jennifer Boysko): We are here today to talk about an issue...

Saturday News: “Democrats Are Now the Party of Optimism;” Republicans the...

lowkell - July 30, 2016 7
by Lowell Here are a few national and Virginia news headlines, political and otherwise, for Saturday, July 30. Also check out the White House weekly...

lowkell - July 19, 2016 1
Great work by ProgressVA (see video and press release below) on the rally outside Virginia's Supreme Court today in support of ex-felons' voting rights....

lowkell - June 22, 2016 2
This morning on WRVA's "Ask the Governor" show, Gov. McAuliffe responded to the "amicus brief" by 43 Virginia Commonwealth Attorneys (CAs) on the restoration...

Annabel Park and Eric Byler are champions of civil liberties. They have made many films about the encroachments into those liberties. But this one is close to my heart. There has not been much out of the state capital here in Raleigh to make me proud since I relocated here one year ago; perhaps only former Governor Perdue's veto of the Tea Party's dismantling of voting rights (and a few other vetoes).

That was then. Perdue resigned and her Lt. Governor lost the governor's race to the best friend energy companies and school privateers ever had, long-term Duke Energy employee, Pat McCrory. There is nothing stopping the out-of-control General Assembly (GA) now.

The GA has drastically cut unemployment insurance, slammed public education, and showered goodies on charters (bestowing pretend oversight as it does), raised the sales tax to give cuts to millionaires, passed the most repressive and homophobic law in the nation, voted to allow exploratory horizontal fracking, and banned government scientists from studying sea level rising. They are also disemboweling environmental regulations.

Meanwhile, the governor wants to cut state taxes in half, a proposal so draconian that even Koch brothers ally, Art Pope, the new state budget director (talk about the fox in the hen house), said it went too far! Imagine how bad it is when Art Pope says it's too much. That is only a short list of the ugliness. I will have more to say on some of the other misdeeds of the North Carolina GA.

The multi-pronged attack on voting rights strikes at the heart of what has been a progressive and continually improving state for civil liberties since Terry Sanford led the state in the 1960s.  This was not who we are, but sadly, it is now increasingly so--unless we stand up to it. Annabel and Eric have captured the rising chorus of those who have had enough. Bravo!