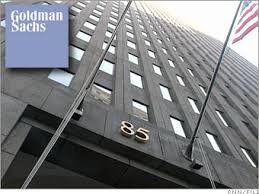 As early as today, the U.S. Senate will be voting on something called the "Merkley-Levin amendment" (see here for a fact sheet). As the Coffee Party writes, "This critical amendment would ensure that Wall Street banks like Goldman Sachs don't get a government guarantee when they make huge, risky bets in the markets, and it would stop banks from engaging in Goldman-Sachs-style bets against their own clients."

Essentially, Merkley-Levin expands and codifies the Volcker rule, by  banning financial institutions which borrow using the Federal Reserve's discount window from using those funds for proprietary trading (aka "in-house hedge funds"). In addition, it addresses the conflict of interest between securities underwriters and in-house traders, getting at the heart of SEC and DOJ accusations against Goldman Sachs.

Predictably, Wall Street has lobbyists swarming over Capitol Hill trying to kill this amendment, leaving the pro-reform people badly outgunned.  That's why it's important you call Sen. Warner's office today, at 202-224-2023, and request that he vote "yes" on Merkley-Levin. As you can see from this whip count, Jim Webb supports the Merkley-Levin amendment, but Mark Warner is (unfortunately) "leaning no."  Let's see what we can do to move Warner from "leaning no" to "leaning yes" today.  Thanks.

Mark Warner on Offshore Oil Drilling: Pause, But Not “Never Ever...

I agree with Mark Warner regarding offshore oil drilling that we should pause, I just believe that "pause" should be "forever." Instead, we need to focus on energy efficiency, offshore wind, wave, solar, even nuclear power.  The bottom line, though, is that we need to wean ourselves off of polluting fossil fuels and move to the next generation of carbon-free, clean energy. Offshore oil drilling certainly does not put us on that path.

P.S. Instead of more disastrous oil spills, how about "The Five Percent Solution?"

Sen. Mark Warner said today on C-SPAN's "Newsmakers" that the Senate could approve an amendment to reinstate a main element of the Glass-Steagall Act of 1933. That law separated commercial banks and investment banks into separate entities.

Sen. Warner is a member of the Senate Banking Committee and has been closely involved in negotiations to get a Wall Street reform bill to the floor. Warner said that he personally opposed such a measure, but there is a bipartisan group of senators who have pushed for the reinstatement of Glass-Steagall,  which would force banks to separate their commercial and investment activities.

The reason Warner gave for opposing reinstatement was that he thinks that it would put U.S. banks at a competitive disadvantage compared to the banks of other nations. (Perhaps this is where the G-8 could do something about that situation, instead of simply gathering from time to time for photo ops.)

Warner on Financial Reform: If we can’t get this done, we...

According to Mark Warner, "If there's not commonality around the fact that we need financial reform, 18 months after the meltdown, then I don't think we're going to get anything done anywhere." On a more positive note, Warner says, "At the end of the day, I do not believe that the complete unanimity of the Republican Party says 'we don't want financial reform in this country 18 months after the meltdown' in 2008, I just don't believe that."  We'll see...

The question is, why are Republicans more concerned with hyper-partisan posturing and with blocking reform of Wall Street than with protecting Americans from another financial meltdown? Priorities, priorities, I guess.

If you really want to enjoy this video, I suggest you take a shot every time you hear Mark Warner use the words "moderate," "bipartisan," or "work across the aisle." Cheers! :)

According to the Washington Post, "A group that includes victims of the Virginia Tech massacre and their families said Monday that Sen. Jim Webb (D-Virginia) met privately with them and gave his commitment to support a federal law requiring that buyers at gun shows undergo background checks before purchasing firearms." Yesterday, however, Webb's office issued a statement that "was noncommital about Webb's support for the so-called gun show loophole."

As far as Sen. Warner is concerned, "family members met with Warner on June 9 and he was noncommittal on the issue."  His office also issued a statement yesterday:

Senator Warner has a record of supporting Second Amendment rights and he will weigh any future proposals that come before the full Senate. He also will continue to work for full funding to make sure the National Instant Criminal Background Check System is complete and up-to-date - improvements that were mandated by Congress following the 2007 Virginia Tech tragedy.

Can anyone translate that from "politician" into "English?" Heh.

UPDATE: Mark Halperin weighs in, says (correctly) that the Republicans are "willfully misreading" (aka, "lying about") this bill. What else is new, unfortunately.

Mark Warner on Financial Reform Legislation: “This should not be a...

"I'd love to hear from Senator McConnell and some of the others specifics, not just general attacks..."

"I'm still relatively new to this job, and I didn't get the memo yet that we weren't actually supposed to get stuff done in a bipartisan way...this should not be a partisan bill."

"We need to set financial rules of the road for the next 50-60 years.  We had pretty good rules of the road that were set in the '30s that lasted us 80 years; I'd love to see a bill that would put the next 80 years rules in place." 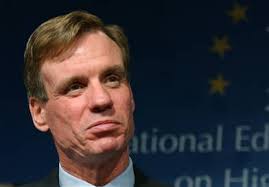 According to Senate Minority Leader Mitch McConnell (R-KY) -- recently seen sobbing and weeping on the Senate floor because his long-time aide Kyle Simmons got a new job -- the Senate financial regulation bill means "endless taxpayer-funded bailouts for big Wall Street banks."   As Ezra Klein writes, McConnell was "knowingly or not, taking aim at a policy that had been jointly developed by Sens. Mark Warner (D-Va.) (pictured above) and Bob Corker (R-Tenn.)." Not surprisingly, that didn't make Mark Warner particularly happy.

..."It appears that the Republican leader either doesn't understand or chooses not to understand the basic underlying premise of what this bill puts in place."

"Again," says Warner, "it's either that they don't understand or they choose not to understand. There's nobody in the financial sector who believes this. They'd laugh at the proposition that $50 billion is enough to get you through the resolution process if a couple of firms go down. What we've heard time and again is that the challenge in a crisis is to buy enough time to keep the lights on for a few days till you get the FDIC in here. You could make it smaller. Corker and I spoke about $25 billion. But this is funded by the industry."

"And here's the hypocrisy of the Republican leader's comments," continues Warner. "I can guarantee you that if there had not been some pre-funding, the critique would've been: 'Look at these guys! They've left the taxpayers exposed! What's going to keep the lights on for these few days? It's going to be Treasury funds or Federal Reserve funds. The taxpayer will be exposed!' "

"If you haven't spent time with these issues," Warner sighed, "it's easy to pop off with sound-bite solutions that don't work."

It's frustrating, but this is how Republicans are on practically every issue these days. Just like when they attack, without any apparent shame, their own ideas - "cap and trade" (came out of the Reagan Administration), the "individual mandate" (Republican alternative to the "employer mandate"), for instance. Now, they're attacking financial reform developed by a centrist Democrat (Mark Warner) and a Republican (Bob Corker)? It's utterly bizarre, except when you realize that they'll say anything in order to win the next election. That's all it comes down to with these people, unfortunately, and it's very sad to see. Anyway, I'm glad to see Mark Warner hitting back and pointing out Mitch McConnell's utter "hypocrisy" and "sound-bite solutions." I'm also glad to see Warner working on solving the problem, "in the arena," as opposed to sniping from the back benches...