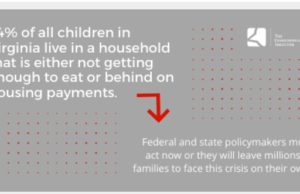 Blue Virginia - September 17, 2020 0
From the Commonwealth Institute for Fiscal Analysis: New Census Income and Poverty Data Shows High Levels of Inequality Even Before Pandemic, Leaving Many At Risk...

Virginia Drivers License Suspensions Amounts to “Crusade Against the Poor”

lowkell - July 20, 2016 1
Sponsored Content By Karin Riley Porter, a criminal defense attorney in Virginia, covering cases such as DUI, reckless driving, assault, and drug crimes. When it comes to the...

Maybe Exxon Mobil’s Profits Can Buy Us a New Planet Exxon Mobil made more than $3 billion in profit per month in the first quarter of 2013 and its CEO says now is no time to go using less oil just because it's destroying our planet's climate:

The CEO of Exxon Mobil Corp. says there's no quick replacement for oil, and sharply cutting oil's use to reduce greenhouse gas emissions would make it harder to lift 2 billion people out of poverty.

"What good is it to save the planet if humanity suffers?" CEO Rex Tillerson said at the oil giant's annual meeting Wednesday.

Think about how much oil the world's poor consume. Are they buying cars and driving to work, or are they walking or biking? Would they be helped more by lower gas prices for cars they can't afford anyway, or by making small-scale clean energy more affordable - solar-powered local water filtration systems, home solar stoves, and better battery storage?

Now think about who suffers most from global warming-fueled extreme weather disasters. Is it the ultra-wealthy like Rex Tillerson? Or is it that subsistence farmer in Africa who Tillerson's holding up as a human shield to protect his company's mind-bogglingly huge profits?

It's just astonishing to us how long this campaign has gone on with no discussion of what's happening to poor people. Official Washington continues to see poverty with tunnel vision - "out of sight, out of mind."

So begins this post by Bill Moyers, whose title is included in the title of this post.

Too often poor people are forgotten in our politics.

It is appropriate to read the words of Moyers on this topic on this day, which would be the 104th birthday of his mentor, Prsident Lyndon Baines Johnson, vastly underrated as a President, whose Great Society programs did as much to alleviate poverty and discrimination in this country as did any other President, being matched only by the New Deal of FDR (which unfortunately did not address discrimination).

Republicans continue to play to their fringe constituency. Today's game, the House Budget Reconciliation bill, revealing the Republican vision for America. This bill would do grievous harm to Medicare and destroy jobs while cutting taxes for the wealthy. Republicans are using the deficit to end essential programs for the poor.

An initiative that will do to the states what Governor McDonnell has done to localities in Virginia, Republicans in Congress are moving to pay for more Pentagon spending at the expense of poverty programs. And while education and social services have already suffered in Virginia, this would be the death knell for many programs that allow families to remain intact and achieve economic independence. Among other cuts, the bill repeals Social Services Block Grant (SSBG) funds which provide support for:


I do solemnly swear (or affirm) that I will support and defend the Constitution of the United States against all enemies, foreign and domestic; that I will bear true faith and allegiance to the same; that I take this obligation freely, without any mental reservation or purpose of evasion; and that I will well and faithfully discharge the duties of the office on which I am about to enter. So help me God.

She wants NO increase in taxes on the wealthy (or no revoking of such things a farm credits for non-farmers like her).  Her "family farm" and her husband's business feed at the federal trough. She currently lives on the taxpayer dime.  She even thinks she should live at the citizens' House.  Ironically, she lectures President Obama that he should get a "real job"!?!?!?  With no sense of irony, she seeks the very same (I guess non-real) job? Yet, except for those programs feeding her, she wants no programs whatsoever that help the rest of America, unless they are church-affiliated schools and "faith-based" community service groups. With Bachmann, it is just not OK for you or me to have medical care, public education, Social Security or anything else. The poor and the hungry need not apply. And, so it is no surprise that her anti-poverty plan is as heartless and pro-corporate as she is.  Here it is, the long awaited Michele Bachmann antipoverty "plan": 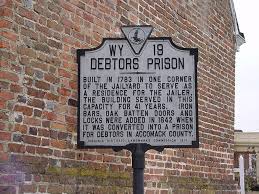 It is not that the US need incarcerate any more of its populace.  With 2% of the world's population, we incarcerate 23% of the world's total inmates, mostly our own people. More than any country in the world, we keep inventing new ways to lock people up.  Sometimes, it's the reinvention of an old way, taking us not just back to the 20th Century, but further back still.  Debtors' prisons were abolished in the 19th Century, but the prison-industrial-complex has a plan.

In some states those owing money are rounded up and thrown in jail. In other words, in some places, it is now a "crime" to be poor, unemployed and in financial ruin. Recall that, according to the Weird Laws app, it's illegal to be broke in Illinois.  Recall also that more than half of all bankruptcies are due at least in part to medical bills.  Job loss is another major cause of unpaid debt.