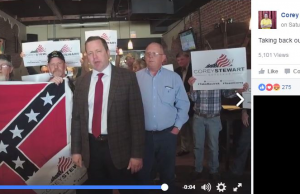 Kenny Boddye - August 18, 2017 1
Despite being just the chairman of the Prince William County Board, Corey Stewart is known far beyond the borders of Virginia. Last year, he...

lowkell - December 24, 2010 0
Congratulations to Eric Byler and Annabel Park for having their documentary, "9500 Liberty," named to Boston Globe's Best Movies of 2010 list as one of the "runners-up." Needless to say, it's not too shabby to be named to a list containing critically acclaimed films like "127 Hours" and "Inception," but if you've seen "9500 Liberty," I think you'd agree. Roger Ebert certainly thought so, in his own 3 1/2-star, "two thumbs up" review.

A few years before Arizona passed its new immigration law, a similar law was passed and then repealed in Virginia's Prince William County. The documentary "9500 Liberty" tells the fascinating story of how that happened, and possibly foretells what lies ahead for Arizona. In Virginia, the law was eventually overturned by a combination of middle-class whites, Republican office holders, the police chief, Latinos and economic reality.

To get more information about "9500 Liberty," click here. With Prince William County Board chair Corey Stewart likely running for statewide office on an anti-immigrant platform, and with Corey and Cooch recently getting into a major spat about this, the subject certainly continues to be relevant.

Filmmaker and activist Eric Byler, who - along with his partner Annabel Park - documented the Prince William County immigration resolution controversy in the powerful film, "9500 Liberty," has some thoughts on a new study on the policy's results, 3 years later. Keep in mind that Eric Byler knows more about this issue than just about anyone else out there. (bolding added by me for emphasis)

*"If Prince William County is a "model" of any kind, it's a model of a costly and dysfunctional way to end up with the preferred approach of the Obama Administration.  Beyond that, we're discussing the impact of the year-long controversy in Prince William County much more so than our short-lived S.B. 1070 precursor."

*"The elephant in the room is the fact that Prince William County's 'probable cause' mandate was repealed, over Chairman Stewart's objection, after only eight weeks of implementation."

*"Chairman Stewart wants to attract the kind of attention Jan Brewer has received thanks to S.B. 1070's very similar 'reasonable suspicion' provision.  But in fact, Stewart is a more appropriate spokesperson for the Obama Administration's Secure Communities program than he is for S.B. 1070."

*"[The] report mentions but does not emphasize the fact that type of crime in which we saw the most significant drop (aggravated assault) was also the category targeted by Chief Deane's Robbery Unit, which went into effect in 2006 before the immigration controversy was initiated."

*"[The] report suggests that some Hispanics did leave, and that many of those who left lacked legal status.  Thus, the only conclusive information in the report is that the controversy succeeded in leveling off the growth of the Hispanic population.  But is reversing or delaying demographic shift more important than other resource needs, and more important than other concerns that impact the lives of county residents?"

more comments on the "flip"

For more information on this important and powerful film, centered in Prince William County, Virginia, click here. And, of course, congratulations to filmmakers Eric Byler and Annabel Park for receiving so much viewership and well-deserved praise for "9500 Liberty!"

Annabel Explains How 9500 Liberty Led to the Coffee Party

I don't agree 100% with the Coffee Party, but I admire Eric Byler and Annabel Park tremendously for pulling it together.  And, of course, their work on the Prince William County immigration fight, including the film "9500 Liberty," was extraordinary. If you haven't seen it, you can watch it on MTV this Sunday evening. It's times like this I wish I had cable TV!

P.S. The Coffee Party's first convention is being held this weekend in Louisville, KY. I'm very curious to see how this will go.

Superb Review of “9500 Liberty” in the Boston Globe

I just wanted to highlight a superb review by the Boston Globe of Eric Byler's and Annabel Park's documentary, 9500 Liberty. Here's an excerpt:

"9500 Liberty'' captures the impassioned town hall debate leading up to the vote, and the fear that animates the pro-mandate citizens is heartbreakingly apparent. They tremble as they describe a coming tidal wave of criminal brown people washing over them and destroying their schools and hospitals (no matter that the crime-rate has actually plummeted in the previous decade). They want us to know that the 9/11 terrorists were illegals; you do the math.

"9500 Liberty'' understands that what moves these people is the idealized America they see vanishing before their eyes, one in which everyone looks and talks like them. Stated reasons for "probable cause'' include speaking Spanish, playing Latin music, owning a chicken, and growing corn.

The movie also understands the melting pot that America actually is and always has been (since we kicked the Indians aside, anyway). The filmmakers follow the resistance of the legal immigrant community - the title comes from the street address of a huge anti-mandate banner mounted by Gaudencio Fernandez, a US citizen since the 1980s - and charts the growing realization of many that, legal or not, they'd best move elsewhere if they don't want to be stopped by the cops every day.

I strongly urge everyone, whether or not you live in Prince William County or even in Virginia, to see this film. Upcoming screenings are listed here. Check it out!

(NY, New York) Sept. 7th, 2010 - MTV Networks will announce upcoming air dates for 9500 LIBERTY at a high-profile screening/panel discussion in New York this evening.  The critically acclaimed documentary chronicles the social, political, and economic impact of The Immigration Resolution, a law closely resembling Arizona's SB 1070 that was briefly implemented in a Virginia county in 2008.

Park will speak on tonight's panel along side Tea Party favorite Corey Stewart, a leading figure in 9500 LIBERTY.  This will provide an opportunity for the two to reconcile conflicting accounts of events portrayed in the film.  For instance, Stewart has publicly denied the vote on April 29, 2008 that removed the most controversial aspect of the law (a key scene in the film), and made claims about immigration and crime that contradict statistics cited in the film.

As Chairman of the Prince William County Board of County Supervisors, Stewart used "The Immigration Resolution" as the center of his reelection campaign in 2007.  Implemented on March 6, 2008, Stewart's law required police officers to question people they had "probable cause" to suspect may be in the country illegally.  With Arizona's version pending in federal court and other jurisdictions around the country considering similar measures, Prince William County remains the only jurisdiction in the United States to implement such a mandate.  Stewart is now lobbying to revive the law, this time throughout Virginia.

I strongly urge everyone to watch this powerful film, which focuses on Prince William County but which shines a light on an issue of national and international importance. Roger Ebert has now posted his glowing, 3.5-star, two-thumbs-up review of Annabel Park's and Eric Byler's movie, 9500 Liberty. Check out the review here, and definitely check out the movie if you can. This issue is certainly not going away anytime soon.

Congratulations to filmmakers Annabel Park and Eric Byler for the well-deserved Twitter "thumbs up" from Roger Ebert - arguably, the best film critic in America.  If you're not familiar with the story told in the film, check out the synopsis here. Better yet, watch the movie if you possibly can, as it powerfully depicts Corey Stewart et al. turning Prince William County into "ground zero in America's explosive battle over immigration policy."  With immigration continuing to be a hot issue nationally, as well as here in Virginia (see today's Washington Post editorial blasting Corey Stewart's "intolerance" and "disdain for facts"), "9500 Liberty" will likely remain highly relevant - and instructive - for years to come.

Eric and Annabel Take the PW Immigration Story Around the Country

Annabel Park and Eric Byler seem to be hitting it big with their superb film on the Prince William County battle over immigration, 9500 Liberty. In coming weeks, the film will be opening in El Paso, Houston, Seattle, Minneapolis, Denver, Wilmington, Chicago, Dallas, Salt Lake City, Atlanta, and several other cities. Extremely impressive. Meanwhile, here in Virginia, Prince William County Board of Supervisors Chairman Corey Stewart hopes to take his so-called "rule of law" resolution statewide, prompting at least one person to challenge him for his job.  Frighteningly, Stewart has ambitions for statewide office, possibly LG in 2013.  Just imagine a ticket of Kook-inelli for Governor, Corey Stewart for LG, and...I'm afraid to ask who the Republicans will come up with for AG.  You thought it was bad now?  Just give it 3 more years, it's a near certainty the Republicans will work on making it worse.