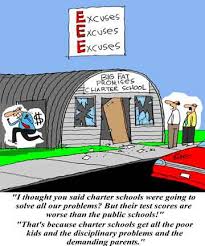 Over at the Dixie Pig blog, Del. Scott Surovell asks, “Do charter schools really work?”  If you listen to politicians like Gov. Bob McDonnell, former President George W. Bush, former President Bill Clinton, and current President Barack Obama, the answer is “yes.”  The answer is also “yes” if you listen to the Washington Post editorial board, which argued last fall that opponents of charter schools “can’t claim any longer that these non-traditional public schools don’t succeed.”  So, the debate is settled?  The rush should be on to crank up charter schools all over America?

Hold on there, not so fast, whippersnappers!  As today’s New York Times writes:

But for all their support and cultural cachet, the majority of the 5,000 or so charter schools nationwide appear to be no better, and in many cases worse, than local public schools when measured by achievement on standardized tests, according to experts citing years of research. Last year one of the most comprehensive studies, by researchers from Stanford University, found that fewer than one-fifth of charter schools nationally offered a better education than comparable local schools, almost half offered an equivalent education and more than a third, 37 percent, were “significantly worse.”

Although “charter schools have become a rallying cry for education reformers,” the report, by the Center for Research on Education Outcomes, warned, “this study reveals in unmistakable terms that, in the aggregate, charter students are not faring as well” as students in traditional schools.

Just to reiterate: 37% of students do worse and fewer than 20% of students do better in charter schools. If true, and there’s no particular reason to believe this study is flawed, that would certainly make me less enthused about this idea.

But wait, it gets worse. As Del. Surovell points out, charter schools also “do not do anything to reduce school expenditures,” they promote the “idea that a child’s future is the function of a lottery,” and they “dilute interest in and support for local schools in our public school system.” Again, none of this sounds in any way appealing. So why the big push for charter schools by politicians on both left and right? Thoughts?