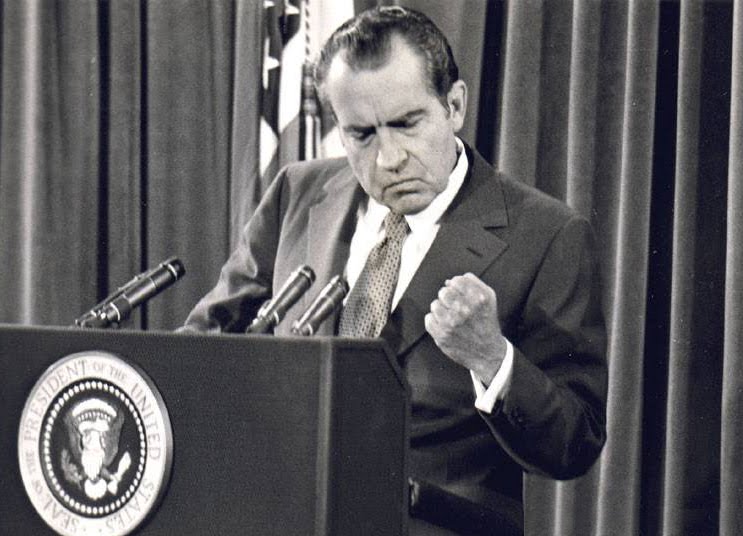 Somewhere, Richard Nixon is smiling.  As the New York Times pointed out the other day, his favorite campaign technique – using massive amounts of money from secret, self-interested corporate donors to buy dirty tricks and dishonest campaign ads – is back, just in time for the November 2nd election.

Public revulsion against the scandals of Nixon’s 1972 re-election campaign helped usher in a wave of campaign finance reform in the 70s.  But just as Republicans worked hard to make Americans forget the lessons of Vietnam, so they are now working to ensure that we forget the lessons of Watergate.  We just need to forget how we’ve been hoodwinked in the past in order to be fooled over and over again.

Needless to say, the same characters who learned the art of dirty tricks in 1972 are still applying them today.  That includes our favorite Jew-counter and dog-barbecuer, Fred Malek, who is applying his expertise as a member of Nixon’s campaign team to his new venture, the American Action Network, which is laundering some $25 million in secret campaign contributions in order to buy key Congressional seats – including in the 11th District where I live.

And once again, the notorious Karl Rove, Executive Director of the College Republican National Committee in 1972, and arguably the most successful graduate of Dirty Tricks U., is leading the charge, as the head of the $65 million corporate money-fueled political misinformation machines known as American Crossroads and American Crossroads GPS.

It is indeed nothing short of astounding that so many Americans seem ready to bring back the same crowd that brought us Watergate, Iraq, the failed response to Hurricane Katrina, and even the Great Recession that has everyone so angry right now, to positions from which they can create even more economic, social, environmental and military disasters.

Have we lost the ability to learn from history?

Indeed, Americans are subject to a lot of influences pushing us to not pay attention or think so hard.  The mainstream media, even while allowing fine journalists to report on stories such as this one, constantly allows the right wing to blur the picture with fog, such as the likes of George Will on This Week saying how “wonderful” it is for democracy that secret corporate donations are once again being allowed, since money equals speech!  (Of course, that would mean that millionaires are entitled to millions of times more speech than the rest of us, but Republicans have no problem with that.)

Others in the media are making analogies from the current situation to that of the last two elections, when Democrats were using so-called 527 groups to bring significant funding to campaigns – without mentioning that those groups practiced full disclosure and were much less likely to involve corporations using campaign dollars to pursue their direct financial interests, like oil and coal companies fighting energy laws and Wall Street firms trying to stave off regulation.

And I can’t help mentioning that the same media that so blindly accepts the “-gate” label applied to what the right wing claims rise to the level of scandal – like some climate scientists writing impolite emails – is largely missing today’s genuine Watergate scandal in the making.  We and they are watching an election about to be stolen before our eyes, and most of us are doing absolutely nothing about it.

The reality of the situation is that corporations have so much power in modern America that we must be eternally vigilant to ensure that they not completely swamp our democracy.  Nixon may be dead but his disciples live on – and we must keep driving wooden stakes through their hearts because they’re just going to keep on coming.