Finally, the mainstream is noticing a long-term story that’s been glossed over: the fact that the famous “Rule of Law’ applies only to little folks, not to the banksters and the world financial elite. That is, the masters of the universe, who invented slapdash mortgages “too good to be true,” marketed them relentlessly to little folks yearning to own their very own homes, always expected the little folks would never default on their home-based debt (because of their sacred obligation to pay on their mortgage contracts), but the clever masters themselves never ever paid the slightest attention to their own legal obligations in their fancy money-making scenario.

Next, those banksters on Wall Street butchered these contorted mortgages into their various components parts and, based on so-expert quantitative analyses, took the resultant financial junk food and spread the manure far and wide around the globe, all dressed up as securitized and risk-rated “investments” when they actually were casino bets where, of course, the Wall Street insiders had the advantage, insured as the bets were by global insurance companies through so-called derivatives.  When the schemes blew up, we all know how the little folk taxpayers were then dragooned into bailing out the financial geniuses on the theory that only this would prevent a total collapse of Western, no, of the world’s, economy…. Now, the other shoe drops.

In the urgency of rushing all the mortgage securities into the hands of far-flung investors, while coppering their wild bets on the risks involved through derivatives, the masters of the universe diddled the paperwork. They were very clear that the little folk had to make their payments, but just who had the mortgage documents proving who held, i.e., owned, the mortgage, well, that got lost in the shuffle. No matter. When the little guy defaulted (when he lost his job, when the peculiar mortgage payments suddenly doubled or tripled, and the homeowner could not re-finance, for example) the giant institutions “servicing” the mortgage, i.e., collecting and processing the monthly payments from thousands of homeowners, went into over-drive processing the foreclosures. No matter that they could not find the genuine  mortgage papers, they developed a mass robo-signing techniques affirming the right to foreclose, delivered the phony documents to the courts and proceeded to foreclose. Eventually, a few lawyers and a judge here and there noticed how squirrelly the paperwork was: not even the experts knew who really owned the mortgage in all or in part. Wait a minute! Stop the foreclosures until we get this straightened out.

When it looked as though the big banksters might suffer another crisis, Congress very quickly and very silently passed legislation requiring states to recognize notarized statements on financial instruments like mortgages which were signed in another state. This would have effectively stopped judges from halting foreclosures and, frankly covered the hindquarters of those careless Wall Street banksters who had ignored their own legal obligations—- the foreclosure hurricane could then proceed. President Obama vetoed the bill, to the concentrated horror of the banksters and of most Republicans, who began crying that the Rule of Law was being violated—– all those undeserving people who never should have signed on for those mortgages when they couldn’t afford the payments were getting away with stealing! Never mind the unmitigated fraud the banksters were committing every day, that was just a minor blip in doing business, and could not get in the way of enforcing the punishment of deadbeat borrowers.

Baloney. From start to finish, there is plenty of blame to go around, but the biggest chunk has to go to the professionals, to the financial wizards who cooked up the mess in the first place.

Yes, there were some home buyers who may have gamed the system, saw a chance to manipulate money in the style of Wall Street and also others who, when the bubble collapsed and the market value of their home declined, found themselves underwater on their mortgage, so they implemented a Big Business technique and walked away from their mortgage in what has come to be called a “strategic default.” Horrors! In fact, they are only doing on an individual basis exactly what big financiers do routinely when a bargain goes sour: walk away if the other party won’t re-negotiate more favorable terms. That’s okay for the elite, but certainly not for the little guy.  Rule of Law, you know.

As a consequence, there is now a firestorm of various States’ Attorneys General (mostly Democrats, but also including a few Republicans) suing and/or calling for a complete halt to foreclosures. If you want to see a long list of headlines showing how Democrats individually and as a Party are protecting the little folks, see digby. Anxious and angry voters should take note.

You may have noticed that Virginia does not have the same foreclosure routine through the court system as most other states, since we are a deed of trust state rather than a mortgage state. This makes it much easier to foreclose here, and so no judge has halted foreclosures in Virginia. Nevertheless, there is no reason to suppose that the exact same fraudulent foreclosures are not going on here in Virginia. Would it not be nice if our very own Attorney General Cuccinnelli were as excited about foreclosures as he is about climate research at U of VA, and started one of his investigations of mortgage foreclosures—- you know, part of his job is consumer protection.

Where do we go from here? It is my contention that we need to get legislation from Congress which forces mortgage holders of properties whose value has sunk (i.e., those where the borrower is now under water) when re-negotiating the loan, to reduce the loan to below the current value of the property, and re-set the rate,

That means that, for a change, the banks/investors will eat some of the loss, and it’s about time, since they’ve stuck the taxpayers and the home owners with all the losses so far, while enjoying their own bailout to the tune of billions of dollars….. Yes, some undeserving property owners will benefit, but this would be a tremendous help to the average suffering middle-class homeowners blindsided by the economic mess created by these very same banksters. Besides, when the banksters do foreclose, they eat the full loss anyway, so why not force them to eat only a part of the loss in advance, and still keep people in their homes?

I suggested this to the lobbyist for the National Association of Realtors; he just rolled his eyes, exactly what happened three years ago when I suggested that NAR and the bankers get together to standardize and rationalize short sales—- but they are now finally doing exactly that. The first objection is of course that this is a socialist scheme which violates Rule of Law. On the contrary, rule of law has already been violated millions of times over by Wall Street, so be quiet already, enough of that. Unless we force such a haircut on investors, we will have a hard time the housing market and take an unacceptably long time to pull out of this recession. Another benefit: workers could then sell their homes and move to another area where they could find a job. Labor has been nailed to the ground in this downturn, unable to move since they could not sell their homes. Greater labor mobility would make workers more employable. This is not something that can be outsourced, by the way.

Do something for the middle class, said Michael Moore. This would be it: freeze foreclosures, and force bankers to re-negotiate the mortgage to below the home’s lower market value, and do it at today’s rates, by the way. So far, Obama’s plan to help homeowners re-negotiate their mortgages with their bank has been too timid and to pro-banker to achieve significant results.  Far too many of the re-negotiations were so punitive that the vulnerable homeowner re-defaulted. It’s time to come down on the side of the middle class homeowner who has, in truth, been taken advantage of. It will take leadership from the Democrats 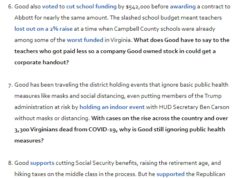