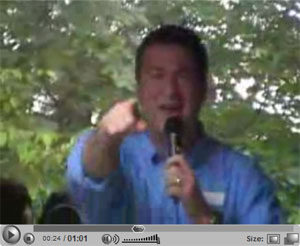 I’ll keep this very brief, because it’s really a very simple issue, though for some reason the Republican Party of Virginia and its supporters don’t seem to get it.

This is a response to Brian Schoeneman’s post “What’s worse? Racism or using racism as a political weapon?” at Bearing Drift.  The title of this post really says it all–and Mr. Schoeneman really ends up accusing himself and the RPV of what he’d like to defend them against: racism.

Mr. Schoeneman is upset that Democrats have made a habit of calling out Republicans when those Republicans act or speak in a way that is blatantly racist.  To Mr. Schoeneman that is “using racism as a political weapon.”

No, Mr. Schoeneman, it is not using racism as a political weapon.  Calling out and criticizing incidents of racism is opposing racism.  Does opposing racism have political consequences?  Quite possibly.  But it is in the power of Virginia Republicans to avoid these consequences altogether by simply ceasing to act and speak in ways that are racist.  Just stop being racists and the issue becomes moot.

Where Mr. Shoeneman ends up accusing himself, and by extension the entire RPV, is by using the phrase “using racism as a political weapon.”  In the current scenario the only organization using racism, deliberately employing racism on its own behalf to promote itself and gain political power, is the Virginia Beach Republican Committee.

Criticizing the use of racism by Republicans to promote the GOP is not racism: it is anti-racism.  Are Virginia Republicans really unable to understand that?