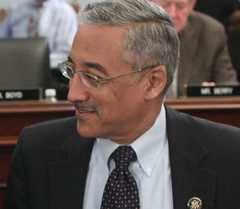 In recent weeks, we’ve heard talk by Rep. Bobby Scott (D-3rd) – and also by his ally (?) Doug Wilder – that Scott is seriously thinking about running for the U.S. Senate in 2012. That leaves Scott as the only Democrat even suggesting that he might challenge Tim Kaine for the nomination. Note that Tom Perriello – and everyone else, basically – has indicated strongly that he would defer to Tim Kaine. But not Bobby Scott. In addition, Scott has said that he’s going to take his sweet time making up his mind – he says he’ll decide by July – knowing full well that Tim Kaine probably can’t wait that long. What’s Bobby Scott’s game here? I’ve been thinking about it and talking to some astute Virginia Democrats. This is what I’ve concluded.

First, from Bobby Scott’s perspective, running for U.S. Senate – or at least floating his name to run for U.S. Senate – makes perfect sense. Here he is, a senior Congressman in the Virginia delegation, having been first elected to the House of Representatives in 1993. Yet, following Jim Webb’s announcement that he’d be retiring after a single term, nobody was talking about Scott as a potential U.S. Senate candidate. That’s got to rankle. At the minimum, he doesn’t want to be Rodney Dangerfield – he wants to be shown some respect!

Then there’s the issue that, following the Democrats’ “shellacking” in 2010, Bobby Scott is now in the minority in the House of Representatives, with no certainty that he’ll return to the majority in 2012 or beyond. At this point, about to turn 64 years old, perhaps Rep. Scott is interested in doing something else prior to his well-earned retirement? It would certainly be understandable!

But hold on, you say, could Bobby Scott really defeat Tim Kaine in a Democratic primary? The answer to that question is almost certainly “yes.” A few points to consider:

1. Upwards of 30%-35% of Virginia Democratic primary voters in 2012 are likely to be African American.

2. A lot of those people, quite possibly a large majority, might very well end up supporting Scott over Kaine in a primary.

3. Tim Kaine’s “base” area is in heavily African American Richmond City, where Bobby Scott would likely do very well in a primary.

4. With the Hampton Roads area likely to go heavily for Bobby Scott, that leaves Tim Kaine’s main areas of potential support pushed back to southwestern Virginia, parts of the 5th CD, and NOVA.

Also consider this question: Would Tim Kaine really want to run in a primary against Bobby Scott? Seriously, why would Kaine even THINK about putting himself through a potentially divisive, potentially bitter primary against a powerful and respected African American opponent, one that he’d be just as likely to lose as to win? If you’re Tim Kaine, do you really want to risk ending your political career with a primary loss? Also, do you really want to risk weakening your party in a key battleground state for Barack Obama’s reelection chances in November 2012? Uh, don’t think so.

Now, let’s consider the narrative in a Scott vs. Allen race. Here, you’ve got an African American running against CCC-loving, “n-word” using, Confederate flag loving, racially insensitive (at best) “Felix Macacawitz.” You’ve also got “Macacawitz” standing between Bobby Scott and history — the first African American ever elected to the U.S. Senate from the states of the old Confederacy since Reconstruction.

Which is the better, more compelling, and potentially more powerful narrative in Virginia – and nationwide, for that matter – in 2012? As a Democrat and also as someone who loves the “game” of politics, I don’t even think it’s close – Scott vs. Allen would be an irresistible story line for journalists, bloggers, talking heads, etc. around the country. It’s almost mind blowing to think about how crazy that would be.

And what about “electability?” Look, 2012 is a presidential year, which means maximum turnout by African Americans, Latinos, women, and young people. How many of those people are going to split their ballots and vote Obama/Allen? Close to zero. How many are going to split their ballots and vote Teapublican/Kaine OR Teapublican/Scott? Again, not many, but possibly some independents and conservative Democrats. Counteracting that, however, would be the potential increase in liberal voters for the historic candidacy of Bobby Scott. In the end, that could be a “wash.” Where Tim Kaine would have the edge would be in three areas: fundraising, initial name ID, and experience/success running statewide. Those are all very important, obviously. Partially countering those, though, could be Kaine’s “baggage” of various kinds, potentially less appeal with core progressives and “base” voters, as well as the weaker “narrative” discussed above.

Bottom line: the last thing in the world Tim Kaine wants to do is run against Bobby Scott for U.S. Senate in 2012 – assuming Kaine even has any enthusiasm about running for U.S. Senate at all, which is questionable. Which means, if Bobby Scott wants the Democratic nomination for U.S. Senate in 2012, it’s pretty much his for the taking. And if Scott gets that nomination, he’d actually have the stronger narrative against George Allen. Of course, Scott might just be putting his name out there to angle for something else – respect, a cabinet position, the nomination for governor in 2013, whatever. We don’t know, but it’s sure fascinating to think about.