I was sad to read ArlNow’s story that revenue at Arlington’s “Artisphere” – which opened in Rosslyn on October 10, 2010 – is running “75 percent below the $789,912 in revenue that planners expected,” because I’m a big supporter of this concept (see the video and also here for more) and would hate to see it fail. I emailed Arlington County Board member Jay Fisette, who has been a champion of the Artisphere, for his thoughts on the article. Here’s Fisette’s response:

I think the article is accurate.  This is a disappointment, but we still believe this model for a cultural center is valid and we’re committed to have Artisphere succeed.  I see the primary reasons for the revenue shortfall at Artisphere to date are:  (1) the original revenue projections were too optimistic and did not provide ample time to ramp up revenues, knowing that Artisphere is essentially a “start-up”, (2) the restaurant isn’t yet open, and it should serve to draw more folks to Artisphere, and (3) the online ticketing got a late start.

A revised business plan is being developed.  I believe rental income can increase.

I sure hope so, but if not, the comments at ArlNow certainly have a broad range of, uh, “interesting” suggestions for what to do with the space: “That space would make a great floor hockey rink;” “If this whole Art thing doesn’t work out I say Dremo’s!”; or “Maybe they can lease the space to a Wegman’s. Just need more parking.” In all seriousness, though, let’s hope the Artisphere finds its footing soon and turns out to be a success story. Although, come to think of it, I love floor hockey (I played for several years on a team in Woodbridge, Virginia), so that wouldn’t be the worst thing in the world. Also, Dremo’s is pretty cool, and although I’ve never been to a Wegman’s, I hear it’s great! LOL 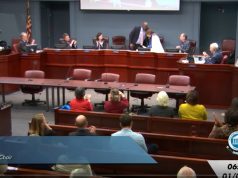