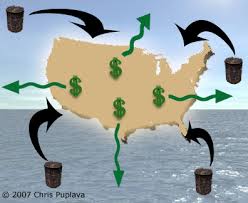 It is a Saturday morning.   The school year is now official 3/4 complete.  Normally I would write something about school, about students, about teaching.  But this morning I read Derrick Jackson’s column in the Boston Globe, It’s still oil and nuclear power for Obama, and found my mind occupied by thoughts flowing from reading it.  The subtitle read “US sits idly by as other nations heavily invest in renewable power” and that perhaps explains why my mind is so occupied.

Others here are far more knowledgeable than am I on energy issues.  People like A Siegel, Jerome a Paris and Meteor Blades have been on this topic since before the first Yearly Kos convention in Las Vegas in 2006.

This is an issue as important as any we face.   It certainly connects with my concerns about public education.

So this morning I find myself impelled to bring attention to Jackson’s op ed, to explore the related issues, and if possible to make an argument as broadly as possible about why an appropriate national energy policy is of immediate and critical necessity.

Jackson begins by criticizing Obama’s speech this week at Georgetown, noting the things missing.  He compares that speech with comments by then candidate Obama about going after the windfall profits of oil companies and reinvesting those funds in renewables.

Instead, he promised to expedite new shallow and deepwater oil drilling permits, even as top environmentalists say many questions remain after the BP spill disaster.

Obama did not address the very real concerns about nuclear raised by events in Japan.

Perhaps the heart of Jackson’s framing can be found in two paragraphs, one somewhat longish, immediately followed by one sentence:

Most important, there continues to be no direct message to the American people that we are living in an unsustainable fantasy, consuming a quarter of the world’s energy. There was no hint of things that would instantly make Americans rethink consumption, such as a gas tax. For the moment, the road-blocking Republicans are winning the day with an ethos symbolized by Governor Haley Barbour of Mississippi, a potential presidential candidate. Last week Barbour told Iowa Republicans, “We need more oil. We need more gas. We need more coal. We need more nuclear. We need more American energy.”

Obama has yet to say that we need less.

We cannot continue on the insane policy of simply generating ever more energy.  We have a culture that makes taking a different position difficult – instant-on television sets, computers and monitors that simply go into sleep mode, but still consume large amounts of electricity, and most of all, the image of every American driving an individualized motor vehicle consuming large amounts of petroleum.

This last, our seemingly insatiable thirst for petroleum, cost this nation dearly.  We could have smaller individual vehicles that were not so gluttonous in their consumption, but we have been manipulated into believing that we need bigger and heavier vehicles for ‘safety’ (although many of our SUVs are in fact more likely to roll over), that we need more capacity (although our seven seat vehicles do more than half their trips with only one or two people), that we need greater towing power (although few of those with vehicles that have such towing power use them for such a purpose except rarely).

Petroleum pollutes.  Petroleum also costs us dearly in expenses for our military, much of which seemingly is dedicated to ensuring the world access to it from sources in less than stable parts of the globe.

But is not just petroleum.   And in some ways the lack of response from the Obama administration should not surprise us.  After all, during the campaign the then candidate signed on to the idea of “clean” coal and nuclear, in part because both coal and nuclear play a major role in Illinois.  We have never solved the problem of nuclear waste disposal, and as recent events in Japan should demonstrate that while a catastrophic failure may be a minimal possibility, when it happens the results will be devastating and long lasting with impact far beyond the immediate area.

Reading Jackson’s piece, one will be remind of certain important facts about energy.

Britain has taxes on fossil and nuclear energy.

Brazil has made a major commitment to sugar cane ethanol.

Germany is collaborating with China on solar power generation.

China is already the world’s leader in clean energy, accounting for nearly half of the world’s solar modules and wind turbines.”

But of course China has more than three times our population, even though its economy in 2010 was only about 40% the size of ours (albeit at an annual growth rate of 10% expanding far more quickly than ours).   Germany, by contrast, has a population less than 1/3 of ours, but as of last year had doubled our spending on clean energy.

We are losing the future in clean energy.

We are destroying our environment in the process.

Jackson quotes a report from Pew and Kelly Sims Gallagher, a professor of energy and environmental policy at Tufts University’s Fletcher School.  These are but two sources of similar statements available to anyone who cares to pay attention.

Too many in our government do not care, or have other priorities that lead them to ignore what such sources can offer.

We pay more for energy as a result

We transfer wealth to other nations, including to China via their financing our debt.

We are destroying our future, which is the future of the young people for whom I am responsible in my classroom.

We could have had a policy that promoted the development of clean energy, thereby creating jobs.  Such jobs are now in China, or in Europe.

What funding we had towards renewables was largely embedded in the stimulus, and was not established as appropriate ongoing programs.  Given the Republican control of the House, such programs cannot now be implemented.  Given also how many Democrats are beholden to energy interests –  for example Sen Landrieu to oil and multiple House members  to coal – perhaps it would have been difficult in a time of financial stress to have established such permanent programs.

Difficult, but not impossible with strong leadership, with leadership that took upon itself the task of educating the American people to what we needed to do.

In 1983 the Reagan administration demagogued education with a report titled A Nation at Risk, claiming that if we did not fix our public school system it was effectively waging war on our own economy, our own society.  That began a spasm of so-called reform that if anything has seriously damaged our educational system.  Schools are a convenient target, and unfortunately in the pursuit of corporate and financial institution dollars for politics too many Democrats, including the two most recent Democratic presidents, have bought into that approach on education.  As a result we are damaging our economic future by our educational policy, because our national educational policy is making things worse.

But what really puts our nation at risk is the combination of our lack of  an appropriate and coherent energy policy and the continuing shift of wealth and political power to corporate interests and the wealthy who benefit therefrom.  The two are connected.

We have seen the power of coal and oil companies.   They profit mightily from our current approaches.  There is no windfall taxes on their profits, so they continue to accumulate wealth, and through that, power.  They are not properly regulated for the benefit of society as a whole.

Nor is the financial sector.  Taxpayer dollars are used to bail them out ostensibly to provide financing for ordinary Americans and small businesses, but which instead is used to speculate in housing, pay bonuses to executives who created the mess which required a bailout.  Meanwhile the financial sector gets significant help from key players in the current administration who came from it (Timothy Geithner and Larry Summers) or who leave the administration to profit themselves (Peter Orszag).   And the increased wealth of such corporate and financial interests gets magnified because of decisions like Citizens United – now both parties are enthralled to the moneyed interests, and the rest of us pay, now and in the future.

We may destroy our economy.  That’s an American tragedy.

Our failure to begin rapidly transitioning to renewables has a far greater impact.   We may destroy the world.

We may not have a nuclear disaster on the scale of Chernobyl or Fukushima, but then again we may.  Meanwhile we are destroying our groundwater by fracking, we are ravaging our landscape by destroying it for coal, we are polluting our air by burning coal and petroleum, and we waste large amounts of the energy we used by not committing to efficiency and conservation.

Were the rest of the world to consume at our rate, we would need a planet with a carrying capacity several times that of the Earth.

We are destroying the future for our young people, for whom there may be decreasing economic opportunities, and a far less healthy planet.

In his penultimate paragraph, Jackson notes how the US sits on the sidelines on many of these issues, and then offers a comparison.

The German Advisory Council on the Environment says that nation can achieve 100 percent renewable energy supply by 2050 without new coal plants or extending the life of nuclear plants. Contrary to Obama’s adoption of the mantra that nuclear energy is less harmful to the environment, the council said nuclear power is “unsustainable” and “indefensible” because of its waste and that it is a target for terrorism.

a target for terrorism

Any one of these should be a sufficient justification for a far different approach.  Together they should provide a real alarm for America, if only the administration were willing to sound it.

That makes Obama’s speech more alarming. Any talk about renewable energy means little until we see a renewal of energy from the president himself.

On this, as on a number of issues, even if I might not have been totally happy with the language of candidate Obama, a return to the policies implied by that language would be a vast improvement on the policies of President Obama.  It would be a start.

I’m not holding my breath, at least not in waiting to see anything like that –  on education, on human rights, on financial regulation, on the economy.

It is not just renewable energy we need.  It is a renewing of the commitment to what this nation should be, a nation of the people, by the people and for the people.

For all the people.

Those to come in the future.

Our lack of an appropriate energy policy, the unwillingness of this administration to lead on this topic, puts us at risk of destroying the future, not merely economically, but something far worse.

Other countries get this.

When will we ever learn?

Somehow I do not feel any peace this morning.