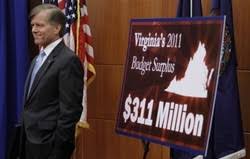 The following press release is from ProgressVA. I hope to see other Democrats, including the narrative-challenged DPVA, making it very clear what a sham Bob McDonnell’s supposed “surplus” actually is. As McDonnell desperately tries to get himself selected as someone’s – anyone’s! – running mate in 2012, this task is more urgent than ever.

“This ‘surplus’ is the result of heavy borrowing, substantial cuts to services, federal stimulus, creative accounting, and not paying our bills,” said Anna Scholl, Executive Director of ProgressVA. “It’s time for long term solutions.  It’s time for a balanced approach.”

“While we appreciate the governor’s attempt to boost his resume for a Vice Presidential bid, Virginia taxpayers deserve facts, not gimmicks. The truth is that Virginia faces an $800 million budget shortfall for the 2012 budget cycle, over $17B in unfunded liabilities for the state pension fund, and a quickly growing balance on the state’s credit card.”

Virginia is constitutionally bound to balance its budget. Revenue surpluses at the end of a biennial budget cycle are simply the result of tax collections out-pacing conservative revenue projections. Furthermore, the majority of excess funds at the end of the budget cycle are already statutorily committed to a variety of programs, including the state’s rainy day fund and Chesapeake Bay cleanup, leaving few discretionary dollars to apply to underfunded programs.

Another loooong, busy day in the Virginia General Assembly https://bluevirginia.us/2021/01/wednesday-news-biden-vows-to-vaccinate-300m-people-in-us-by-end-of-summer-or-early-fall-kaine-collins-pitch-senate-colleagues-on-censuring-trump-the-national-gop-is-broken-state-gops-mi#comment-5243697400