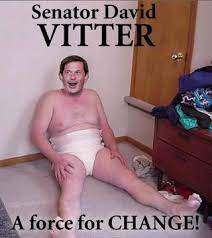 As always, you can tell a lot about a person by the company they keep. In the case of teahadist Miller Baker, the Republican’t nominee against State Senator George Barker in the 39th district, that company is unsavory to say the least. Courtesy of VPAP, here are a few LOWlights:

*$7,500 from the “Louisiana Reform PAC,” the leadership PAC of none other than Sen. David Vitter (R), also known as “Diaper Dave” for his solicitation of prostitutes who would “make him wear diapers.” Despite his sexual proclivities, when it comes to the issues, Vitter is as right wingnut as they get (utterly hypocritical of course), for instance “emphasizing abstinence over sex education that includes information about birth control” and proposing to amend the U.S. Constitution to ban same-sex marriage (because he’s such an exemplar of heterosexual marriage – heh). He’s pretty much a teahadist on every other issue as well. Getting back to the 39th district State Senate race, I think it’s fair to assume, since “Diaper Dave” is one of Miller Baker’s largest contributors (other than the Republican Party of Virginia), that Miller and Vitter are highly simpatico in terms of policy and possibly ethics as well.

*Another major contributor ($2,500) to Miller Baker is Bollinger Shipyards, based in Lockport, Louisiana (what’s with the Louisiana connection?). A Google search of “Bollinger Shipyards” immediately finds this story, in which “The Justice Department is accusing Bollinger Shipyards Inc. of falsifying data that led the Coast Guard to contract with the firm to lengthen eight deepwater cutters, all of which turned out ‘unseaworthy and unusable.'” As one commenter on the Times-Picayune article sarcastically wrote:

There must be a mistake here. This can’t possible be true, they’re all fine upstanding Republicans. They would never, ever think of scamming the federal government at tax-payer expense.

Well, actually, yes they are, and yes they would! Scam the government at taxpayer expense, that is. The question is, why is this slimeball company from Louisiana donating so much money to a teahadist Republican here in Virginia, anyway? Someone should ask Miller Baker, or possibly his Best Friend Forever “Diaper Dave.”

*Another $2,500 to Miller Baker came from Marianne L Horinko, a former Republican candidate who believes things like “a baby in the womb is alive. To assert otherwise is simply not true.” (She also believes that Virginians should be free to carry concealed weapons, and that “this right should be reciprocated between states in a manner similar to how they recognize one another’s driver’s licenses“).

*Ken Kookinelli kicked in $2,500 to Miller Baker’s campaign, because there’s nothing like having a gay-bashing, science-denying, take-Virginia-backwards-to-the-18th-century national embarassment on your team! LOL

That’s just a few of the unsavory characters and right-wing extremists donating heavily to Miller Baker’s campaign for State Senate. That really tells you everything you need to know – DO NOT VOTE FOR HIM! Fortunately, 39th district voters  have an incumbent State Senator who has done a superb job and will continue to do so if they reelect him. Is this a no-brainer or what?!? Go George Barker!

UPDATE: There’s also a Citizens United connection. No wonder why Miller Baker is blowing off forums — he has a LOT to hide!