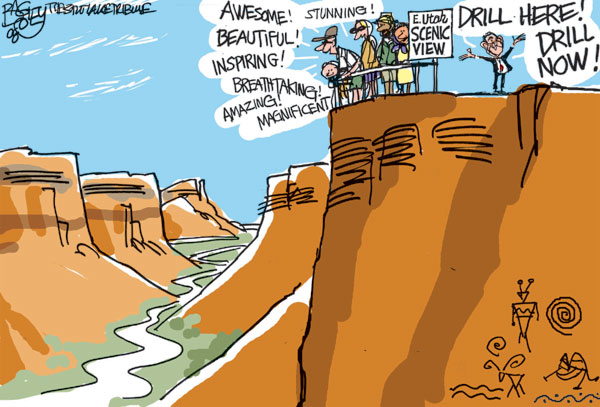 President Obama took another step towards protecting Americans and their natural environment today, banning new uranium mining claims situated around one of America’s most noteworthy physical attractions, the Grand Canyon. However, opponents of the new ban have assailed President Obama’s decision with the usual counter-argument: banning uranium mining is a “job killer.” Of course, when these claims are made, no effort is made to put forward data regarding how many jobs will actually be “killed.” Thankfully, one arm of that terrible institution, the federal government, keeps data on uranium mining jobs in the U.S., the U.S. Energy Information Administration.

But what is even more disturbing is the link between “exposure to radon progeny and risk of lung cancer” among uranium miners on the US Colorado Plateau. That is, there is a positive relationship among uranium miners exposed to radon and lung cancer. And according to the same study in 2009, mortality ratios “have not declined substantially since the 1980s.” One could take the libertarian perspective: it’s the individual’s right to choose to work in a uranium mine and to consequently face the risks involved. But libertarians assume perfect knowledge related to a given decision such as the decision to work in a uranium mine. This is not, of course, a practical assessment of real-life decision-making processes.

Moreover, uranium mining companies seem to have an ideal picture of their own safety procedures. Virginia Uranium Inc., for instance, insists that its uranium mining and milling technologies will greatly reduce the risk to workers and nearby population centers alike. But again, where’s the evidence? We’ve seen the catastrophic effect uranium mining can have on human and environmental health. If the titans of America’s uranium mining industry wish to continue digging holes in the earth they have to prove, without a shadow of a doubt, the benefits outweigh the substantial costs.