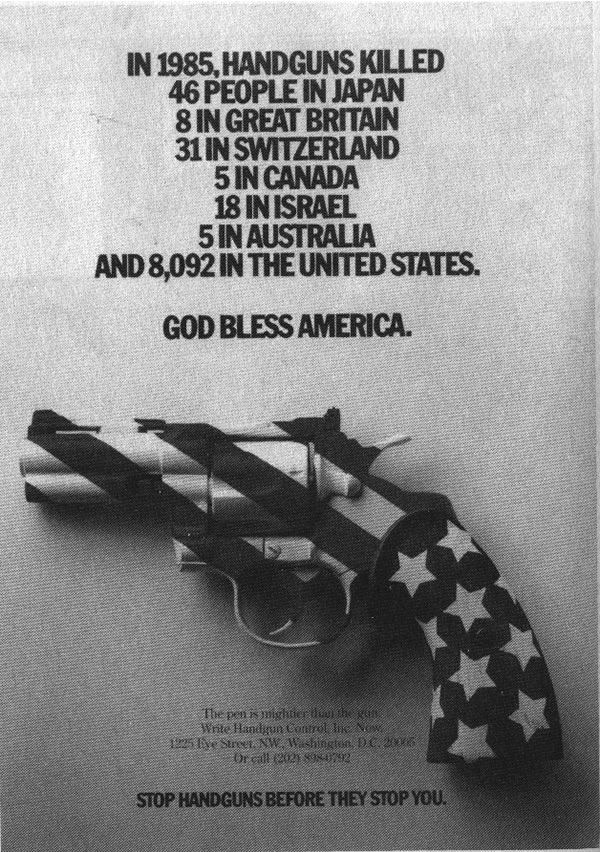 The following is a guest post by 2011 Democratic candidate for Chairman of the Prince William County Board of Supervisors, Babur Lateef.

The American Medical Student Association (AMSA) circulated this flier in 1993. I was in medical school at the time and I was the President of our AMSA chapter at my medical school. AMSA advocated for better gun control laws. It is obvious that physicians should stand up for gun control due to the high number of preventable deaths they cause.  It is good public health policy to favor laws that make it tougher to obtain guns. In the countries listed above, it is difficult to get guns. Thus the reason for the low number of gun related deaths.

Now I understand the importance of the second amendment. As a society we regulate the kinds of arms people are allowed to have. I believe that buying weapons should be heavily regulated.  Virginia passed a law that attempted to reduce gun trafficking (one gun a month safeguard). This law had an affect on reducing illegal gun trafficking.  (Something that everyone should be against regardless of you party affiliation). This was concluded in a report done in 1996 by the Virginia State Crime Commission.

Recently, the Virginia General Assembly repealed this law.  Two Democratic Senators were responsible for passing this repeal. Senators Creigh Deeds (Bath) and John Edwards (Roanoke) were the Democrats  resposible for pushing this bill through. The governor signed it into law yesterday. This law would not have passed without their support.

I have spent the better part of my life fighting for our democratic values. I find their vote and Senator Deeds’ explanation offensive. It makes no sense to repeal this bill. Their vote should force us to examine their records.

Normally I refrain from calling folks out by name. But the recent high school shooting in Ohio is another reminder of why gun laws need massive reform. In a democracy we have to make these changes in steps. We never get what we want the first time around. Gun proponents will say that this law is a first step in further restricting gun ownership. You bet your tail this was! Every American should oppose illegal and irresponsible gun ownership. This law had done this. Senator Deeds’ explanation for why he voted for repealing this bill is posted on the official website for the NRA chapter in Virginia. I would say they wrote it for him but their stuff is usually better written than the nonsense posted here. So I must assume he wrote this and he believes this dribble.

Senator Deeds has been a disaster for the Democratic Party. His run for governor was the beginning of where we are today. That poor campaign was then followed by his lack of concern for the Party during redistricting. He would not give up some of his strong Democratic precincts to his neighbor Edd Houck who ended up narrowly losing his Senate seat. This selfish action by Deeds gave control of the Senate to the Republicans.  During the 2011 campaign he was not helpful to other candidates. He did not pull his weight in fundraising for the party or the Senate caucus. Reports from insiders say he was extremely difficult to deal with and was prone to frequent temper tantrums. Then to add insult to injury he votes to repeal this gun law.

During my campaign for office this past year, I learned much about our political process.  I also learned much about our politicians and activists.  I met people who have dedicated their lives to a liberal agenda.  (Note: I am not afraid to say liberal.  No need to substitute progressive here.) And, unfortunately, I have met those who only care about their own well being. They could care less about the people of Virginia or for members of their own party.  It is those kind of folks who ultimately bring the party down. They need to be called out and challenged.

Senator Deeds is in an ultra safe district.  We need to encourage someone to challenge him in his primary in 2015. Knowing how safe that district is, a Democrat will go on to the Senate. So we won’t be losing a seat if he is challenged and beaten.

I will promise to raise the first 5K to anyone willing to primary him in 2015. You can take that promise to the bank. I will also try to raise matching funds for any money he takes from the NRA.

I am not the only one willing to do this. There are many folks who will do this but will not say it publicly.

What will happen after this is published?  My political consultants would say (I paid them a lot of money during my campaign and I had to run everything by them.  So why not run this by them? J)

1. I will take heat for coming down so strongly on a fellow Democrat.  So be it.  One must stand for his principles.

2. Senator Deeds will show this to the NRA and whine about his vote costing him Democratic support.  He will tell them they need to donate more to his campaign. This will make it even harder to beat him in 2015.

3. And maybe I get a call from someone willing to take up this most noble challenge.  It could be someone dedicated to pursuing a liberal agenda!

4. I will continue to promote smarter gun laws.

We need to make major changes in our party before we can regain the trust of Virginia voters. I believe the time to clean house is now. It is time to deal with our bad “Deeds.”

2011 Candidate for Chair, Board of County Supervisors, Prince William County.