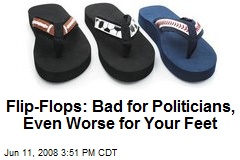 Governor Bob McDonnell, now that the GOP-dominated General Assembly has placed him in a position that is putting his future political viability beyond Richmond at risk, is taking a page from the master dissembler, Mitt Romney, in weaseling out of a flip-flop that the extremists in the Republican Party will not like.

1. Step one: State a position

4. Step Four: Simply deny you’ve changed your position at all

In the space of three weeks, the Governor has said he supported the law that would have forced women to undergo transvaginal ultrasounds even if they did not consent to the procedure, then said he opposed the law, and then insisted that he supports the law and that his position has never changed.

Here is the timeline:

On Jan. 31, McDonnell was asked whether he supported the ultrasound legislation. This was the exchange:

Q: But what do you support – the idea of having a woman have to take a sonogram before getting an abortion? Is that something you would support?

McDonnell: An ultrasound – yes, I actually was the original sponsor of that bill about 10 years ago, to give a woman the right to know all the information before she makes the choice.

Q: Well, giving her the right to know and mandating a procedure are two completely different things.

McDonnell: Yeah, but I think it gives full information – an ultrasound is used – it’s modern technology, the costs have been driven down, to be able to have that  information before making, what most people say is a very important, serious, life-changing decision, I think, is appropriate.

On Feb. 22, however, once it became clear that signing the bill into law would make McDonnell and Virginia a laughingstock and object of derision, and likely destroy any hope McDonnell has of being on a national ticket, the Governor came out against the very same proposed law, saying in a statement:

Over the past days I have discussed the specific language of the proposed legislation with other governors, physicians, attorneys, legislators, advocacy groups, and citizens. It is apparent that several amendments to the proposed legislation are needed to address various medical and legal issues which have arisen. … Mandating an invasive procedure in order to give informed consent is not a proper role for the state. No person should be directed to undergo an invasive procedure by the state, without their consent, as a precondition to another medical procedure.

Today, McDonnell appeared at the State Solutions Conference in Washington, D.C., and was asked about his reversal on the exact same proposed law. As Politico reported:

In his first appearance at Politico’s “State Solutions Conference,” McDonnell was asked Friday to explain why he had changed his view on the invasive ultrasound bill when he had previously suggested that he was prepared to sign it into law.

The Virginia governor rejected the idea that he had somehow reversed his opinion, insisting, “I still support the bill.”

(Note: You can see a video of a different part of McDonnell’s appearance at this event in which Maryland Governor Martin O”Mally schools him here) .

Look, whatever else one might think of McDonnell, I think he has governed in a mainly honest (for a politician) manner. He is clearly a smart guy, and a skilled politician.

Bob McDonnell turning himself in another Romney is just sad, but this is what happens when you try to placate today’s unforgiving and extremist Republican Party without sounding too extremist yourself, and destroying any future credibility you might have with the majority of Americans who are not far right wing  ideologues.