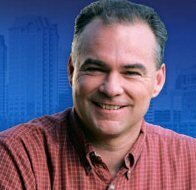 note – this was written for Daily Kos, which explains some of the phrasing.  As a Virginia story, it also belongs here.  I wrote it for Daily Kos because this race is and should be of national importance.

over dinner last night.  His campaign reached out to a group of us, bloggers from Northern Virginia and the head of Virginia Partisans, the most important LGBT political organization in the Commonwealth.

Most of us got to know Tim when he was running for Governor, back in 2005.  In fact, a good number of us were involved with a blog called Raising Kaine, which passed on a few years ago.  We were also joined by several of his campaign staff:  Mike Henry, his campaign manager; Brandi Hoffine, his communications director, Nickie Titus, his new media director;  and Eli Kaplan, who had organized similar get-togethers for the gubernatorial campaign of  Terry McAuliffe back in 2009.

The entire conversation, over a pleasant dinner in an Arlington restaurant for two hours, was on the record.

Kaine began by talking about the three key issues on which he will contrast himself from George Allen – or should I say, on which he has already contrasted himself from Allen, since they have already debated.  First is the economy, where Allen is committed to “drill, baby, drill” (more in a bit); second is the budget; and finally is Common Ground, where Kaine focused on his record of getting things done.

During the 8 years of the governorships of Mark Warner (for whom Kaine was Lt. Governor) and Kaine, Virginia built a record of accomplishment, including of being the best managed state and being the best place to raise a child.   Yet Kaine accomplished this without control of the General Assemblhy (state legislature), having two years when the Republicans controlled both chambers and one year while they still controlled the House of Delegates.  Virginia changed in part because of an emphasis on education, because it swa income improve significantly, changing from a state heavily dependent upon agriculture to one with high tech.  It saw immigration, it emphasized talent and the institutions (K-12 schools, higher education) that contributed to the improved economic situation.

By contrast, Allen had a record on spending that contradicts his typical Republican message of small government and low taxes:  state spending increased by 45% during his tenure as governor, and in his previous tenure as Senator (ended through being defeated by Jim Webb in 2006) h supported all of the Bush excesses:  tax cuts that were not paid for, the unpaid for war, a record of turning the surpluses inherited from the Clinton administration into deficits.  He supported these actions while opposing “paygo” – no offsets were provided.  By constrast, except for the stimulus the Obama administration has paid for all of its initiatives.  As Kaine said, “you can’t just cut your way to prosperity.”  He also noted that further cuts to federal government spending would have a significant negative effect especially in Northern Virginia.

On Common Ground, he noted his experience of working with the Republican speaker of the House of Delegates, with whom he actually agrees on very little, but with whom he was able to get some positive things done, by returning again and again to the things on which there was agreement, such as finally banning smoking in public places.

Kaine also remarked on the recent Republican focus on social issues, calling the general thrust not only bad but insulting and patriarchal.

Each of the invited guests got a chance to ask at least one question.  Because Kaine is a serious Catholic (he served as a missionary in Honduras) and he was attacked in his gubernatorial campaign for the church’s position on Capital Punishment, the first question dealt with his faith, how it informs him and his decisions, and how the church’s positions on issues might impact them.   He made clear that he does not leave his faith at the door of his office, but it does not dictate his response.   His task is not to legislate theology.  He talked specifically about the church’s approach to immigration, but framed his approach through his belief in our desire to attract talent and the recognition that we were not about to deport 13 million or more people.  As he put it, we want to be the most talented nation on earth, not the nation with the highest fences.  He specifically referenced part of the Declaration of Independence, specifically where Jefferson offers this complaint against King George”

He has endeavoured to prevent the population of these States; for that purpose obstructing the Laws for Naturalization of Foreigners; refusing to pass others to encourage their migrations hither, and raising the conditions of new Appropriations of Lands.

Kaine believes that we should fine or tax those who came illegally as part of regularizing their status, and use those funds as one way to pay for better border security, which is not merely building higher fences.

As might be expected given the presence of an officer of Partisans, gay issue came up.    He is for repeal of DOMA, but is not yet fully ready to support gay marriage.  As governor he used his executive power for better rights for gay state employees and their partners, although his successor abandoned that.  He notes that on adoption the Virginia law allows married couples and individuals to adopt, and he would like to see adoption issues be based on the best interest of the child.

We had a discussion on corporate personhood.  He noted that the original intent of the 14th Amendment was that it was to apply to flesh and blood human beings, but that one cannot argue a corporation has no rights – if accused of a crime, is it not entitled to a trial by jury?    He believes that even within the framework of Citizens United it might be possible for the Congress to set up a system of limits on political contributions, and that it should be no problem to require complete disclosure (which we have in Virginia).  He pointed out that it might be possible to require a vote of shareholders for political contributions, but if so that requirement would apply for members of unions as well.

There was some discussion of the nature of Democratic Party of Virginia that is very much inside baseball for those of us there.  He acknowledged some problems, but also noted that he is running for a federal office which gives him little influence over the party’s operation.  He did note that in his travels around the state he is hearing a lot of  people being turned off by the Virginia Republicans focus on social issues.

Kaine would like to see a real reexamination of corporate taxation.   He thinks it unfair that a small business pays a rate of 35% when GE pays little or nothing.   He similar thinks it unfair a local business has to collect sales taxes while Amazon does not.  On national security issues, he disagreed with the President in part on Libya.  He thinks other than immediate crises (such as an imminent attack on the US) the President should always get the approval of Congress before committing our men and women to situations of conflict and combat.  When asked about the administration’s use of the Espionage Act to go after whistle blowers and similar issues, Kaine was forthright in his answer:  he does not believe we should be making national security exceptions rather than depending upon the institutions (including our civilian courts) that have stood the test of time.

A couple of observations about Tim Kaine.  He is very smart – like the President, he and his wife Anne Holton are graduates of Harvard Law.  His father-in-law, Linwood Holton, was the first Republican governor of Virginia since Reconstruction, but his Republican party was something far different than what we have now in the Old Dominion and nationally.   When Holton was governor his kids went to Richmond public schools.  Tim Kaine began in politics on Richmond City Council – in a city that is majority black he then became the mayor, before becoming Lt. Governor under Warner and then Governor, and chair of the DNC.

Tim speaks clearly on issues.   He listens.  He is willing to learn.  He is committed to service.

I am honored to know him.  He and I disagree on some issues – I pointed out that for most gays civil union is still not the same as marriage, and for most progressives they would want to see a commitment to marriage equality.  He acknowledged our difference, even as I pointed him at Loving v Virginia, a case he knows well.

He is committed to the process of governance, that government has a role, unlike his opponent, who in 6 years in the US Senate got exactly one piece of (very minor) legislation enacted into law.

This may well be the most competitive Senate race in the nation.  If the Democrats are going to hold the Senate, we will need to hold this seat.   He is already being attacked by the likes of the US Chamber of Commerce.   It is a race which could use your support.

Six years ago I actively promoted the candidacy of Jim Webb here.  Jim is not a progressive, but he was a clear improvement on George Allen.   With the help of many hear we narrowly won that race – 9,000 votes, a bit more than the margin in Montana but percentage-wise the closest Senate race, one which gave the Democrats the 51st seat they needed to control the US Senate.

I will continue from time to time to advocate here for Tim Kaine.  This seat is just as important this time around, if for no other reason than that we are again running against George Allen.

I thank you for reading.