It’s been pretty quiet on the blogs and in the NOVA media, but currently there is a hot Congressional nominating contest going on in Tom Perriello’s former district, the 5th CD. The candidates are Peyton Williams and John Douglass. As you can see here, 5th CD Democrats will hold a couple dozen caucuses this coming Saturday and Monday to select delegates for these candidates at the nominating convention on May 19. It’s possible, in other words, that we could effectively have a Democratic nominee by the end of this coming weekend, although given that delegates can remain unpledged, and also that there’s not much to hold delegates even if they are pledged, we’d all be better off waiting to see the final results next month.

Who will win? I don’t know, but I’ve been talking to the campaigns and to others “in the know.” Here are a few things I’ve heard.

*A robopoll of 817 likely 5th District caucus voters was conducted by Democratic polling firm Progressive Contacts for the Williams campaign. It found that 60% strongly supported or leaned toward Peyton Williams, with 35% undecided and just 5% supporting John Douglass. If this poll is at all accurate, clearly Williams is looking good for the nomination. The question is whether it’s at all accurate.

*To that point, one knowledgeable observer of the 5th CD who I respect told me that they didn’t think this poll was particularly meaningful. Personally, chalk me up as “skeptical.”

*I’ve also heard that the Douglass people are well organized for the caucuses, that they’ve received numerous endorsements (including former Democratic 5th CD nominee Al Weed), that their own polling is looking good, and that they have been out-fundraising Williams.

*The Williams campaign has been criticizing Douglass for (supposedly) being a “conservative Democrat” and for having “so far declined to make his policy positions public.”

*The Williams campaign is emphasizing that “politics is about people,” comparing itself to Jim Webb in 2006 and Tom Perriello in 2008. See one of Williams’ mailers on the “flip” of this post.

*The Douglass campaign is emphasizing their candidate’s endorsements, military experience (e.g., Douglass is a former General and Assistant Secretary of the Navy), electability, and ability to get things done in Washington, DC.

*Also of interest is that Douglass had been running for nearly a year in the 10th CD against Frank Wolf, before switching to the 5th CD after redistricting put his Fauquier County farm in that district. Replacing Douglass on the ballot in the 10th CD, by the way, is Kristin Cabral of McLean.

Anyway, stay tuned to the 5th CD, as things are about to heat up there big time. It’s even possible that we’ll have a de facto Democratic nominee by the end of this weekend to take on the abysmal Rep. Robert Hurt (Tea Party). For sure, we’ll know by May 19. My attitude: may the best Democratic candidate win! 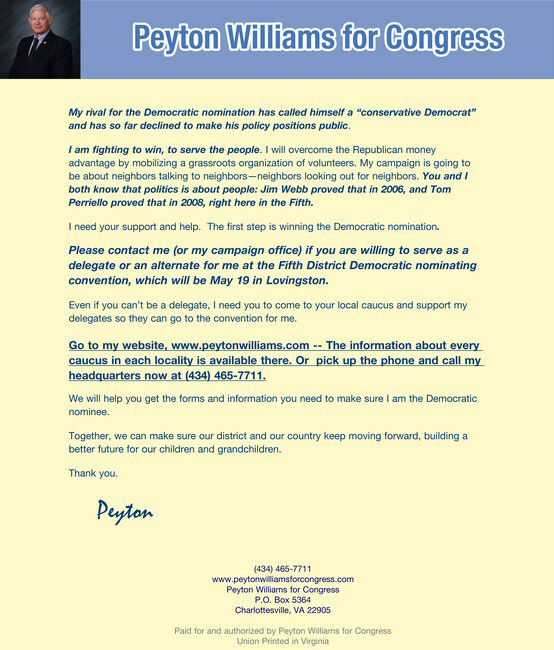