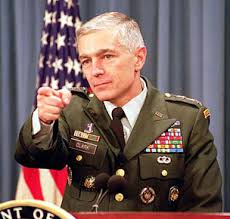 I was just on a pre-debate conference call with General Wesley Clark (ret.) and Obama for America National Press Secretary Ben LaBolt. Here are a few highlights.

*Ben LaBolt said there’s a high bar for Mitt Romney tonight. We’ve seen his audition on the world stage, where he alienated our allies, identified Russia and not Al Qaeda as our greatest foe, etc. In contrast to Romney, who’s been all blunder and bluster, President Obama has been strong and steady.

*Gen. Clark said we’ve had steady and strong leadership with President Obama, while Romney has had a lot of bluster, dangerous blunders, and fewer specific policies than any presidential candidate in [Gen. Clark’s] memory.

*For instance, Gen. Clark pointed out, it’s astonishing that Romney never put forward a plan to end the war in Afghanistan or go after Al Qaeda. Even more astonishing is that he took a foreign policy trip overseas and managed to insult America’s closest ally.

*At a minimum, in Gen. Clark’s view, Romney must answer the following specific questions or he’ll have fallen short of the Commander in Chief threshold. And remember, this debate should be about SUBSTANCE not style.

*First, how would Romney finish the job against Al Qaeda, and what would he do differently than President Obama? Especially given that Romney said it wan’t worth moving heaven and earth to get bin Laden, and that it would be ill considered to go after Al Qaeda in Pakistan, this is a highly relevant question and the American people deserve an answer.

*Second, how would Romney end the war in Afghanistan? The real reason we went there was to decimate Al Qaeda and prevent the return of a safe haven for terrorists. President Obama will use savings abroad to do some nation building at home. Romney failed to mention Afghanistan in convention speech, now says he has to wait until he’d be in office to offer a plan. It’s expected of Romney to outline specifics, just as Obama did in 2008. Will Romney commit to end war in 2014? Will he keep troops on the ground, how many, what would their missions be?

*Third, after months of reckless bluster, how would a President Romney work with other countries around the world to achieve our national security objectives? So far, it sounds like Romney wants to return us to go-it-alone, cowboy diplomacy of the previous administration. When President Obama took office, our relations had been severely strained by go-it-alone approach. America was isolated more than our enemies. Today, those relationships have been rebuilt, and we’re stronger because of it.  We have the toughest sanctions on Iran in history. How would Governor Romney work with UK if he couldn’t even get through a photo-op visit without insulting them? How would he work with the other members of the G8 when he’s spoken negatively of almost every one of them?

*Fourth, what exactly would Romney have done in Libya? Romney’s been all over the map on Libya, calling for military action sooner, then saying it was too aggressive, then saying the world was a better place because the effort succeeded. HUH?!? We worked with NATO and Arab partners, got rid of Qadaffi without putting American troops on the ground. What EXACTLY would Romney have done to protect the Libyan people? How can Romney reconcile his statements that our operation in Libya was both too slow AND too aggressive? What about Rep. Issa’s decision to release sensitive information on Libya?

*Bottom line, in Gen. Clark’s view: If you want to be Commander in Chief, leader of free world, tell us what your policies would be.

*Labolt added that he would anticipate a discussion of Romney’s hypocrisy on China (e.g., pioneer of outsourcing, now claiming we’re not tough enough on China).