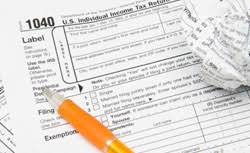 Mitch McConnell says revenue is off the table. That is the heart of the problem. Already the fixes which were purported to raise revenue actually increase the deficit by $4 trillion. That’s because beneath the surface of the recent tax “reform” was its opposite hidden from plain view.

Yet both before and after the “reform” we do not have a deficit problem as much as we have a revenue problem. More specifically, we have a tax avoidance problem, a profligate tax-cutting problem, and a tax unfairness problem.   This is one estimate of how much the rich avoid paying taxes, most legally. But some relatively easy fixes could make a huge difference. For example:

3. Close illegal tax havens: $250 billion (probably a huge underestimate because between $21 and $32 trillion are parked in offshore accounts).

5. Add a half-cent financial transaction tax: $500 billion.  Let those churning the market pay a tax for doing so.

8. Raise the top marginal tax rate for those making a million to a billion dollars a year to 49%. $872 billion

This second list produces 6.2 trillion in cuts over 10 years.

According to the Center for American Progress, we can save $168 billion just by not rewarding the offshoring of US jobs. What stands between a more balanced budget and an unbalanced one are the Dumbo Twins, Mitch McConnell and John Boehner. They’ve done everything they can to continue to protect the rich. And they have proven unequivocally that they do not really care about the deficit–not that we should obsess about the deficit at this point in the recovery.

Right now, we have a jobs problem and a revenue problem. An improving economy and real fixes on the revenue side would solve much of the problem. But the Dumbo Twins have got an act going. And they’d rather play games than create real solutions.

* Note, though, that this is misleading because Social Security has its own funding stream and is not related to the deficit. Doing this fix would shore up Social Security’s future, but not solve the deficit unless it was wrongly directed away from Social Security, which would set a dangerous precedent.