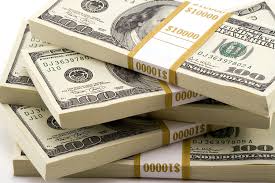 Have you seen a horror movie recently? Any interest in checking one out? Well, no need to spend $10 on a ticket, plus whatever ungodly sum they charge for artery-clogging popcorn and diabetic coma-inducing candy and soda. Nope: if you’re a Virginia Democrat, or simply a Virginia citizen who doesn’t want to see our state plunged into the Dark Ages by the Teahadists, all you need to do for a serious scare is check out cash-on-hand numbers over at VPAP. From a progressive and/or Democratic point of view, they’re terrifying.

So, which party has all the money as we head into an election cycle during which every single House of Delegates seat will be up for grabs (and in which Dems currently hold only 32 seats out of 100)? Hint: it’s not the one with the donkey as a logo. To the contrary, as of December 31, 2012, Virginia’s Republicans held an elephant-sized cash-on-hand advantage over Dems of something around $4.5 million. That’s right, it’s approximately $6 million “red team” to about $1.5 million “blue team” (note: I say “approximately” and “about” because it depends exactly what you count; also, there’s at least one strange-looking number in there, for Adrianne Bennett, who either has $211,000 or minus $42 cash on hand, depending on which page you look at). [NOTE: See the “flip” for a list of the top Democratic cash on hand totals]

Clearly, part of this advantage for the Republicans is that they’re in the majority, and it’s a lot easier to raise money when you’ve got the power. Another advantage is that they get reams of money from the usual suspects – corporations, fossil fuel interests, etc. Still, the fact that the gap is so large is disturbing. The question is, what are we going to do about it?

In talking to Democratic delegates, one theme I keep hearing is that Terry McAuliffe will be spending a ton of money in 2013, and that this will help Democrats up and down the ballot. My view is that while T-Mac is likely to spend a lot of money, no doubt, there’s no guarantee that this will help House of Delegates candidate per se. We’ll see. But regardless, I don’t believe that House of Delegates Democrats should be relying on T-Mac or anyone else, other than their own efforts.

What I’d do is threefold. First, I’d heavily ramp up fundraising efforts by “safe blue district” Democrats, with the goal of using that money to help other Democrats take back as many as possible of the 18 HoD districts carried by President Obama in 2012, but currently held by Republicans. Second, I’d start making a play for national, grassroots/netroots money, leveraging the fact that Virginia will have the marquee political races of 2013, as well as the fact that there are some perfect Republican “villains” (anti-LGBT, anti-women, anti-immigrant, anti-environment, anti-healthcare, just generally wacked, etc.) we can point to (and ask for help in stopping them). Finally, I’d ramp up fundraising efforts with major national individual and institutional donors (e.g, LGBT, abortion rights, enviro groups) to bring in millions of dollars this year.

Obviously, all of this will take effort. And yes, I’m aware that we’re caught in somewhat of a vicious cycle, where donors ask why they should give money when we don’t have any power anyway, but where we’re not going to have power unless we start winning elections, and where that’s not going to happen unless donors start giving money. What we need to do is figure out a way to break that vicious cycle and start turning it into a virtuous cycle, where we start picking up seats in the House of Delegates, where that leads donors to sense the potential for getting back into power, and where that leads them to pour money into top-quality Democratic House candidates. No, it’s not going to be easy, but what are our other options? Give up? Screw that! Unless, of course, the thought of a state governed by Ken Kookinelli and a Teahadist-controlled General Assembly appeals to you. No, I didn’t think it would.

It Wasn’t Your Imagination; In the 2021 General Assembly, Virginia Republicans Really Did Oppose Progressive Legislation Nearly Unanimously (Any further questions about whether elections really matter?!?) https://bluevirginia.us/2021/03/it-wasnt-your-imagination-in-the-2021-general-assembly-virginia-republicans-really-did-oppose-progressive-legislation-nearly-unanimously