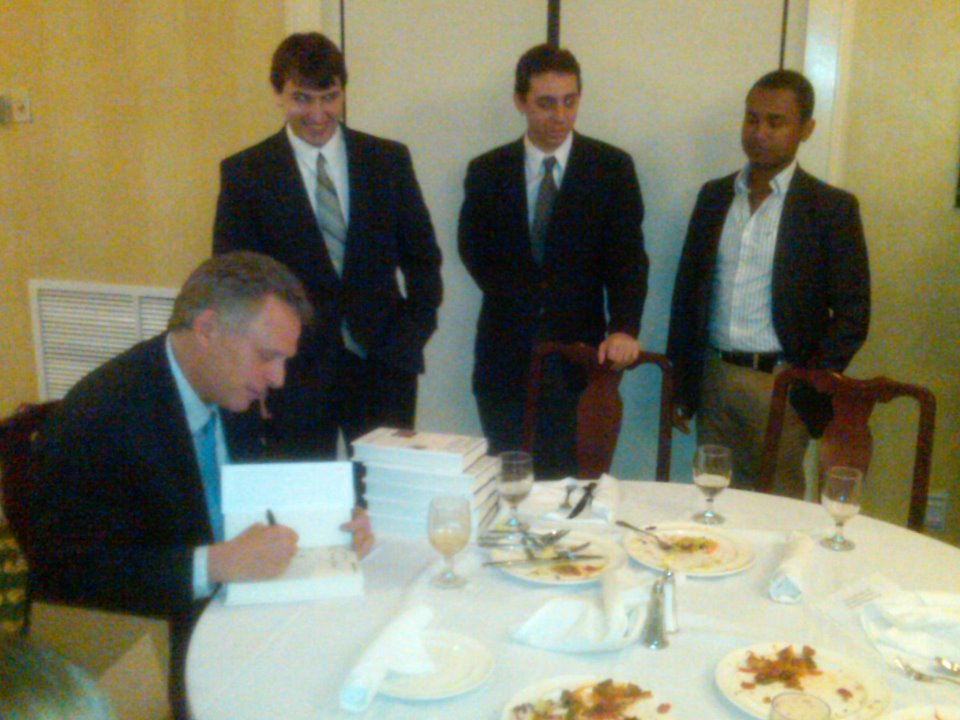 Earlier today, a media outlet known as Watchdog.org (“Virginia bureau”) wrote a story trying to link the whole Sen. Menendez-Salomon Melgen “scandal” (“scandal” is in quotes because there’s no evidence that anyone did anything wrong) story to Virginia Democratic gubernatorial candidate Terry McAuliffe. How do they do this? Pretty much it’s all based on one very small thing – completely unsubstantiated rumors that T-Mac was somehow with these guys. Thus, according to Watchdog.org.

With probes heating up in Miami and Washington, questions have arisen over whether McAuliffe may have been on one of the “Air Melgen” flights to the Dominican Republican, where two local prostitutes claimed they were underpaid to have sex with Menendez around Easter-time last year.

The problem is, the Watchdog.org “reporter” has absolutely no proof of any connection to Terry McAuliffe. Apparently, he didn’t look into where Terry was during the time in question. If he had, he would have found these pictures of Terry, on the date in question (“around Easter-time” last year), with his family, right on Facebook.

April 8 2012 (“The family together in their Easter finest. Hope everyone is enjoying their day”)

Instead, Watchdog.org just went ahead and wrote a story that basically says, “We don’t know where Terry was, and didn’t look particularly hard (if at all), but what the heck, that’s good enough for us to put it out to the world that McAuliffe was hanging out with hookers.”

Again, the photos of T-Mac showing where he was at the time this supposed “scandal” took place are pretty easy to find, for anyone who takes a few minutes to look. Instead, the Watchdog.org folks have opted for hackery and innuendo.

So, who are these Watchdog.org folks anyway? Here’s the Sourcewatch article for the Franklin Media Center, which is Watchdog.org’s financial backer. Note the ties to our friends the (far-right-wing, Cuccinelli-supporting, dirty energy mogul) Koch brothers!

The Center’s Director of Donor Relations Matt Hauck is a former Associate at the Charles G. Koch Charitable Foundation…

The Center’s 2009 IRS 990 form lists Rudie Martinson as director and secretary, who formerly worked as the assistant state director for North Dakota’s chapter of Koch’s Americans for Prosperity.[13]

The journalistic integrity of these sites has been called into question by media watchdog groups. Laura McGann, assistant editor at the Nieman Journalism Lab at Harvard University, wrote that the Franklin Center is backing news organizations who engage in distorted reporting across the country. “As often as not, their reporting is thin and missing important context, which occasionally leads to gross distortions,” wrote McGann, who pointed to several instances where the Watchdog websites wrote stories that turned out to be misleading or untrue. [24]

In short, this is a Koch brothers-funded group whose purpose, among other things, is to smear Democrats. Which is exactly what they’ve tried to do in this case. Pathetic.