Intro: Recently, the McAuliffe for Governor campaign graciously provided Blue Virginia editors lowkell and kindler the opportunity to interview Terry for 45 minutes at his campaign HQ in Arlington. The following interview is edited for length and to focus on highlights of our conversation. We posted the first part of the interview yesterday; this is the second and final installment. Cross-posted at Daily Kos.

“Education…is an investment, not an expense”

lowkell: Ken Cuccinelli likes to say he’s “Frugal Ken” and you’re supposedly “Union Terry.”  Two part question: First, I’m wondering what you think of Cuccinelli’s claim to be “frugal,” especially given his waste of money pursuing climate scientists and all this frivolous litigation he’s mostly lost — and his plan is to have these huge tax cuts for the wealthy and for corporations, which would blow a massive hole in Virginia’s budget.

Terry: Well, “Frugal Ken” is a cute little slogan.  But this election is not about cute slogans — we’ve got big issues facing us, many of which we’ve already discussed. It’s not frugal if you’re going to go before people and say I’m going to give you a $1.4 billion tax cut per year. I would love to run for governor and promise you billions of dollars in tax cuts. But I won’t do that, because I’m realistic and honest. That is fiscally irresponsible.

I thought the debate was pretty clear — he was asked how he was going to pay for it and he could not answer. Which tax incentives are you going to eliminate? He could not give one. So it’s slogans. I’m not going to do that. As you know, Vince Callahan, who was the longest-serving Republican House of Delegates member, former chairman of the House Appropriations Committee, came out and said this would blow a gigantic hole in the budget. It would wreak havoc at the local level.

And at the end of the day, it would most likely just take money out of education and public health. At a time we need to be investing in education — which is an investment, not an expense — you’re going to be taking this money out of education, not saying how you’re going to pay for it? What people want in their governor is an honest approach, bipartisan, fiscally responsible, like you had with Warner and Kaine, protecting our AAA bond rating while investing in education.

“I’m tired of the demonizing, the dividing of folks…when I’m governor, I’m going to work with everybody”

lowkell: As for the “Union Terry” label, I’m wondering what your views are on the best ways to stand up for working people, in contrast to Cuccinelli’s union-bashing.

Terry: I get support from union members, and to be very honest with you, I’m proud to have their support. And I’ve said this over and over: I’m tired of the demonizing, the dividing of folks. This constant diving of people — it’s not helpful, it’s not constructive, it’s not how I’ve led my life, and I get tired of hearing it. I get tired of hearing my opponent attack teachers. All I can tell you is when you divide people, you hurt Virginia.

“He says that the jobs created by the Federal government are not good jobs. Well you tell that to everybody in Northern Virginia and Hampton Roads”

kindler: The Obama campaign proved that Democrats can win Virginia if we get young people and minority communities out to vote. And the Deeds campaign showed what happens when we don’t — losing by 17 points to Bob McDonnell. Speaking directly to these communities, what is your message to them?

Terry: Great question and I think that encapsulates everything I talk about. First of all, if you’re a young person, what are you worried about? You’re getting out of college, a lot of debt, you want a job first and foremost. So the big things I talk about, diversifying this economy, getting all these new sort of industries — cyber, nano, bio — all these new things I get excited about — big data, analytics, all that great stuff, that’s what we have to focus on. So I’m telling young people, I want you to stay in Virginia. It’s the same thing I say to my five children: stay here. We’ve got to have those jobs of the 21st century.

So if I’m a young person out there today, I’ve got to make the decision. Who’s going to make Virginia the place where I’m going to get the job that I want? I get concerned about young people getting out of college today in debt and taking jobs that they don’t want to take but have to. I tell young people, I’ve tried so many different things in my life, taken a lot of risks, a lot of chances, I enjoy doing it.  And you learn by all those great experiences. I want to make sure people can make decisions for their quality of life, that they’re doing the things they want to do.

I want to make sure that young people have those exciting choices available for their future, but also a great place to live.  But not with this anti-women’s health, anti-gay, anti-immigrant stuff. So if I’m a young person out there, I’d be saying, let me get this straight: one guy’s all for the transportation approaches to ease our congestion, for the Medicaid expansion that would create tremendous economic opportunities, freeing up hundreds of millions of dollars in the general fund budget by taking this money we’re spending today that we don’t have to and focusing it on education? I think this guy’s really going to work his tail off to diversify this economy, and do what he has to do to bring businesses here. That’s why I’m running and I think it’s a clear choice in this election.

As for minority communities: very important for turnout. As I said in the debate, one of my proudest moments as governor will be when I can stand with Alfonso Lopez signing the Dream Act.  We got it further than it’s ever gone before, and while I hope the Federal government gets immigration done, we need to do our part here in Virginia. Also, a tremendous issue for the African-American community, when I visit with them as I just did in Richmond, is the quality of education, especially pre-k, early childhood education. That’s what they tell me they’re worried about.

“I’d put together an independent ethics commission: people who are being investigated should not investigate themselves”

kindler:The State Integrity Project ranks Virginia 47th among the 50 states in its state corruption index. Our system seems outdated from the lack of campaign finance laws and gift bans to many other issues. Will you be a reform governor, and what would you do to reform the state?

Terry: There are a lot of things I’d love to reform.  The first thing I’d propose, on day one, is a $100 gift ban. We will take no gifts over $100. The same guy who’s been giving gifts to the governor has done it to Ken Cuccinelli — it’s the New York trips, it’s the Smith Mountain Lake, the many times in his Richmond home, it’s the $1500 Thanksgiving dinner, it’s also buying stock in his company and not disclosing it, and then, as the New York Times reported last week, selling the stock after he spent a weekend with him.

Let’s get rid of that — so I’m very clear: when I’m governor, nobody can give me anything over $100. I’d make it zero but you’ve got to get some commemorative items, keys to cities and things like that.  And for my whole family — this idea that I’m not giving it to the governor, but they’re giving it to my daughter — sorry, I don’t buy it.

I’d also put together an independent ethics commission: people who are being investigated should not investigate themselves. I’ve laid it out on my website how they all get picked.

Another big thing I’d like to get done — I don’t like this partisan redistricting. I would love if I could get something done with real teeth — it won’t be until I leave, obviously, it would be the next governor — but if we could get something done where we have non-partisan re-districting, that would be the most important thing we could do, because I really do believe that this has been a core problem with democracy.

“There are no silo campaigns this time around, we’re all working with each other”

lowkell: What do you see as the prospects for increasing the share of Democrats in the General Assembly?

Terry: Well, we’ve got a great campaign running, we’ve got a lot of folks on the ground, and we’ve been very active in the House of Delegates financially, more than any other candidate — we are all in.  We’ve made a very substantial financial commitment to them, we’ve told the House of Delegates members they can use our offices, we’re sharing data. Mark Herring, Ralph Northam and I are appearing together every week, running as a true ticket. There are no silo campaigns this time around, we’re all working with each other. So I think we can pick up some seats in the House of Delegates, and I tell folks, we need to look at this as the beginning of a ten year plan of what we need to do.

They’ve done a very good job of recruiting, we’ve got a lot of candidates on the field, so it’s all about turnout, which is what we work very hard at, but the [district] lines are the lines at the end of the day. 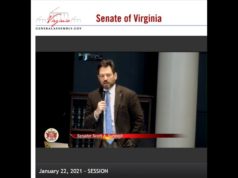