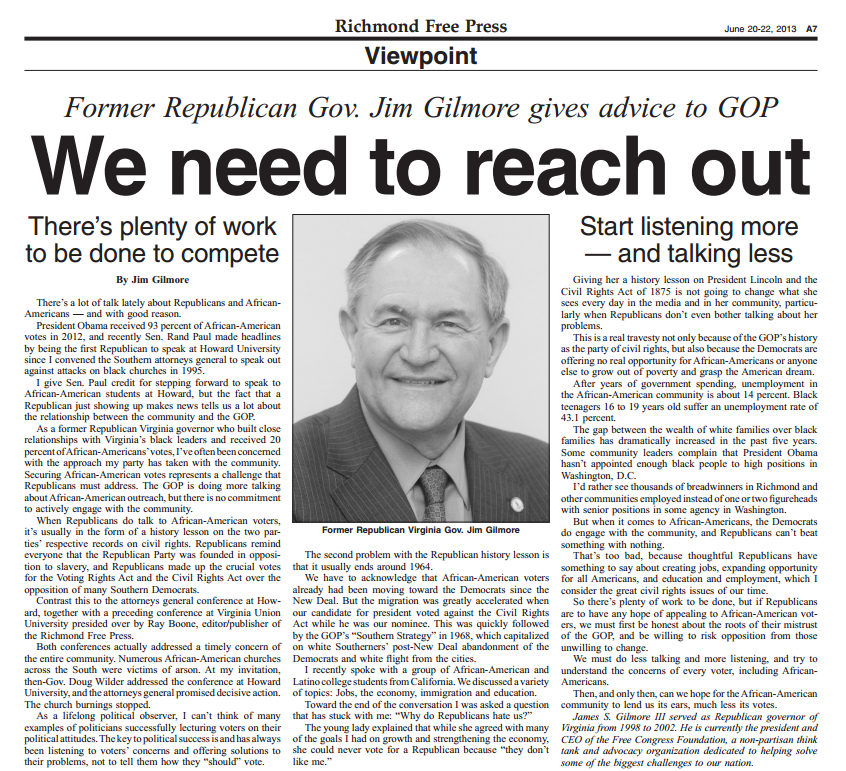 Clearly, former Virginia Gov. Jim “No Car Tax” Gilmore is a right wingnut – and a loser – of the first order. Still, he was elected Governor of Virginia, also served as Chairman of the Republican National Committee, as well as President/ CEO of the Free Congress Foundation. Presumably, he’s still very well plugged in to Republican thinking. Which is why when somebody tipped me off that Gilmore had written an op-ed in the African-American-oriented Richmond Free Press on how Republicans should go about winning back the African-American vote (click on image at right to “embiggen”), I was curious what he had to say. I mean, you know, even a blind squirrel finds an acorn occasionally, so you never know, right?

Except…no. Jim Gilmore’s op-ed is so stale, silly, insipid, stupid, it might have been written by a squirrel. A dead one. Seriously, check out what Jim Gilmore thinks passes for wisdom, with regard to Republicans winning back African-American voters, after years of convincing 95% of them NOT to vote Republican if they were the last party on earth!

Gilmore Lesson #1: Go back 50 years, 150 years (to Lincoln, perhaps?), whatever it takes to find a time when the GOP actually gave a crap about civil rights, helping African Americans move up the ladder, etc. Talk about “the GOP’s history as the party of civil rights,” which ended in the 1960s, when the former “Party of Lincoln” took on the former “Dixiecrats” (Strom Thurmond, Jesse Helms, etc., etc.) and switched to the infamous “Southern Strategy” – “gaining political support or winning elections in the Southern United States by appealing to racism against African Americans.” Sadly, that “Southern Strategy” hasn’t changed a great deal for decades, with Republican political candidates talking about “welfare queens,” Willie Horton, “black hands”, “minorities” loving “Obamacare” (and other benefits the “47 percent” supposedly get from the government, making them suckers for voting Democratic). What a pathetic joke that Jim Gilmore (and presumably other older, white, male Republicans like him) thinks African Americans would possibly vote for a party which holds them in such contempt, and which uses FEAR of them to win the votes of white racists. Wow.

Gilmore Lesson #2: Lie through your teeth, totally reverse reality. Thus, according to Gilmore, “Democrats are offering no real opportunity for African-Americans or anyone else to grow out of poverty and grasp the American dream.” In reality, of course, almost every single federal program – Social Security, Medicare, Medicaid, Head Start, the GI Bill, investment in crucial infrastructure and education, etc, etc., has “Democratic” written all over it. To the contrary, essentially the only thing Republicans have offered the past few decades has been supply-side/trickle-down economics (aka “Voodoo economics”), crony capitalism, unpaid-for wars, and massive dis-investment in America’s future, America’s urban areas, America’s people. Other than that, Republicans offer a great deal to people…if you’re in the top 0.1%, perhaps. Again, does Jim Gilmore really think that people of any color – black, white, whatever – are so stupid that they’re actually going to believe that the party of the rich and of big business gives a crap about those who are NOT rich or big business? If so…wow.

Gilmore Lesson #3. That’s really about it, other than throw out a few more lame attacks and bromides. I just wanted to make one more point, actually a question: Why on earth would Jim Gilmore write a column about how Republicans need to reach out to African Americans in an African-American newspaper, and not in a Republican newsletter or whatever? After all, it’s not African Americans who need to change, it’s Republicans who are doomed to losing national elections indefinitely, as long as they keep alienating African Americans, Latinos, Asian Americans, and enlightened white people. So, again…why is Gilmore spreading his nonsensical ramblings to African Americans (95% of whom are Democrats), and not to Republicans? So weird.

Bottom line: if this is all Republicans have to offer, they won’t be winning back African-Americans’ votes for a long, loooooong time to come. #FAIL