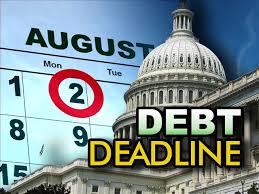 If I were President Obama, I would announce:

“Two years ago, the Republicans in Congress took this nation to the brink of disaster, threatening to make the nation fail to pay its bills, damaging the faith and credit of the United States. They used the threat of making the nation default as a means to extort concessions, saying, in effect, ‘Meet our demands or we’ll hurt America.’

“We reached a deal, one from which we’re still suffering today. But the mere fact that the Republicans –one of our two major parties– had made such an irresponsible threat, and brought the nation to the brink, was enough to set back our economic recovery, to cost the American taxpayers billions, and to damage America’s reputation in the world.

“That’s not going to happen again. There will be no crisis over the debt ceiling this time

“I am convinced that it is in my presidential powers to make sure that we pay our bills. The 14th amendment declares that, “The validity of the public debt of the United States, authorized by law, … shall not be questioned.” I believe that part of the U.S. Constitution invalidates the legislation that creates some artificial debt ceiling, thereby calling into question whether bills already incurred will be paid.

“Congress already spent the money. I’ll see to it that our debts get paid.

“If the Republicans want to challenge my right to protect the full faith and credit of the United States, I’ll be glad to defend my position in Court.

“In the meanwhile, I will defend the American people, and the health of the American economy, and our international standing against injury inflicted by political blackmailers.

“If the debt ceiling procedure has not been challenged before, that’s because never before –in the course of several generations– has the debt ceiling been used for purposes of extortion. Eighty-some times, the United States raised its debt ceiling as needed –to pay bills already incurred– on a bi-partisan basis. It was simply understood that we don’t pay politics with the nation’s credit.

“But that was before we had a political party willing to damage the country in its insistence on ‘My way or the highway.’

“Now that we see how dangerously the debt ceiling provisions can be abused, we’ve had to re-examine the whole premise of that process.  In the course of that re-examination I have been advised, and am now persuaded, that a crisis of the kind we had in 2011 would represents a violation of the 14th amendment.

“I’m not going to let that happen again. There will be no extortion this time, no rewards for blackmail. I will see to it that the country pays its bills.”

Here’s why I think this is a politically good move for the president.

Obama can accomplish next to nothing so long as these Republicans –who have shown they have no interest in making our government work for the good of the nation– control the House.

Therefore the president’s political efforts should be directed at defeating the Republicans on 2014. Without a real victory in the congressional elections 15 months from now, all the rest of Obama’s presidency will be as crippled as it has been the last two and a half years.

This is one move toward achieving that victory. (I’ve got another move in mind I’ll post another time.)

This move has the virtue that it gives the Republicans two options, both of which would or should strengthen the president.

Either they will refrain from attempting to make a crisis over the debt ceiling, or they will drive us into another crisis.

If they refrain, it will look like the president intimidated them into backing down. Looking strong and effective is always good for a president.

If they choose to challenge President Obama by going forward with another attempt at extortion, they’ll provide him with an exceptionally good opportunity to show the American people what unpatriotic, irresponsible scoundrels these Republicans are.

With that latter scenario –about which I worry only about the president’s ability to play his winning hand– the dramatization of the dark and destructive nature of the spirit that’s driving the Republican Party can be followed by the president’s still going ahead with the decisive move he promised– the unilateral step of by-passing the debt ceiling on his own authority.

And again he would look strong.

Then he can beat the drum to get the voters to turn this appalling Republican majority in the House out of office and out of power.