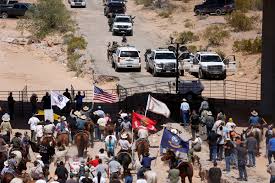 It’s now a few weeks since some “conservative” leaders, like Sean Hannity, walked out on the weird plank of making heroes of the Cliven Bundy crowd for confronting federal officials and then had it sawed off behind them when Bundy, swollen with his folk-hero status, shared with the country his racist views.

I’ve always hated racism — I mean always, even before the age of five — and I’m glad that in America today, as the affair of the LA Clippers’ owner also showed, racism cannot be exposed to the public light without condemnation. I’m glad that these “conservatives” felt compelled to distance themselves from Bundy and his racism.

But for someone who knows anything about American political history, there’s something really new, something disturbing, something weird about the idea that these right-wingers had to repudiate the racism, but were happy until then to declare as heroic what Bundy and his armed supporters had been doing and saying.

For a century, American patriots — especially on the right — regarded the intention to “overthrow the government of the United States” as the complete opposite of patriotism. No greater enemies existed, in conservative America, than those — whether they be anarchists in the late 19th and early 20th centuries, or communists after the Russian Revolution — who sought by deed or even word to undermine the American system of government.

But here is Cliven Bundy — who declares out loud that he doesn’t even recognize the existence of the federal government created by the U.S. Constitution, and here are his gun-toting followers calling for county sheriffs around the region to forcibly disarm the agents of the federal government — described as patriots by a Republican U.S. Senator from Nevada, and called heroes by major spokesmen, like Hannity, for so-called “conservative” America.

How does this happen? How do things turn into their opposites?

As much as I hate racism, I understand that it’s there, it’s been there for centuries, and whether racists keep their mouths closed or (like Bundy) speak up or (like Sterling) get recorded expressing their private feelings, that racism is a toxin in the American body politic that isn’t about to disappear.

We’re right to do all we can to keep that racism from governing how our society functions, but still it’s something we have to live with.

But with this anarchism on the right, we have something new and dangerous.

To not only legitimate but to celebrate an assault on the very system of government that’s enabled us to have as benign a history as, overall, we have had; to make a hero of a man who’s disobeyed the law, who failed to abide by court rulings, who surrounds himself with armed men to resist federal authority– that is to call into question the very foundation of a decent society.

It’s an assault not only on the Constitution, but on the very “rule of law” that makes all other forms of social justice and decency possible.

The importance of upholding the rule of law is at the heart of genuine conservatism. Yet on the right in today’s America, we find the very opposite.

First, in the previous decade, they gave us the most lawless president in the history of our nation. Now they make heroes out of a free-loader on horseback who postures as a patriot while he assaults the law and works to subvert the constitutional system of the United States.

To such perversions of conservative values, to such dangerous impulses of outlawry and anarchy, to such harbingers of potential bloody chaos — attention must be paid.