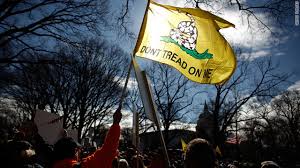 Namely, Eric Cantor’s losing his seat to a challenger from the right, and Delegate Puckett conspiring with the Republicans in the Virginia legislature to give them control of the Senate, apparently in exchange for a goody he won’t now be able to collect.

I worked to convey something important to the presumably conservative audience about the deep problem with the Republican Party if a guy with a 96% rating from the American Conservative Union gets challenged and beaten from the right.

I commend the show to your attention, at