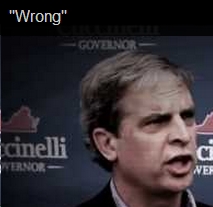 Who even knows what Republican State Senator Mark Obenshain is babbling about here. So many logical flaws and internal contradictions, so little time to mock them. First, here’s Obenshain’s “argument,” using the word very loosely, in a nutshell:

1. Obenshain asserts that in last weekend’s “Democratic Party-run firehouse primary to choose the party’s state senate nominee in the 16th District special election, Democrats — free to adopt any voter identification standard they wished, or none at all — opted for requirements considerably more stringent than those contained in the state law they denounce, actually going so far as to require that IDs show the address at which the individual is registered.”

2. Obenshain adds, “When the party establishment’s candidate lost, the cries of massive voter fraud started rising from the most unlikely of places, with the local Democratic committee refusing to certify the election results, citing possible voter fraud.” But, he adds sarcastically, “as the DPVA always tells us, voter fraud doesn’t exist.”

In short, Obenshain is claiming that Democrats are hypocrites for fighting voter ID laws, but then requiring voter ID in their own “firehouse primary” (for former Senator Henry Marsh’s seat) this past weekend.

Just a few problems here. First, Obenshain outright admits that he “[doesn’t] know what happened in the 16th District — whether this is just sour grapes from party leaders who didn’t get their way, or if there were in fact irregularities.” That’s right, he has no idea what exactly took place this past weekend (and from what I’ve heard, it was a mess in many ways – just not because of anything to do with voter ID), but he’s talking about it anyway. LOL

Second, Obenshain then undercuts his entire case to tighten up Virginia’s voter ID laws, admitting (for the first time publicly?) that he does NOT “believe that voter fraud is widespread” (actually, its statistically nonexistent). So, then, why go to such lengths to make it harder for Virginians to vote, for no good reason other than to address a supposed problem that Obenshain himself doesn’t even believe exists?!? Is this the same sort of “logic” Obenshain used to first push to criminalize women for having miscarriages, then deny that he did just that? Craaaaaaazy.

Meanwhile, an astute commenter on Obenshain’s tirade note that the “firehouse primary discussed above is a different issue – not a general election, not run by the Virginia State Board of Elections, etc.” This same commenter also astutely notes that “[b]oth parties have been disconcerted about the possibility of cross-over voting and more in elections over the last year (especially since the Cantor-Brat race); some have advocated party registration, and more.”

Finally, the same astute, reality-based commenter points out that Obenshain has “pushed for a costly law, addressing a problem that does not exist (in-person voter fraud), and likely increasing one that does (absentee voter fraud.)” Brilliant, no?

P.S. Just remember, this guy – Mark “Criminalize Miscarriages” Obenshain – came within 166 votes (out of 2.2 million cast) of becoming Attorney General of Virginia last November. Instead of this right wingnut, fortunately we have Democrat Mark Herring doing a superb job on a wide number of fronts – LGBT equality the one in the news today. So, to anyone who claims that “my vote doesn’t matter,” or “why bother getting involved,” just refer them to the enormous, glaring difference in people’s lives due to the razor-thin victory of Herring over Obenshain in 2013. As they might say in the Attorney General’s office, “case closed!”