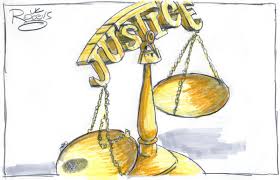 When we think of corrupt judges, we usually think of someone being bought off – money under the table to fix a case. When we look at the decisions being handed down by today’s so-called “conservative” justices  – particularly, but not only, on the Supreme Court — we see a corruption of an altogether different sort.

Looking at the contorted reasoning behind the recent decisions – in Citizens United, in Hobby Lobby, in striking down part of the Voting Rights Act, and most recently by the two Republican-appointed justices on the DC Circuit Court of Appeals in a ruling to devastate part of the Affordable Care Act – who can believe that these GOP judges were trying to serve the rule of law or the Constitution?

The bending and twisting of the law reveals that it is the conclusions that dictate the reasoning, rather than the other way around. Rather than let the law, precedent, and the Constitution dictate the direction, it seems that it is the destination –  the result – that these Justices take as the given.

And the destination, in turn, is what advances the interests of the masters they are serving.

Nothing blind about this “justice.” Is there a single case, where important interests of those masters were at stake, that the Roberts court ruled against them?

Another point to be made-about results-oriented decisions. Results need not be irrelevant in interpreting the law. The uses of the Constitution are not purely mechanical and deterministic. There is and should be some flexibility in how it is applied. That’s why we want wise people on the bench.

Of the various forms of “wholeness” in human affairs, it is specifically justice whose purpose is to act as the antidote to the toxic effects of power.  Injustice is what the mighty inflict upon the weak in a world where (in Thucydides’ words), “The strong do what they can, while the weak suffer what they must.”

It is one thing to bend the law to aid those who are the victims of injustice. It is altogether different to twist it to serve those already so strong that they can take more than their fair share.

But this is the nature of the corruption of these Justices: they serve the very masters that — in a just society – most need to be held in check.

Serving the wrong master is like taking a life-long bribe, and therefore it is the more dangerous form of corruption.

The bribe-taker perverts justice on a case-by-case basis, and of course bribery does tilt the system in favor of those who have the money to offer the bribe. But the servant of the wrong master is essentially an agent of a private power, a mole. Having given allegiance to a system of private power, such a mole can then be moved up the ladder to higher and higher levels of judicial power. (This is what John Roberts’ career looks like to me.)

In this way, over time, a powerful force can build a Court that is ruled by its agents. They sit on the Court and wait for the cases that can be used to change democracy into plutocracy, to victimize the victims and empower the powerful.

This is the worst form of judicial corruption.